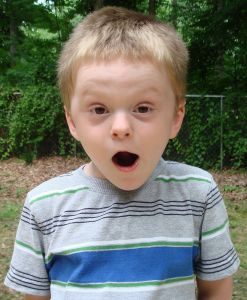 The split-second before I very suddenly became a Christian I couldn’t have been less of a Christian if I had red horns, hoofs, and a long pointy tail. If anything, I was anti-Christian. The religion struck me as ridiculously immature, a way-too-obvious system designed mostly to capitalize on people’s guilt: Big Daddy in the Sky knows you did wrong, but will love you anyway if you’ll only admit that he’s perfection itself, and that you’re a wretched, sickening sack of sin.

And it wasn’t like I didn’t believe in anything. I did. I very seriously believed in me. I hadn’t a doubt in the world but that I was somebody truly worthy of my utmost affection and devotion. I was strong, capable, friendly, competent — I was just a general, all-around good guy. I was thirty-eight years old. I’d been happily married for sixteen years. I had a good job. I had friends. People liked me. I liked me.

Because I knew that, at my core, I was a good, morally sound person.

On the other hand, I was a human being. And human beings, I knew (boy, did I know) have natural needs, and natural weaknesses.

The paramount imperative, I believed, was to love myself. That’s what it was all about: loving, and forgiving, oneself. Those who mastered that, mastered life. You had to be your own parents, your own nurturer, your own best friend.

Who could argue with that?

Then one day I was sitting at my desk at work during a totally typical weekday, feeling regretful about a particularly immature, semi-destructive thing I’d recently done, when this feeling started coming over me that in about four seconds had my undivided attention.

“What the hell?” I thought. The next thing I knew, I was very nearly desperate to be alone somewhere. It felt like warm water was filling me up inside — but downward, starting at just beneath my scalp. Right about when the “water” had moved from my neck to my chest, I knew that whatever was happening to me wasn’t going to stop.

And I could tell it was something spiritual, or psychological — or something basically non-physical.

“I’ll be right back,” I said to a co-worker — and then cut out for an auxiliary supply closet in our office no one ever used. I flipped on its light, closed its door behind me, and waited.

I closed my eyes. The intensity of what was happening made that seem like a good idea.

And what happened, rather all at once, was that I saw what a complete asshole I was. Isn’t that awful? All at once, the truth was before me that instead of being a good guy who’s basically always trying to do the right thing, I was a selfish, emotional weakling who was always doing and saying whatever best served my own needs at the time.

I never lied; but I’d fudge the truth here and there if it didn’t really hurt anybody and would help things roll my way.

I never cheated; but life is complex, and sometimes one has to make deals that more directly serve a Larger Good.

I wanted to help others; but there were so many good shows on TV, especially after a long, rough day at work.

What suddenly became a fact to me was that I’d been fooling myself for so long I’d forgotten the act. I wasn’t the great, honorable person I started out to be, that I’d meant to become — that I actually thought I was. I was just another guy so busy thinking he’s constructing the perfect home that he doesn’t realize how long ago he stopped using a level.

Man, I hate it when that happens.

I hate it when in one second I go from being Batman to being the Penguin.

Actually, though, that wasn’t the worst part. By far.

The worst part was that, accompanying that Less Than Peachy view of myself, was the very real knowledge that I was never, ever, ever going to change.

I was born as I was. I had spent my life as I was. And I would die as I’d always been: small, selfish, and mean as a pissed-off penguin.

And there was absolutely nothing I could do about it.

I’d already spent my whole life trying to. Miserable mediocrity was the best I could do. I could achieve that only when I’d somehow pulled it together enough not to be a completely craven animal.

On a good day I was the Penguin!

And then here’s what happened: I saw my death. I mean, I didn’t see myself writhing around after I’d been hit by a truck on the freeway or anything — I didn’t see how I would die. But I did see, in a sort of direct, open tunnel, the disturbingly short distance between where I was, and where I was most certainly going. I saw my mortality. I saw the simple fact that I would die — and that, as surely as one day follows the next, at the moment of my death I wouldn’t be any different than I’d been at any other moment of my life.

Oh, but that was a bad, bad moment for me.

And then my legs disappeared from underneath me. I actually fell on my knees.

In the supply closet.

Looking at my miserable, weak future, straight to my miserable, means-nothing death. It was just me and the cold, hard, gray, flat fact of … me. Which was never going to change. I just did not have the will or means or character to change who I was, which was exactly who I’d always been.

I saw that my life, in any way that could possibly matter, was over.

Then I did something I never, ever do. I started to cry.

Because isn’t the whole point of being alive to be someone you’d really want to be?

So I’m kneeling there, blinded by my sad, stupid little fate, when, from up and off to my left, I hear a disembodied voice say something.

And it says what it says in a clear, distinct cartoon voice.

Listen: I grew up glued to cartoons. As a kid, I had absolutely no idea what was happening with adults, who were clearly insane. But Daffy Duck, I got. Porky Pig was my kind of guy. Wiley Coyote? Please—my very alter-ego!

To this day, I practically shiver with joy when The Simpsons are on.

Anyway, of course I can’t exactly describe the cartoon voice I heard. But, you know: goofy, precise, rich, psuedo-edgy. Cartoonish.

And what that voice said, from up and off to my left somewhere — from offstage, as it were — was, “Isn’t this what Jesus is for?”

And do you know what I knew at that moment — what instantly imprinted itself upon me? That the story of Jesus is historically true. That it happened. That God, desiring above all else to show the people he’d created that he loved them, became a human, and came to earth, and sacrificed himself, and in every way did every thing he possibly could to show people exactly how deeply and terribly he loves them.

That’s what my conversion consisted of: a sudden, sure knowledge that the historical story of Christ is true.

It wasn’t, like, wisdom at all. I wasn’t suddenly filled with the Mind of God, or anything like that. My soul didn’t light up. Angels didn’t sing for me. Nothing like that happened. In a way, it was about as boring as learning the year house paint was invented, or that your bank has slightly altered its Saturday hours. All that had changed was that I was now sure that the story of Christ, about which I had always scoffed if I ever thought of it at all, was true.

Then it was like how, when it starts to rain, you think about the only thing you can think, which is: “Oh. Now everything will get wet.”

That’s about what I thought: “Oh. Now I’m a Christian.”

So I stood, wiped my eyes, opened the door to the supply closet, and went back to work.

(This is taken from my book, Penguins, Pain and the Whole Shebang.)

April 26, 2010 The Restoration of John Shore
Recent Comments
127 Comments | Leave a Comment
"Y'all are nuts and I'm a Christian! Call evil out and yall are evil. Monte ..."
Lesa Jackson How I Blog (and Why I’m ..."
"abusers are master manipulators."
Brandon Roberts That lovable man who abuses you
"Triggered? No. Confused?... Yes. At the amount of assumptions you seem to be making stemming ..."
Isaac A Christianity to make Satan proud
"Can I elaborate? Absolutely. I could write books and books on the subject. However, I ..."
Liora Hess A Christianity to make Satan proud
Browse Our Archives
get the latest from
John Shore
Sign up for our newsletter
POPULAR AT PATHEOS Progressive Christian
1

Who Was the Historical John the Baptist? Freedman...
On March 22nd I will be a panelist that will discuss this...
view all Progressive Christian blogs
What Are Your Thoughts?leave a comment
Copyright 2008-2020, Patheos. All rights reserved.