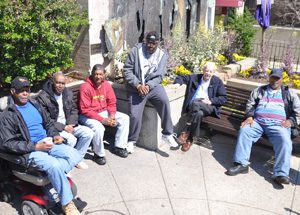 At 4:15am this morning, Church of the Savior co-founder and life-long servant leader Gordon Cosby died in Washington, D.C. He was 95 years old. Just over a year ago, I had the chance to visit with Gordon at Christ House, a hospice he helped to found for the homeless. I’m glad to share this account of our time together as we celebrate his life today.

On Columbia Road in DC’s Adam’s Morgan neighborhood, a couple of homeless men sit on park benches in front of a building marked “Christ House.” They are at home here outside a four-storey building named for the Christ who said the birds of the air had nests, but he didn’t have a place to lay his head. When the homeless in DC get cancer or break a bone, they know they have a home here.

Christ House is a ministry of Church of the Savior, a church that started in this neighborhood in the 1940’s. Committed to radical discipleship and social engagement—the “inward journey and the outward journey”—Church of the Savior became well known for holistic mission while most American Christians were still divided between a commitment to the “social gospel” and an emphasis on personal salvation.

By any assessment, the Church of the Savior’s ministry over the past sixty years has had an influence disproportionate to the relatively small size of its membership. In 2008 alone, 800 people found jobs and 325 new housing units were built through its work in Washington, D.C. The founder of Fellowship of Christian Athletes (FCA) and a moderator of the Reformed Church in America have been raised up from among this flock. Progressive evangelical leader Jim Wallis wrote in 1997 that Church of the Savior “has had more influence around the country than any other church I know about.” Like the trees in the book of Revelation that bear fruit in every season, this community of faith has grown into the abundance of divine fertility.

On a bright and cold winter afternoon, I press the buzzer outside the door at Christ House and one of the residents invites me in. On the fourth floor of this residential hospice for the homeless, Church of the Savior’s founder, Gordon Cosby, shares a room with his wife, Mary. At ninety-four, he leans on a walker to cross the hall to a small chapel. “I’ve got an hour and a half,” he says. “How much time do you have?” 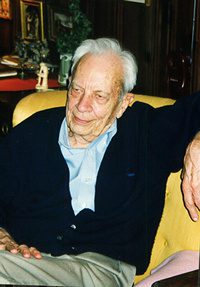 I feel like a pilgrim in the ancient Egyptian desert, come to the cell of a living saint to ask for a word. I’ve come with other members of the Rutba House community, and we all introduce ourselves. “What is your community doing?” the abba asks, and I try to explain in a sentence or two. “Is Jesus Christ at the center of your project?” he asks. A simple “yes” is enough. He nods his affirmation. We share a foundation from which to begin.

“What’s important,” Cosby says, “is to know what you don’t know.” He talks about being old and having to meet new doctors all the time. “I have to make sure they know what they don’t know,” he says with a sparkle in his eye. Then he tells a story.

“Several years ago, I was trying to figure out what the next step was for us here at Church of the Savior. Mary and I went on retreat to the Iona community in Scotland, and we had a wonderful time. I was so impressed by our visit that I came home and started reading a book by one of their leaders. I said to myself, ‘This is the book that’s going to tell me what our next step should be.’ When I got half-way through the book, I knew I had the right one. I couldn’t wait to get to the end and have the answer. But when I got to the last page, I still wasn’t sure just what to do. There was an asterix there after the last sentence. I looked to the bottom of the page, and it said, ‘To see more of what this looks like in practice, visit the Church of the Savior in Washington, DC.’”

He laughs out loud at a story he’s no doubt told a thousand times. He’s glad to see us laughing, too. But then he stops, dead serious, and stares us down. “God’s not going to tell someone else what he wants you to do next. Make sure you’re listening for yourselves.”

For his own part, Cosby says that he’s been thinking about Bartimaeus, whom Jesus healed from blindness. “I keep seeing how blind I’ve been,” he says. “I’m asking the Lord to heal my blindness. Here at 94, I want to be healed. I want to see.”

“If you were thirty years younger,” one of our members asks, “what would you do now?” He laughs. “I’d have to be fifty years younger to be where you are,” he says to his middle-aged African-American interlocutor.

Then, once again, he’s dead serious: “I’d pray for the rich. And I’d try to get to know them. I haven’t done enough to tell them the truth. And I haven’t prayed for them.”

Cosby doesn’t know much about this man, but he sees him—sees the story that’s written in his skin, his voice, his eyes. Cosby isn’t only talking about himself. He’s speaking to this one who was asking for his own sake. “You go back to Durham and try to find out who the richest ten people in town are. Start praying for them. Try to get to know a couple of them. Tell them your story. Tell them what Durham looks like to you. Be honest with them. And tell them you need their help.”

The abbas of ancient Egypt didn’t write books, and Cosby has never written one either. But the people who went out in the desert to hear a word all those years ago came back telling everyone who’d listen what they couldn’t forget. And so we have the collections of their wisdom in sayings. And so we pass them on.

Progressive Christian
From D.C.'s Christ House, A Word and a...
Jonathan Wilson-Hartgrove