A few weeks ago, I got to worship at First Baptist Church in Montgomery, Alabama alongside John Lewis, one of the most courageous nonviolent freedom fighters of the 1960s. I thought about how we were standing in the place where nonviolence came to America in 1955. We talked to the grandson of the woman who played the organ at all those mass meetings that sustained the Bus Boycott through 1956. I studied the faces of the choir members, wondering what their parents and grandparents had told them about those days of struggle. Martin Luther King, Jr. became the face of the Montgomery Bus Boycott for America, but these were the descendants of people who’s sacrifices made it happen. Being there felt like standing with Moses at the burning bush. I wanted to take off my shoes. This was holy ground.

This past fall, John Lewis was in Durham to give the Martin Luther King Award to Rev. Dr. William J. Barber II, the architect of “Moral Mondays” here in North Carolina. Like King, Rev. Barber became the face of Moral Mondays, the largest direct action nonviolence campaign since the sit-ins of the 1960s. But Rev. Barber is insistent that “we” is the most important word in the justice vocabulary. The Movement is getting born again in North Carolina because of faith-rooted people who are willing to sacrifice for human freedom.

For nearly a decade now, since Rev. Barber became president of North Carolina’s NAACP, Greenleaf Christian Church in Goldsboro, North Carolina has been the spiritual anchor for a Movement that may well one day be as well known as the Montgomery Improvement Association. Rosa Parks joined Montgomery’s NAACP in 1943–12 years before she refused to give up her seat on a bus.

I’m going down to Goldsboro to preach the Palm Sunday service at Greenleaf this coming Sunday, March 29, and I wanted to invite you to join me. The service starts at 10:00am and is located at Greenleaf Christian Church at 2110 N William Street, Goldsboro, NC 27531. I’ll do my best to proclaim the word of the Lord next Sunday, but I’m not inviting you to Greenleaf to hear my sermon. I’m inviting you because I have a fresh memory of what it feels like to stand on holy ground, and I’d love to have a chance to stand there with you.

March 16, 2015
A White Southerner in the Freedom Movement
Next Post

Don't give yourself away
slacktivist
Related posts from Jonathan Wilson-Hartgrove

Progressive Christian
If Past Is Prologue, Pay Attention to the...
Jonathan Wilson-Hartgrove 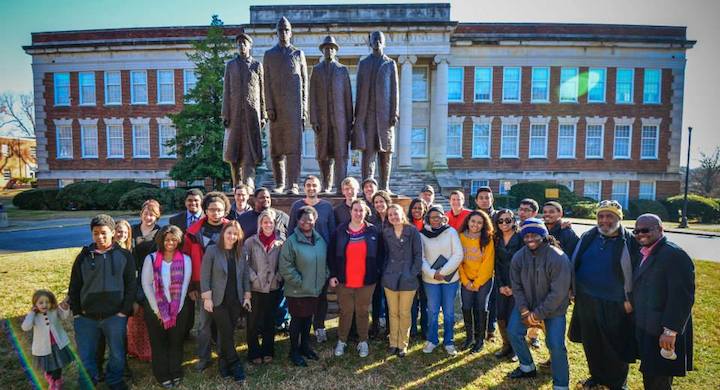