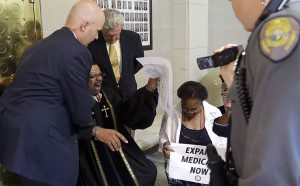 Two years ago this week, seventeen people were arrested on the first “Moral Monday,” sparking a summer of protests in which tens of thousands came to register their objection to immoral policies backed by dark money and extremist legislators. More than 1,000 people were arrested in the largest civil disobedience campaign since the 1960s sit-in movement.

Yesterday, 20 moral witnesses returned to the NC Legislature with hundreds of supporters. They were arrested while reading aloud the Constitution that elected officials swore to uphold.

Official statements from the Legislature’s leadership dismissed yesterday’s protest, suggesting that our movement has a “radical” agenda which North Carolina cannot afford. Sadly, investigative reporters have not yet exposed their lie. But we are not naïve about the strategy of those who would normalize extremism. While they appear calm in public, their actions betray a deep fear of our power.

When “Moral Mondays” started in 2013, our movement had already been working for seven years in our home state. In 2006, we formed a fusion coalition to challenge Democratic leadership in Raleigh to pursue a moral agenda. We won a crucial expansion of voting rights during the 2007 legislative session, which led to the most diverse electorate in North Carolina’s history in 2008. This demonstration of political power got the attention of those who are still fighting us now.

Investing an unprecedented amount of dark money into state legislature races, a small group of ultraconservatives led by Art Pope bought the 2010 midterm elections. It was a strategic $30 million investment. They immediately used their power to gerrymander North Carolina’s voting districts, intentionally diluting the political power of the very people who had so frightened them in 2008. (The US Supreme Court recently ruled that the NC Supreme Court must review these redistricting plans again.)

Having stacked the deck in their favor first through dark money then again through redistricting, Pope’s forces won power over both the Legislature and the Governor’s office in 2012. Pope was himself appointed State Budget Director and the legislators he had funded immediately approved a plan to impoverish the state through a flat tax that slashed rates for the wealthy while denying the Earned Income Tax Credit (EITC) to the working poor.

And they called themselves “conservatives.”

With wanton disregard for the caution that has traditionally marked conservatism, these extremists moved to re-make North Carolina’s government in 2013. Law after law passed with little debate, conforming our legal and statutory code to their radical vision. Meanwhile, they refused to extend unemployment insurance to 700,000 North Carolinians. Of course, these people had all paid into the federal insurance program. But legislators who claim not to believe in “big government” used government power to intervene, preventing unemployed people from receiving their benefits. Many of the victims of their overreach were registered Republicans. We know because they came to join our Moral Movement in outrage.

At the same time, the extremists in our Legislature denied half a million North Carolinians health insurance by refusing to expand Medicaid. Again, they claimed that the state could not afford this expansion. But federal dollars had already been allocated for precisely this purpose. In July of 2014, when the critical access hospital in Belhaven, North Carolina, closed its doors, it became clear that the half million uninsured North Carolinians were not the only victims of this political interposition; the mainly Republican residents of rural North Carolina whose hospitals cannot operate without the federal funds allocated for them in the Affordable Care Act were also losers. Belhaven’s Republican Mayor Adam O’Neal called Raleigh to ask his fellow Republicans for help to save their hospital, but he found none. We know this because he turned to the Moral Movement for help, challenging us to help him save the 283 hospitals in America that are scheduled for closure this year in states that have refused to expand Medicaid.

While we have not engaged in civil disobedience since last summer, our Movement never stopped working to educate people about what is really happening in North Carolina. We have held over 200 events in local communities where the people who voted for extremists legislators had no idea how their actions in Raleigh were selling out the hard working people in their home communities. In February of this year, 50,000 people marched in Raleigh to show their support for this Moral Movement. We said we would give the Legislature until April to expand Medicaid or we would return to civil disobedience. In March of this year, our People’s Grand Jury issued a detailed indictment, documenting the ways North Carolina has been harmed by this refusal to expand Medicaid.

Our moral witnesses who chose to exercise their right to instruct their legislators yesterday evening were not acting alone. They joined a great cloud of witnesses who are determined to turn North Carolina and America from a path of destruction toward a better future. If those in power call this “radical,” we can only hope their hubris will help us all see more clearly how our common life is rooted in shared moral values which are currently being ignored.

March 27, 2015
A Palm Sunday Invitation to Holy Ground
Next Post