Fifty years ago this summer, as the Civil Rights Bill was signed by President Johnson and hundreds of students worked to organize voters through Freedom Summer in Mississippi, Bob Zellner worked as a field secretary for the Student Nonviolent Coordinating Committee. Criss-crossing the South, going to jail, surviving beatings, and standing down George Wallace, Bob learned how freedom is a constant struggle. Five decades later, he’s still at it, teaching a new generation to trust the gospel of sister and brotherhood and organize a fusionist movement for justice.

Learn more about Bob’s work as Freedom Teacher with School for Conversion.

This week, Bob spoke in Wilmington, NC, at a freedom banquet sponsored by the Lyndon Bain Johnson Foundation, where Bob’s colleagues C.T. Vivian and Alice Walker were honored for their life-long service to civil and human rights. His invitation is clear: pay attention to what’s happening in North Carolina. It is a Moral Movement for the Nation. 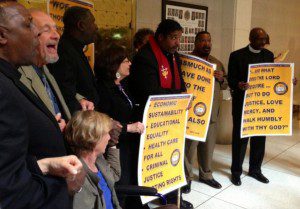 This summer marks the 50th anniversary of the passage of the Public Accommodations Civil Rights law in 1964. President Johnson, through his Great Society, actually reduced poverty in this country, aiding mightily in building a black middle class. Government in those days worked. LBJ in the White House and Mayor for Life, Marion Barry of SNCC in Washington, D.C. collaborated to empower the least of these, which proves that sinners, warts and all, often do the Lord’s work.

Today, sadly, we are faced with the spectacle of a radically activist Supreme Court bent on dismantling this legacy. Fifty years ago conservatives and racist railed against an “activist” court for outlawing segregation. Today that same sliver of the electorate delights in every overreach the extreme right wing can imagine.

A huge uprising of ordinary citizens is occurring right here in N.C. as a result of the ultra right take over of all levers of government.  On February 8th this year the largest civil rights-labor demonstration in the history of the South shook our tone-deaf racist politicians. Between 80 and 100,000 Southerners, 60% of them white, marched on the legislature in Raleigh. To date, over 1000 protestors have been arrested for nonviolent civil disobedience. I was honored to go to jail with the first 17 arrested April 27, 2013. I was my 18th civil rights arrest. Like the four freshmen who fired up the movement in Greensboro on February 1, 1960, we did not know if anyone would follow.

North Carolina has a long and honorable history of struggle bringing poor and white working class Southerners and people of color together in Fusion politics. The establishment and the mainstream press is so afraid of this grassroots organizing that only one national newspaper carried an article on the largest protest in southern civil rights history – USA Today.

The Washington Post and the New York Times ignored this history-making story.  Rev. Dr. William Barber was kept off the stage at both the National NAACP convention in Orlando and the 50th Celebration of the “I Have a Dream,” 1963 March on Washington. It seems that the civil rights establishment is afraid to hold up NC and Moral Mondays and the leadership of Rev. Barber. Crisis Magazine has not covered the Moral Monday Forward Together Movement and the almost 200 organization coalition which has been doing this grassroots organizing for nine years. Is it possible that the established political and civil rights leadership is afraid to give Dr. Barber a national forum because he would become over night the human rights leader of the nation? He is, after all, the best example of what Dr. King recommended – “go back to Georgia, go back to Alabama, go back to Mississippi and North Carolina… and ORGANIZE!”

I visited President Johnson at the White House with Rita Schwerner during the murderous summer of 1964, fifty years ago. I went to jail with Martin Luther King and was recruited to the movement by Ms. Rosa Parks.  They all taught me that sisterhood and brotherhood is not so wild a dream as those who profit by postponing it pretend. 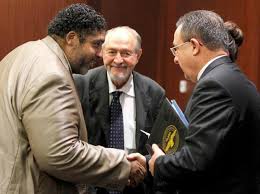 Progressive Christian
A Conspiracy of Silence? Listen to Our Grassroots...
Jonathan Wilson-Hartgrove 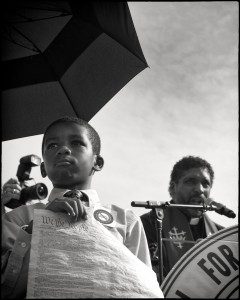 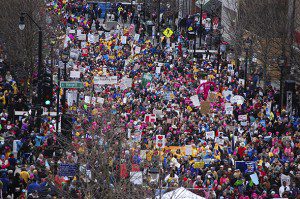