10 Questions for the US Supreme Court 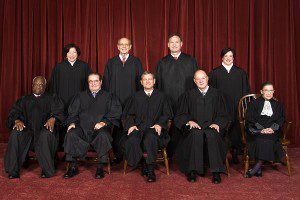 2) Given that a corporation’s by-laws do not outline its religious commitment, how is a court to know when a request for accommodation is based on true conviction?

3) A conscientious objector must substantiate her claim with documentation of conviction at a time prior to the occasion when said conviction would seem convenient. Must corporations go through such a rigorous testing of their convictions?

4) If corporations qua persons are to hold religious beliefs, will they like all other religious people assemble?

5) If no such assembly is recorded prior to the Hobby Lobby decision, does this new body of corporate believers constitute a new religion?

6) If the United Church of Corporations is in fact a new religious movement, can the Supreme Court be said to have “established” it?

7) Establishment clause aside, let us say corporations are allowed to choose from the salad bar of religions available in America. Can Ku Klux Klan Christian corporations refuse to hire African-Americans?

8) If such a question seems extreme, how does the Court name the boundaries of what religious conviction dictates?

9) If religion only trumps reproductive rights, has the Court not again established a particular form of patriarchal Christianity?

10) What does it say about Christianity in America that this is the most creative challenge followers of Jesus are able to bring before the Court at such a time as this?

June 14, 2014
Struggle for Racial Justice is Local
Next Post