Give Us New Eyes

It’s been said that our politics are often shaped by what we see out the window.

I grew up in a small town in Tennessee, which was still very segregated. We knew our police officers by name. On more than one occasion, the police saved the day and countless news stories celebrated the heroism and courage of police officers.

My mom and I used to go on walks together in a park, and I always looked forward to bumping into the officer who patrolled the park. She was tough as nails, but she always greeted me with an enthusiastic smile and a big bear hug. At the age of ten, she appointed me a “Junior Officer” and gave me a real metal badge. I felt like I was on my way to being officer of the year.

Then my window changed.

I moved to Philadelphia in 1993 and quickly began to see the world through a new lens. My experiences with police have not been entirely negative, but each negative experience shattered my world and felt like a betrayal of trust.

I’ve seen a homeless man told that he is a “piece of sh*t” by an officer in uniform. I’ve seen 12-year-old girls taken into custody because they had dark skin and the wrong color t-shirt. We’ve had our house raided by mistake in a sting operation gone awry with officers throwing people to the ground and ripping one woman’s shirt nearly off. We are in the middle of a case right now where officers were responsible for breaking a young child’s leg. And in one of the most tragic instances, we saw a mentally-ill homeless man shot to death as he hid behind a metal chair.

Those are the bad stories. And they are real. Having somewhat double vision now, I understand why 70% of white folks trust the police and about 70% of black folks don’t. We’ve seen different things out our windows.

I am convinced that recent events in Ferguson have become a mirror to the nation. This may very well be a critical moment in history, if we take a time to stop and listen to each other.

I remember a few years ago a church in the neighborhood organized a conversation between the children and some local officers. The kids were asked enthusiastically, “What are some of the things the police do for us?”

Instinctively, the kids responded innocently, honestly. “They take my daddy. “They beat people up.” “They shoot the bad guys.” Their answers were revealing… and disturbing. They were simply saying what they have seen. It was obvious to everyone in the room that we have a problem. Since then, I have even met kids who have been so traumatized by police that they cry and shiver with fear when they see an officer in uniform.

I think we have an opportunity coming out of recent events in Ferguson to listen, to ask new questions, to rethink how we do policing in this country. We may need new policies and training for officers. We may need to exorcise the demons of resentment and hold some truth and reconciliation town meetings. There is much work ahead. But I am hopeful.

One of my favorite memories involving police in Philadelphia was when one of the officers started playing wiffle ball with the kids—only, instead of the bat, they used his billy club. It was cops vs. kids in billy-club-baseball. I’m not sure who scored the most points, but I know this: everybody won that day.

Let’s make some new commitments in light of Ferguson. Let’s commit to listen to each other as we share what we’ve seen out our window. And let’s dedicate ourselves to decreasing violence rather than escalating it.

Let’s dream together of a world where billy clubs are only used for baseball.

August 25, 2014
Don't Let Anyone Look Down on Your Youth: #MoralWeekofAction Day 4
Next Post 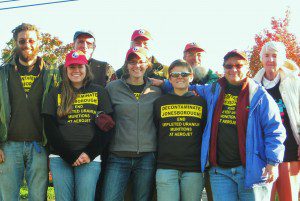