What do Jordan Peterson’s and Harvard’s Views of Truth Have to do with One Another?

What do Jordan Peterson’s and Harvard’s Views of Truth Have to do with One Another? February 28, 2018 nathanrinne

The key similarity is this:

Both are confident that their understanding of what is both significant and true will, in the long run, be justified. This, interestingly, is related to their persons – to the fact that they understand themselves as striving to be as true as one can be.[i]

The idea is this: In the long term, things will work out well, meaning increased benefits and flourishing for many, and therefore, they will be shown to be true.

What is happening here? In sum, truth’s connection with classical ideas of knowledge – that is justified true belief – has been severed. We now have a new kind of knowledge: conceivable useful trust.

First, here is a short account of Harvard’s history with the word truth:

The story of the Harvard arms is writ deep in the past. Veritas, which is Latin for “truth,” was adopted as Harvard’s motto in 1643, but did not see the light of day for almost two centuries. Instead, in 1650, the Harvard Corporation chose In Christi Gloriam, a Latin phrase meaning “For the glory of Christ.”

Veritas eventually was discovered in old college records by Harvard President Josiah Quincy III, and re-emerged in 1836 when it appeared on a banner celebrating the College’s 200th anniversary. The word briefly lived on in the Harvard seal from 1843 to 1847, when it was booted off in favor of Christo et Ecclesiae, or “For Christ in the Church.”

In time, Veritas would become the one word most closely associated with Harvard. But it took an 1880 poem by writer and Professor of Medicine Oliver Wendell Holmes to revive it for good. The poem urged Harvard to “let thine earliest symbol be thy last.” If ubiquity is any measure, Holmes’ poetic wish came true. Veritas was Harvard’s oldest idea for a motto and, after centuries of neglect, is here to stay. (from here: https://news.harvard.edu/gazette/story/2015/05/seal-of-approval/)

All this is very interesting when taking into account recent actions that have occurred at Harvard, which you can listen to Albert Mohler discuss here under his heading “Ideological cleansing on campus: Harvard forces Christian ministry to choose between Christian convictions and continued ministry on campus”.

From the Harvard Crimson:

Harvard College Faith and Action will need to sever ties with parent group Christian Union in order to re-earn recognition from the College at the end of its year-long administrative probation, according to College spokesperson Rachael Dane….

[HCFA’s co-presidents] deny that [it] ever fell out of compliance with the College’s nondiscrimination standards.

The two wrote in a previous statement that they “reject any notion that we discriminate on the basis of sexual orientation.” Ely and Richmond attributed the Sept. 2017 dismissal of the student to an “irreconcilable theological disagreement.”

Asked to elaborate, Ely and Richmond specifically pointed to HCFA’s stance on extramarital sex. The co-presidents asserted the group believes those in leadership positions must remain celibate, adding HCFA applies this policy “regardless of sexual orientation.”

But the woman who was asked to step down wrote in an email to The Crimson Friday that she and her girlfriend had never engaged in “extramarital sex.” The woman spoke only on the condition of anonymity.

“We’ve been fairly open in our conversations within HCFA about our decision to not have sex until marriage since the beginning of our relationship,” the woman wrote in the email.

From here, one sees that Harvard University – and many of its student population for that matter – do not believe that the Bible’s identifying homosexual activity as sinful is right or true — at least for today or tomorrow. The Right Side of History, you know.[ii]

In order to examine Jordan Peterson’s view of truth, I am going to quote from an email I recently received from a very knowledgeable colleague in my field, library science:

Recently, I discovered the thinking of Jordan Peterson, an academic from Canada, and I haven’t yet reached a final opinion, although he is interesting and all over the web. He did a podcast with Sam Harris, a scientist and it set me thinking.

Peterson is a Christian but of no particular denomination that I am aware of, while Harris is an atheist. Their discussion was interesting because they got stuck on the notion of truth…. From my understanding of their point of disagreement, Peterson believes in the primacy of the moral consequences of any thing or event. Therefore, while something may be objectively (or scientifically) true, if accepting that truth leads to evil consequences, then what we perceive as true cannot be ultimately true.

Therefore, if scientific truth is at odds with moral truth, then the moral truth should prevail. The example was the nuclear bomb. Here is a quote from Peterson: “…I would say that the proposition that the universe is best conceptualized as sub-atomic particles was true enough to generate a hydrogen bomb, but it wasn’t true enough to stop everyone from dying.  And, therefore, from a Darwinian perspective, it was an insufficient pragmatic proposition and was therefore in some fundamental sense, wrong.  And, perhaps it was wrong because of what it left out.  You know, maybe it is wrong, in the Darwinian sense, to reduce the complexity of being to a material substrate and forget about the surrounding context.”

This makes sense for Peterson, who is a Christian and believes in an all-powerful God who is good and loves us.

To Harris, who is a scientist and atheist, such a way of thinking was incomprehensible. A truth/fact is a fact no matter where it leads you, but for Peterson, if it leads to bad moral consequences, that same truth/fact cannot be true.

….This is the link to the podcast, if you are interested but there are lots of discussions about this podcast on the web. https://samharris.org/podcasts/what-is-true/

For now, let us leave aside the question of whether or not Peterson claims to be a Christian.[iii] As for his interesting view of truth, in some ways it does mirror the Christian message, because a part of that message is that God is faithful and true – He will “set the world to rights” in the end.

That said, all of this is missing something very important, and something that even many secular persons (like Sam Harris and the man who sent this to me) want to hold on to.

Namely this: We can and should say that some things are true (and not just conceivable, useful, and worthy of trusting in). We can make statements that are true, period. Even statements that stand trans-historically and trans-culturally.

That is what things like the Nicene Creed are all about.

The world’s a chaotic sea and the faith is our Ultimate Rock.

Now, I can sense the objections coming: all of this might make some — particularly those in the academic world — think that Christians cannot speak intelligently about change.

On the contrary, I would humbly suggest that Christians are the ones who can most sensibly talk about the reality of change. If you don’t believe me, listen to this excellent presentation on “The Provisional Nature of Truth” from Pastor James Wetzstein from Valparaiso University, speaking this past week at the first annual Oswald Hoffman lecture at Concordia University in St. Paul:

After listening to the talk, I again thought about how there are a lot of things you and I can say that are certain and true (some more readily believed by everyone than others, even trans-culturally and trans-historically) — even if the fullness or completeness of that statement and what it entails, means, etc. is not known.

I checked with Pastor Wetzstein and he indicated to me that he thought that was a good point.

I hope you find that I’ve made another good point in this post. Let me know if you disagree.

[i] This is related to my argument here: https://reliablesourcessite.wordpress.com/2017/03/10/sola-commoditas-truth-is-fitness-alone/

[iii] He has certainly been willing to let statements implying that he is stand unchallenged. Note the discussion starting around 48:28 in the following YouTube video (Jan. 31, 2018):  https://www.youtube.com/watch?v=iRPDGEgaATU. On the other hand, not long before that conversation, in Canada’s National Post, the following exchange took place: “Are you a Christian? Do you believe in God?” Peterson responds: “I think the proper response to that is No, but I’m afraid He might exist.” http://nationalpost.com/feature/christie-blatchford-sits-down-with-warrior-for-common-sense-jordan-peterson 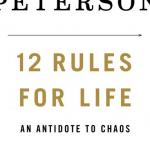 February 28, 2018 Flooding in Our Church
Recent Comments
0 | Leave a Comment
Browse Our Archives
get the latest from
Evangelical
Sign up for our newsletter
POPULAR AT PATHEOS Evangelical
1