I’m reading Martin Luther’s Theology: A Contemporary Interpretation, by Oswald Bayer, a book I read a bit of in seminary, but probably not as much as I was supposed to. I’m finding some good stuff, and I’ll probably post on some of those things on another occasion, but I’m also finding on almost every page the marks of a deep commitment to Existentialist metaphysics—or at least, a thoroughgoing aversion to Essentialist metaphysics, which as far as I can tell is the same thing. It’s like an allergy.

Here’s one example, that allows me to discuss Bayer’s doctrine of Scripture at the same time (or Bayer’s understanding of Luther’s doctrine of Scripture, but again I think these are the same thing). On p. 69, he mentions the old distinction[1] “which regards Holy Scripture as the formal principle of Protestantism and justification as the material principle,” and then rejects it. “The authority of Scripture is not formal but is highly material and is content driven. … Scripture can in no wise be confirmed as having formal authority in advance, so that the content becomes important only as a second stage of the process.” He then goes on to identify such a priori confirmation of Scripture’s formal authority as “Fundamentalism,” that great bugbear of academic theologians (74). The way Scripture’s authority really works, Bayer says, is that you read it (or hear it) and it speaks to you. It tells you about yourself, it convicts you, and it pronounces forgiveness upon you, and through this encounter with the actual material content, Scripture proves its authority to you.

This is the point at which the Essentialist reader (that’s me) must critique the Existentialist author by appealing not to Plato’s Forms, or anything like that, but rather to the actual conditions of Existence, which he seems (ironically) to be overlooking. Who reads the Bible? And why? Many hundreds of millions of people read the Bible, all over the world. And they read it because the Christian Church claims (and the Bible itself claims in places) that it is the Word of God. They do not all believe this claim, of course. But even those who read it to debunk it, or for reasons that are purely academic or cultural, read it because of this huge claim and its huge ramifications—either to see for themselves, or to try to understand the religion and the mentality of those who do believe. Now, without this a priori claim, some people would probably still read it; some books of the Bible would be popular in the way, say, The Gilgamesh Epic is popular, but we’ll never get to test this hypothesis, because you’re never going to find someone who 1) knows enough about the Bible that he conceives a desire to read it, but 2) doesn’t know that it’s supposed to be the Word of God.

The experience Bayer describes of someone reading Scripture and being convinced by Scripture itself of all these things, and hence of Scripture’s divine authority, is very real. Nor does it work only for people who already believe that the Bible is God’s Word; sometimes critics read the Bible in order to debunk it, and end up coming to faith as a result of the experience. But even in those cases, the only reason they were reading it with such seriousness and attention, as something worth debunking in the first place, is that such audacious and demanding claims are made for it. The fundamentalist (or the “fundamentalist”) asserts the authority of Scripture as a formal principle, and the skeptic denies it, but both of them are profoundly influenced by it. They read the text differently, having heard it. They read the text at all.

So the claim that the Bible is God’s Word is in fact a formal principle of the Christian faith. The specifically Protestant claim is that since it is God’s Word, it is the formal principle of the Christian faith. All Christian doctrine is formed by the Bible, and nothing that comes from any other source is authoritative. If Bayer were just pointing out how our actual experience with the text proves the truth of the a priori claim, he would be right on. But he denies that there can be an a priori claim. That’s “fundamentalism.”

What’s going on here? At the end of the section where he uses the “F” word, he characterizes the “formal principle” position as the claim “that there is a formal principle that lies behind the text and is to be extracted by critical reason” (77). This is most perplexing. The actual claim is that the material of the Bible—the very stuff Bayer wants to privilege—must form all Christian theology. It is, as far as I can tell, exactly the same thing Bayer himself is saying, only stated as a principle that should guide exegesis rather than as a testimony of my personal encounter with Scripture. My only guess is that he’s really and truly allergic, as I said at the beginning, to Essentialist metaphysics and the terminology associated therewith. “Formal” is an Essentialist term. Therefore it apparently must refer to a world-and-history-denying “Platonic” insistence on “recovering some timeless principle that could be detected behind the text, whether it was the ‘matter about Jesus,’ the ‘nature of Christianity,’ the ‘canon within a canon,’ etc.” (71). This seems like a major blind spot.

[1] Not terribly old, according to Bayer’s footnote, which says it goes back to 1826 and a theologian named August Twesten. 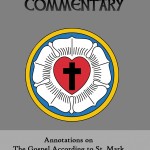 May 27, 2015
Two New Volumes of the Lutheran Commentary
Next Post

May 28, 2015 A Guide to Lutheran Systematic Theology Texts
Recent Comments
0 | Leave a Comment
"God bless Dr. John Pless!"
Darrin Sheek The growing influence of Erlangen theology ..."
"Well said. Thank you. I have only recently learned about the importance of distinguishing between ..."
Semone J. Simmons The Danger of Law-Gospel Reductionism
"only this:a person's life is sacred, but each of us has a moral conscience and ..."
Christiane Smith Gradually Embracing Jack Kevorkian’s World?: Christians ..."
"Roger,True. And here, evidence and logic are important, but there is also the issue of ..."
Nathan Rinne Fighting Critical Theory Approaches in the ..."
Browse Our Archives
Follow Us!