The growing influence of Erlangen theology and Gerhard Forde

What is “Erlangen theology”?  My studies at Lutheran seminaries in England and Canada (1998-2000) occasioned only a passing acquaintance with names such as Elert and Alhaus, conveniently labeled as “Erlangian” for the students. And yet, in spite of the paucity of references to the school in my own seminary experiences, Erlangen evidently still speaks to many in the church body that I am a part of, the Lutheran Church – Missouri Synod (LC-MS). It seems many of our theologians remain intrigued with, and curious about, the work adherents of the school produce.

Many conservative Lutheran theologians clearly remain in dialog with this school, not least through the influence of theologians such as Gerhard Forde, James Nestingen, and Stephen Paulson. It seems safe to say that the Erlangen school is the representative “conservative school” in Germany, and therefore it is not overly surprising that some of the works of Oswald Bayer, the current living iteration of the school, are now a staple at both LC-MS seminaries in the United States.

Of course, despite affinities that confessional Lutheran bodies in America might have with Erlangen theology, there are certainly differences in these theologies.  That said, a cursory look at brief expositions of Erlangen theology also gives evidence that real differences are perhaps a bit difficult to pin down.  Judging from the Lutheran Cyclopedia article though, largely reproduced and expanded on in Wikipedia (under “neo-Lutheranism”) one does get the impression that LC-MS types, for example, are static confessionalists / repristinationists who are opposed to “new learning”.  What does this mean?

Years ago, my own pastor described Erlangen theology in the following fashion:

…the theologian in academia has two challenges: 1) To teach that which he should; 2) To be taken as intellectually viable. Since the enlightenment, the latter has trumped the former. The Erlangen school is appealing, for while rejecting divine inspiration, it accepts Scripture as a type of God’s Word;while rejecting the knowability of history, it accepts the events described within Scripture as a witness of the church to normative events; while rejecting a quia subscription to the confessions, it accepts the confessional nature of the church;while rejecting a standard hermeneutic of biblical interpretation, it accepts the idea that the church should be the one to interpret Scripture…In short, what Erlangen theologians attempt to do is to maintain some sort of Lutheran theology, based on what the modern intellectual community takes to be fact, or reality.

I am not aware of who in the confessional Lutheran world is an authority on these matters – certainly not myself (though as a Lutheran, I have no trouble speaking authoritatively!). Pastor Jordan Cooper however, seems to be fast becoming an authority on the theology of the late Gerhard Forde, who certainly has some affinities with the school.  And his most recent podcast on some of the issues with Forde’s theology shows that he has done a great deal of reading not only of Forde, but Paulson, Bayer, and modern theology in general.  I think all of this makes for a critique of Forde that is really quite insightful and powerful, in addition to being relatively easy to understand as well.

If you have not had a chance to listen to it, yet, I encourage you to do so.

Here is another post I did on Erlangen theologian Oswald Bayer.

June 20, 2014
Joseph Stump on the Mystical Union
Next Post

June 25, 2014 What hath Pope Francis in common with Joel Osteen? United in epistemology?
Recent Comments
0 | Leave a Comment
"God bless Dr. John Pless!"
Darrin Sheek The growing influence of Erlangen theology ..."
"Well said. Thank you. I have only recently learned about the importance of distinguishing between ..."
Semone J. Simmons The Danger of Law-Gospel Reductionism
"only this:a person's life is sacred, but each of us has a moral conscience and ..."
Christiane Smith Gradually Embracing Jack Kevorkian’s World?: Christians ..."
"Roger,True. And here, evidence and logic are important, but there is also the issue of ..."
Nathan Rinne Fighting Critical Theory Approaches in the ..."
Browse Our Archives
get the latest from
Evangelical
Sign up for our newsletter
POPULAR AT PATHEOS Evangelical
1 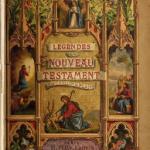 The Problem with Teaching on Zoom
view all Evangelical blogs
What Are Your Thoughts?leave a comment
Copyright 2008-2020, Patheos. All rights reserved.