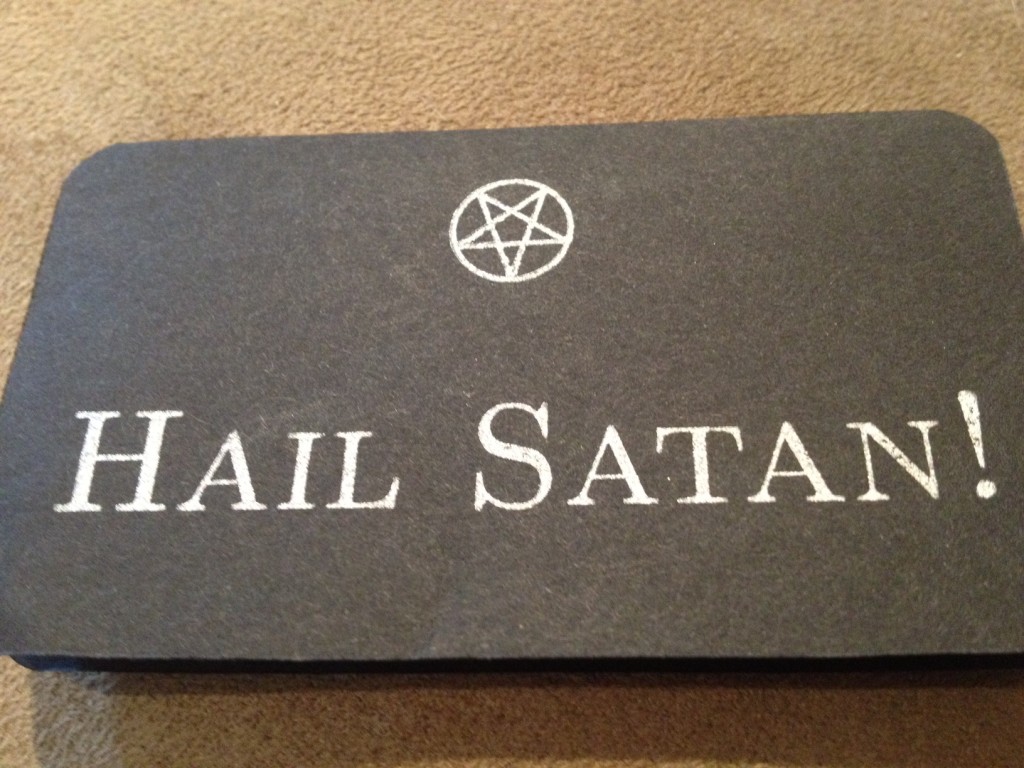 He looked like Woody Allen with longer hair, albeit still balding on top. He wore all black, which seems to be the go-to color for Satanists of any era.  The better to hide in the shadows with, my dear.

He was handing out business cards at the bookstore in Olympia on Saturday.

I sent Tim to the car to retrieve mine this morning.

“Honey, there’s a black business card on the passenger seat could you run go get it for me? I’m not dressed yet.”

Tim comes back holding the card at the full extension of his arm, like he used to do the really smelly diapers: “What is this? Hail Satan? I shouldn’t even be touching this.”

“I met him at the bookstore in Olympia,” I replied, laughing.

Tim flipped the card over. “Satanic Missionary Society?” he asked.

“Yeah. He’s a missionary for Satan.”

That’s what he told me when he approached me at my author’s table. “I’m a missionary for Satan. We are holding a Satanic Prayer vigil on the Capital steps on Wednesday to protest the Westboro Baptist Church.”

(That’s like the pot calling the kettle black, right?)

“Westboro is coming to Olympia?” I asked Mr. Satanist. “How come?”

“They are protesting our gay marriage law, I think.”

“Ahh. And what exactly is a Satan Missionary?”

“We proselytize for Satan,” he replied.

“The way some people do for Jesus?” I asked.

“No,” he said. “A lot of times people do what they do out of obligation. We are trying to free them from that guilt.”

“Do you ever read the newspaper? Listen to the news?”

He handed me the black card. The one with the web address on the back.  I didn’t know Satanists had any virtues but as it turns out they had a list of their virtues posted at their website:

To be selfish is to ask “What’s in it for me?” Satan rejects sacrifice and martyrdom. The greater good cannot be built on self-inflicted misery. Selfless sacrifice puts us all under the pressing shadow of death. We reject sacrifice and promote selfish indulgence.

To be lazy is to refuse to do what isn’t working, to stop, to do nothing until we have a better idea, to try something else. When we feel like doing something, we will. If we work too hard, we won’t stop to notice an easier way. We reject fruitless hard work.

Insolence means not accepting things on authority, refusing to be humble and degraded, refusing to grovel and show respect to superiors. To be insolent is to insist on dignity and freedom.

To be lustful is to embrace all the pleasures we can while we live, to follow our desires and passions wherever they lead us, to run to the devil that tempts us, to ask for more.

To be vain is to love and admire ourselves, to relish our own brilliance and magic, to see in ourselves what is beautiful and attractive, to build and nurture it. To be vain is to accept the forbidden fruit from the serpent in the garden. To be vain is to want to know more, to proudly leave the narcotic fog of delusion behind us.

Of course,  it’s not as though I hadn’t been warned:

Don’t be naive. There are difficult times ahead. As the end approaches, people are going to be self-absorbed, money-hungry, self-promoting, stuck-up, profane, contemptuous of parents, crude, coarse, dog-eat-dog, unbending, slanderers, impulsively wild, savage, cynical, treacherous, ruthless, bloated windbags, addicted to lust, and allergic to God. They’ll make a show of religion, but behind the scenes they’re animals. Stay clear of these people. 2 Timothy 3:2

“You really don’t think that the problem is that too many people are too selfish already?” I pressed.

“Well, I’m not really a Satanist,” he said. “I’m an atheist. I’m just doing this as part of a theatrical thing I do.”

“Oh. I see. You’re sort of a Satanist hypocrite, then, right?”

June 6, 2012 You're not the boss of me
Recent Comments
3 Comments | Leave a Comment
Browse Our Archives
Follow Us!