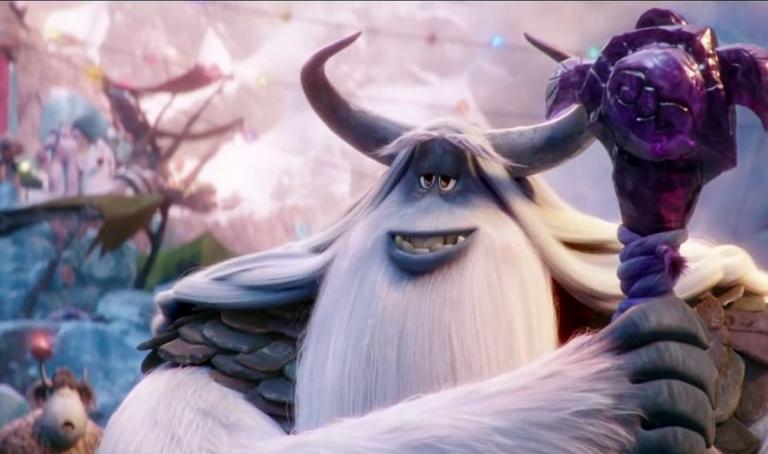 Smallfoot at minute five, 25, 45 … closing credits — here’s me: arms crossed and stone-faced. In general, I don’t like movies that preach, and there’s plenty of preaching going on here.

The animated feature, coming out on Friday, Sept. 28, is about a civilization of yetis living, they believe, on a mountain floating in the clouds, and in which “smallfoots,” a k a human beings, are merely mythology. Or so says a collection of inscribed stones worn as a robe by the yeti leader, which cannot ever be questioned. But then, one yeti accidentally finds a human being. When the leader challenges his story, he discovers an underground society of yeti truth-seekers (sort of like UFO enthusiasts), who seek information about the allegedly mythical “smallfoot.” They embark on an adventure below the clouds to see what’s there. Meanwhile, the human host of a TV wildlife show, shooting in the area, is willing to stage events to boost ratings — which take a huge leap when he encounters the yetis.

Its tagline is “There’s been a big myth-understanding.”

The animated movie from Warner Bros. is well-drawn and produced, features engaging character designs, good voice performances and snappy music. It’s also propaganda from start to finish — and this pains me, because I’m a longtime WB animation fan. The film is both anti-religion and anti-human.

The basic religion idea is that beliefs are lies concocted by leaders to protect their followers from the truth — and those beliefs can never be questioned. Indeed, “Ignorance is bliss” is one of them.

A lot of people think that about Christianity. I’m not here to outline or defend the doctrines of any other branch of that religion or of any other religion — adherents of those would be better-qualified than me to do so — but in the Catholic Church, intellectual curiosity and the asking of questions has been going on since the Church began.

If Sister Whoever or Father Whatshisname told you in 4th grade that you shouldn’t ask questions or refused to answer your questions, that’s a shame. But you aren’t in 4th grade now, and Sister and Father didn’t represent the totality of the teaching Magisterium of the Church. We’ve had published Catechisms for many years now; all Vatican documents are available online or through apps; there’s a multiplicity of websites, books and periodicals that outline and debate every aspect of Church teaching. If you have a question, ask it. You may not agree with the answer, but that’s a separate issue.

The Bible is as well-sourced and defensible as any document of its time, and more so than many. The life of Christ is as equally well-sourced as nearly anything that happened to someone at the time who wasn’t a king or emperor or someone like that, and better-sourced than for many that were. (As for the Resurrection, refer to the atheist journalist’s investigation at the heart of “The Case for Christ.”).

If all of this was merely a pack of lies whipped up to deceive the faithful for their own good, the intense scholarship and scrutiny of just the last century would have been enough to shred it completely. And as the Church played a central role in the creation the first universities in Europe, has been educating girls and boys for centuries, and has also been involved with scientific research for centuries, and still is, that anti-intellectual charge also doesn’t hold water.

So, enough of this, as least as it concerns the Bible and the Catholic Church. Catholic parents, if you take your kids to Smallfoot, they’re going to hear that the Faith is likely just a pile of untruths meant to keep them in darkness and intellectual slavery.

As for the treatment of human beings in Smallfoot, unless the human is utterly devoted to the environment, they’re greedy and stupid and violent. The yetis, of course, are peaceful and wonderful and charming and harmless and innocent, while the guilt of the humans is presupposed. At one point, a yeti observes, “They think we’re monsters, and we think they’re monsters” — but of course, the humans are the only ones who are mistaken.

There are attempts to mollify both the above positions. The leader swoops in to save the day at one point, and “the truth” comes out (which every yeti accepts with nothing but wonder and happiness), but the claim that their whole worldview was an intentional fictional construct stands. The TV host turns around, but he’s only good because he decides to emulate the wonderful, perfect yetis, who would never harm a fly.

(This is the kind of silly thinking that gets naive people trampled or mauled by wild animals, which merely act like real animals, not angelic fantasy creatures.)

Oh, and for what it’s worth, the village below the yeti mountain is awash in neon signs and looks more like an urban Chinatown than any of the pictures of Himalayan villages I saw online. But, if you’ve been to a village in supposed yeti territory that is a mass of garish signage, I stand corrected.

I can’t recommend this movie to Catholic parents. 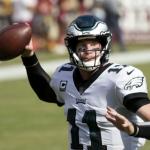 September 25, 2018
'Birds of Pray': New Book Looks at Christian QB Carson Wentz and the Faith of the Philadelphia Eagles
Next Post

October 3, 2018 'Narnia' and Televangelist 'Gemstones': Netflix and HBO Get Religion (More or Less)
Recent Comments
0 | Leave a Comment
"Simply being subject to scrutiny for many Christian sects is "unfair". They're ignoring that THEY ..."
Michel Hulu’s ‘Under the Banner of Heaven’ ..."
"I think some people’s opinion about this movie will reflect their opinions of Mark Wahlberg ..."
Chris ‘Father Stu’: What Makes a Catholic ..."
"I too was not enamored of Bertha's ball gown, it wasn't particularly flattering, and that ..."
KMC HBO’s ‘The Gilded Age’: Oh, the ..."
"chaturbate Chaturbatechatrubatr Chatrubatrchaturbatew chaturbatewchatrubatw chatrubatwchatubate chatubate"
chaturbate ‘The Chosen’s’ Angel Studios Attracts Investment ..."
Browse Our Archives
Related posts from Kate O'Hare's Pax Culturati