‘A Beautiful Day in the Neighborhood’: Why It Took 10 Years (and Tom Hanks) to Get the Mr. Rogers Movie Made

‘A Beautiful Day in the Neighborhood’: Why It Took 10 Years (and Tom Hanks) to Get the Mr. Rogers Movie Made November 20, 2019 Kate O'Hare

Upfront, I have to confess that I missed the window on Mr. Rogers’ Neighborhood. Didn’t watch it as a kid, and as an adult, Mr. Rogers looked to me vaguely like someone who oughtn’t be allowed to hang around playgrounds.

Boy, was I ever wrong about that.

Generations of children grew up with him, imbibing his gentle messages of love and kindness. Rogers, an ordained Presbyterian minister, wasn’t overtly religious on his PBS show, but prayer and faith in a merciful God infused everything he did, along with a preternatural ability to talk to children.

The Oscars may have snubbed the 2018 Focus Features documentary on Rogers, Won’t You Be My Neighbor, directed by Morgan Neville, but audiences embraced it. It was my first real introduction to Fred Rogers. As a middle-aged, white, heterosexual Christian man, he’s the last sort of person Hollywood usually wants to lionize these days — but moviegoers welcomed him with open arms.

Now, on Nov. 22, just in time for Thanksgiving, A Beautiful Day in the Neighborhood hits theaters. Released by Sony Pictures, with the help of its faith-based division, AFFIRM Films (which provides discussion guides and other material here), the scripted film (official site here) looks at Rogers, played to perfection by Tom Hanks, through the eyes of troubled magazine writer Lloyd Vogel (Matthew Rhys).

Married (to Susan Kelechi Watson of This is Us), with a baby, he’s very loosely based on Esquire writer Tom Junod, whose assignment to write a brief puff profile on Rogers led to an unlikely, life-changing friendship — and a very long, salutary 2017 Esquire article, on which the movie is based.

But, Junod didn’t write the movie. That was left to the team of Micah Fitzerman-Blue and Noah Harpster. Their script landed on the Black List — an online resource of unproduced screenplays — in 2013. Now, nearly 10 years after the duo began the project, it hits the screen.

As I mentioned before, this is a movie about not just one, but two, heterosexual white men, one of whom is having a rough patch but is essentially good, and one who is a devout Christian. Nothing is blown up, nobody flies, there are no sex scenes, and the world isn’t saved from a transdimensional menace. In a phone interview, I asked the two writers what they were thinking.

“What were we thinking?” says Harpster. “Well, I think there’s a reason why it took 10 years to get this movie made, because of the exact things that you are pointing out. It’s hard because this is a movie that’s really about feeling and honoring those feelings and having empathy for people and not hiding the face of one of the lead characters.

“Over the years, people were apprehensive about telling the story. Micah and I, along with our producers and the director, really felt like this was a story worth telling. Today, we are in a world where our heroes have fallen, and we have few people to look up to who are good and who are leading from kindness and leading from empathy, without any other intentions except to be present and to be of service to other people.

“Micah and I really respond to that … but also responded to, where have our heroes gone, and who are we to look up to? That is what helped us persist through all these years until … to be honest, until [director] Marielle  [Heller] came on, and she got Tom Hanks on. Then once we had Tom Hanks, everybody wants to make your movie.”

Appropriately both writers have experienced Mr. Rogers through their own children. When the project began, Harpster had a toddler who was mesmerized by Mr. Rogers’ Neighborhood, and during filming, Fitzerman-Blue had a toddler.

Recalls Fitzerman-Blue, “As a writer, when you commit to working on something, like a feature, you know that you’re signing up to be with something for a long time. I just felt so fortunate that this was the water that I was swimming in.

“It is so hard to be a parent. In steeping myself in Fred Rogers and in his kind of lesson, I felt like I was getting some kind of emotional bootcamp for how to be a dad. For my daughter, the thrill of having her dad on a movie set was definitely not FaceTiming with Tom Hanks. It was me bringing my phone in between setups over to the prop’s department where we had a Daniel Tiger puppet.

“My daughter watches Mr. Rogers’ Neighborhood, and it was like meeting the biggest movie star in the entire world for her. It really blew her mind.”

Both writers were aware of the Fred Rogers documentary, which, in a way, primed the pump for their scripted project.

“We loved that documentary,” says Fitzerman-Blue. “We were just so impressed with what Morgan did by, not just introducing people to Fred’s biography, but also to his worldview and his philosophy. Part of that is steeped in his faith. A lot of that is deep in his commitment to early childhood education and best practices. Everything he did, he did with intention.

“But I guess our feeling is, if there can be ten Marvel movies that come out every year, there can definitely be room for two movies about Mr. Rogers.”

Both writers feel that one reason the script stayed alive was because its message resonated with some of the most overworked and mistreated people in the entertainment industry.

Says Harpster, “Part of the reason that this script even got the attention back then is that assistants in agencies and production companies started reading it and started sending it to their friends — assistants who are generally treated pretty poorly and/or are living in worlds of cynicism and sort of general meanness.

Says Fitzerman-Blue (unaware, as even the star was until recently, that Hanks and Rogers are sixth cousins), “We always felt that Tom Hanks and Fred Rogers had some kind of spiritual kinship. They draw from a similar well. They maybe exist in the same parts of our memory, certainly in ours, growing up with both, watching both. That’s what Tom Hanks does for your movie.”

The duo also says that, along the way, nobody at Sony asked them to tone down Rogers’ religiosity.

Says Harpster, “Micah and I took the stance that Fred took in his life, which is that he never proselytized but he always witnessed. So he was in his actions. He was always adhering to his faith and his beliefs, but he was never proselytizing. We felt like the movie should honor that. We never shied away from it, we never tried to ignore it or hide it. It was just what it was as it was with Fred and no one ever questioned that.”

Click here to find tickets and a theater in your area for A Beautiful Day in the Neighborhood. And, no one will judge you if you show up in a red sweater and blue tennis shoes. OK, they still might, but who cares?

And here’s Hanks talking about the movie:

November 15, 2019
'No Safe Spaces': Dennis Prager on Free Speech, False Faith and Preaching to the Choir
Next Post 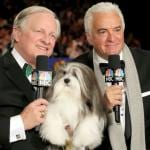 November 25, 2019 'National Dog Show': John O'Hurley Sits at the Doggo Table on Thanksgiving
Recent Comments
0 | Leave a Comment
"I enjoy Raymond Arroyo's segments on The Ingraham Angle on Fox and am happy to ..."
Jennifer Klessens Raymond Arroyo Just Wants to Tell ..."
"In the special, she mentioned that she used to live across the street from O'Connor, ..."
Kate O'Hare PBS’ ‘American Masters’ Examines the Sacramental ..."
"Black author Alice Walker, who grew up in rural Georgia and is an outspoken liberal, ..."
Chris PBS’ ‘American Masters’ Examines the Sacramental ..."
"Since it's already going to Hulu, I wouldn't hold my breath. But it may eventually. ..."
Kate O'Hare ‘Genius: Aretha’: Cynthia Erivo Sizzles as ..."
Browse Our Archives
get the latest from
Kate O'Hare's Pax Culturati
Sign up for our newsletter
POPULAR AT PATHEOS Catholic
1