California is burning. As I write this, 47 wildfires are active across the Golden State, piling onto a place suffering, like the rest of the world, from the woes of the COVID-19 virus and its related economic impact, and reeling from bouts of civil unrest.

Many Californians are fleeing the state’s urban centers, seeking a lower cost of living and a more peaceful life.

But not all of California is San Francisco or Los Angeles. There are quiet small towns, and some of those suffer the worst from the annual bout of wildfires in the summer and fall — most of which are caused by humans.

What Was the Camp Fire?

One such case was the Camp Fire of Nov. 2018. Sparked by aging equipment owned by utility Pacific Gas & Electric, it raged through the Sierra Nevada foothills towns of Paradise and Magalia, and devastated almost every structure, burning 153,000 acres and killing 85 people. Over 90 percent of  Paradise’s population has gone elsewhere, but some are determined to remain and rebuild.

The fire and the rebirth are at the heart of Rebuilding Paradise, a documentary by director Ron Howard. Produced by National Geographic Documentary Films, it’s currently available online for virtual screenings through local theater websites (that’s how I watched), and in-person in select theaters. Click here to learn more.

The documentary opens with several minutes of news and individuals’ footage of the destruction and residents’ terrifying attempts to escape. But that’s only part of the story. In the wake, people struggle to pick up what little pieces of their lives are left and figure out where to live. In some cases, they and all their friends and close relations are also homeless.

On top of this, there’s the wrangling with PG&E about its role in causing the fire, questions about whether the town should even be rebuilt (in a state with entire major cities built on earthquake fault lines, “safe” is a relative term), and the refusal of many residents to give up on their community, even if most of it is a heap of ashes.

Obviously, Ron Howard and his fellow filmmakers had no clue about the worldwide devastation to come in 2020, not from fire but from an invisible enemy that burns just as effectively through lives and economies.

In one scene in Rebuilding Paradise, high-schoolers raise money for a tornado-struck town back East, remarking how distant tragedy suddenly feels very real for them.

We’re probably all feeling a bit of that right now.

Paradise residents also struggle with the emotional aftereffects of loss and disruption. For survivors, perhaps the only day worse than the one a disaster hits is the one where you have to wake up and take stock of what’s left and decide where to go next.

For most, it’s a new and deeply disturbing feeling.

Because of the virus, the biannual TV Critics Association Press Tour had to go virtual this summer, and National Geographic put on a panel including Howard, who remarked:

It’s one thing to survive a crisis like that, and it’s another thing to flourish as a community or as an individual. And I had no idea really what the obstacles would be.

I’ve never been through a circumstance like that. I’ve been fortunate my whole life to have resources at my disposal, when I did have to face a crisis, that made it much easier. But that’s what I was curious about.

And it’s just a demonstration of the kinds of challenges people might face — will face — they will face. Whether it’s a fire, or a storm, or an ugly riot or whatever it might be, and to me, I wanted to shine a light on that. There were, frankly, more obstacles than I expected there would be.

A Catholic Parish Is Left Standing

Although Rebuilding Paradise doesn’t lean into the discussion of Paradise’s faith communities, they were very important during and after the fire.

Among the few left standing is St. Thomas More Catholic Church. Part of the Diocese of Sacramento, its church building and school were spared but not its parishioners. Click here to explore the efforts of the Society of St. Vincent de Paul and surrounding parishes to help.

In June of 2019, St. Thomas More reopened with a Mass celebrated by Bishop Jaime Soto, determined to serve any remaining parishioners, even if they had to drive in from other towns. Today, like many churches, it’s holding outdoor Mass to align with COVID-19 safety protocols.

St. Thomas More is no longer big enough for a full-time priest, but as the Fox affiliate in Sacramento reported:

Sacramento Bishop Jaime Soto could have closed the parish. He could have decided there simply aren’t enough parishioners anymore to justify keeping it open. Instead he recognized, this parish needs to be here for this community.

“His comments, he said, ‘Paradise is still a parish.’ When he said those words, that we are still a parish, I knew that we needed to stay together or we would lose this parish. We would merely close the doors. He came up with this idea of appointing me parish steward, a very unique position. I humbly take that,” [longtime parishioner Greg] Kidder said.

“We couldn’t just be victims, allowing others to care for us. We had to get back into ministry,” Kidder told FOX40. “Christ came here to teach us what relationship is really about. We are experiencing that, what relationship is. In this shared experience of the fire and the recovery, we’ve all had opportunity to reflect on what really matters. And what really matters is family. And we are a family. That is our faith.”

Whether it’s in Paradise, New York City, Los Angeles, Minneapolis or anywhere else in our shattered world, as Family Theater Productions founder Father Patrick Peyton famously said, “The family that prays together stays together.”

Even when you can’t do anything more at the end of a day, there’s always that.

About Kate OHare
Based in Los Angeles, Kate O'Hare is a veteran entertainment journalist, Social Media Manager for Family Theater Productions and a rookie screenwriter. You can read more about the author here.
Previous Post

August 11, 2020
'Eco-Challenge' Returns to Take on Nature and the Human Spirit
Next Post 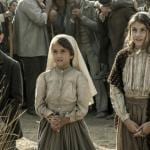 August 27, 2020 'Fatima' Finds the Reality Behind the Miracle
Recent Comments
0 | Leave a Comment
"Simply being subject to scrutiny for many Christian sects is "unfair". They're ignoring that THEY ..."
Michel Hulu’s ‘Under the Banner of Heaven’ ..."
"I think some people’s opinion about this movie will reflect their opinions of Mark Wahlberg ..."
Chris ‘Father Stu’: What Makes a Catholic ..."
"I too was not enamored of Bertha's ball gown, it wasn't particularly flattering, and that ..."
KMC HBO’s ‘The Gilded Age’: Oh, the ..."
"chaturbate Chaturbatechatrubatr Chatrubatrchaturbatew chaturbatewchatrubatw chatrubatwchatubate chatubate"
chaturbate ‘The Chosen’s’ Angel Studios Attracts Investment ..."
Browse Our Archives
Related posts from Kate O'Hare's Pax Culturati