What the Pope Said to Me, to Us

I met the Holy Father in October. It was a brief encounter — at the opening Mass for the Year of Faith, coinciding with the 50th anniversary of the opening of the Second Vatican Council and the convening of the Synod of the New Evangelization — during which Pope Benedict XVI gave me the most magnificent message to the women of the world, one Paul VI first issued, at the end of the Council. That in particular struck me as so significant: That the Holy Father would re-deliver a message: As if to say: We did not communicate this, as a Church. I think he meant that in humility and even apology on behalf of himself, the cardinals, bishops, clergy, religious — those we most visibly associate with the Church. And I took it, too, as a gentle admonishment — definitely a challenge — as well for those of us who see the beauty of the proposal the Church offers the world. Are we living fiat? Are we communicating this great love for the beauty of the gift of women and men in their uniqueness with our lives?

The world did not receive this message. To some degree it has not been open to it. But how could it be? How could it be if we weren’t shouting it from the rooftops with the joy and witness of our lives?

Anyway, I reflect a little on this — on my two encounters with the Holy Father — here. Some of you have read a bit about it in various columns I’ve written over the past months already, I suspect you won’t mind the revisit in light of ongoing events and the state of the world! 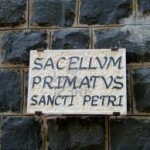 February 13, 2013
Why a Pope? What's This Catholic Business Anyway?
Next Post

February 14, 2013 Pope Benedict, the Catholic Church and the Dignity of Man
Recent Comments
0 | Leave a Comment
Browse Our Archives
get the latest from
Catholic
Sign up for our newsletter
POPULAR AT PATHEOS Catholic
1

Yes, It's About the White Supremacy
suspended in her jar
Related posts from Kathryn Lopez

Catholic
He Never Tired of Repeating That Only Name...
Kathryn Lopez