"We must often remember what Christ said, that not he who begins, but he that perseveres to the end, shall be saved." St Philip Neri #diobpt

Our Lady in May: one of the Joyful Mysteries of the Rosary depicted in stained glass of the Finding of Jesus https://t.co/caNy5aGC1S

4. Who have you introduced to Christ?
5.

God hears the prayers of our hearts. Go to Him. Stay with Him. #homilytweet pic.twitter.com/7LfTfNau7I

The Christian life is not a classroom but a pilgrimage, a journey, an exodus, a Passover. Jesus came to us and said, not “Take good notes of what I say,” but rather “Follow me.” He identified himself as the Way and said that no one can come to the Father except through him, by following his footsteps. And the means he sends us to help us to learn this Way of God more accurately is the Holy Spirit, who will lead us into all truth and remind us of everything Jesus has taught us.

7. On the power of the contemplative rhythm of the Rosary:

8. Saint Gregory of Nyssa on the Song of Songs in the Liturgy of the Hours today:

When love has entirely cast out fear, and fear has been transformed into love, then the unity brought us by our savior will be fully realized, for all men will be united with one another through their union with the one supreme Good. They will possess the perfection ascribed to the dove, according to our interpretation of the text: One alone is my dove, my perfect one. She is the only child of her mother, her chosen one.

Our Lord’s words in the gospel bring out the meaning of this text more clearly. After having conferred all power on his disciples by his blessing, he obtained many other gifts for them by his prayer to the Father. Among these was included the greatest gift of all, which was that they were no longer to be divided in their judgment of what was right and good, for they were all to be united to the one supreme Good. As the Apostle says, they were to be bound together with the bonds of peace in the unity that comes from the Holy Spirit. They were to be made one body and one spirit by the one hope to which they were all called. We shall do better, however, to quote the sacred words of the gospel itself. I pray, the Lord says, that they all may be one; that as you, Father, are in me and I am in you, so they also may be one in us.

Now the bond that creates this unity is glory. That the Holy Spirit is called glory no one can deny if he thinks carefully about the Lord’s words: The glory you gave to me, I have given to them. In fact, he gave this glory to his disciples when he said to them: Receive the Holy Spirit. Although he had always possessed it, even before the world existed, he himself received this glory when he put on human nature. Then, when his human nature had been glorified by the Spirit, the glory of the Spirit was passed on to all his kin, beginning with his disciples. This is why he said: The glory you gave to me, I have given to them, so that they may be one as we are one. With me in them and you in me, I want them to be perfectly one.

Whoever has grown from infancy to manhood and attained to spiritual maturity possesses the mastery over his passions and the purity that makes it possible for him to receive the glory of the Spirit. He is that perfect dove upon whom the eyes of the bridegroom rest when he says: One alone is my dove, my perfect one.

Depend on Jesus for your salvation through prayer. #dailyeSpiration pic.twitter.com/EJW5nzO4jJ 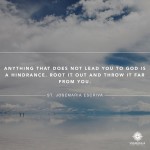 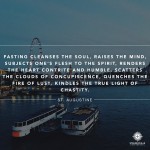 May 11, 2016 10 Catholic Things that Caught My Eye Today (May 11, 2016)
Recent Comments
0 | Leave a Comment
Browse Our Archives
get the latest from
Catholic
Sign up for our newsletter
POPULAR AT PATHEOS Catholic
1