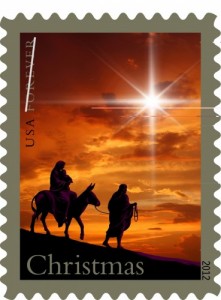 So Joseph got up and took the Child and His mother while it was still night, and left for Egypt.  He remained there until the death of Herod. This was to fulfill what had been spoken by the Lord through the prophet: “Out of Egypt I called My Son.”

For fifty years, the U.S. Postal Service has issued a special stamp at Christmastime in recognition of the season.  The traditional religious stamp has typically featured a medieval painting of Madonna and Child; but this year, the artists have chosen to tell a different part of the Christmas story—the Holy Family’s flight into Egypt.

The 2012 stamp was introduced on October 10 in a first-day-of-issue ceremony in the Bethlehem Chapel at the Washington National Cathedral of the Episcopal Church.

Louis Guiliano, representing the postal service’s Board of Governors, explained that since 1962, the postal service has issued two stamps for the holiday: a religious stamp (typically featuring a Madonna and Child, as portrayed by a medieval artist), and a secular stamp.  Guiliano explained:

“The primary reason for Christmas is to celebrate the birth of Christ.  Since 1962, the religious stamp has been coupled with a secular one, featuring items such as tree ornaments, evergreens, or nutcrackers.”

Noting that this year’s selection of theme, drawn from a passage in the Gospel of Matthew, is a shift from the usual depiction of Mary and the infant Jesus, Guiliano said:

William Gicker, who is Creative Director for the stamp program at the U.S. Postal Service and editor of the USPS quarterly journal USA Philatelic, has worked on a number of projects including the Star Wars stamps and the Disney series.

Greg Breeding, a designer who co-founded and serves as creative director for Journey Group, has taught design courses in Ukraine, Malaysia and the Czech Republic.  His first stamp for the U.S. Postal Service was The War of 1812: USS Constitution.  “I’m interested in creating art for the public good,” Breeding says, “and honoring a person or event on a stamp highlights and celebrates what’s positive in our culture.”

Nancy Stahl is an artist in New York City whose work includes twelve stamps for the postal service, and is especially known for her highly stylized animal stamps.