THE O ANTIPHONS and the Beatles: Great Secrets Revealed?

First, I mean no disrespect—but if you are a theologian or a historian or a liturgist, please pop in here to explain something for me.

I’ve been reading about the O ANTIPHONS, those profound anticipatory verses from Isaiah which, in the Catholic tradition, are read at Vespers from December 17 through December 23, leading up to the Christmas season.  Lovely prayers, most certainly!  But over and over in the literature, as an after-note, I read that the first letters of the seven Antiphons, when read in reverse, convey a secret message.

I first read about this great secret on Wikipedia, but it pops up on other, more scholarly sites as well.  Apparently, the finding originated with Professor Robert Greenberg of the San Francisco Conservatory of Music.  Professor Greenberg noted that if one starts with the last title and, reading them in reverse, takes the first letter of each, one will see the Latin words “ero cras,” meaning “Tomorrow, I will come.”  Greenberg believes that as we prepare for Christ’s coming in Advent, and as we pray the seven Messianic titles of the O Antiphons, the Lord Jesus now speaks to us.

HUH?  So what you’re saying, Dr. Greenberg, is that the Holy Spirit inspired the prophet to write in Hebrew, or whatever language was used for that part of the Bible, using words which—when translated into Latin, then read backwards—would spell a secret message? That this would happen years later, after the Catholic Church had established its locus in Rome and when the words of Scripture were published in the vernacular of the time, Latin?

I dunno.  This isn’t a doctrine which has been declared infallible, right?  Because myself, I’m just not buying it. 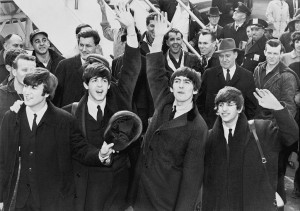 ANOTHER TIME, ANOTHER SECRET EXPOSED—Excuse me if I am wary of such pronouncements.  See, I remember the frenzy when, on a Saturday afternoon in 1969, Russ Gibb, DJ on Detroit’s WKNR (Keener) radio, got a call from an EMU student who claimed that the Beatles song “Revolution 9,” when played backwards, says “Turn me on, dead man.”  And at the end of “Strawberry Fields Forever,” according to the same student, a muffled voice says “I buried Paul.”

So started the rumor, buttressed by another and yet another cryptic message, that Paul McCartney had died in a 1966 motorcycle accident.  The pièce de résistance:  On the cover of “Abbey Road,” the four Beatles are crossing the street, and Paul is walking barefoot.  “SEE!” cry the conspiracy theorists.  “Paul is barefoot, and people in coffins are barefoot!  People aren’t buried with their shoes on!”  (I still don’t know whether or not that’s true, so maybe funeral directors can also pop in to opine about this difficult issue.)

AND THEN THERE’S THE BIBLE CODE!  That book was flying off store shelves in 1997.  People wanted to see the secret messages revealed in the Bible.  Using the Equidistant Letter Sequence method, a group of scholars had three years earlier claimed to find cryptic messages on the pages of scripture; and in 1997, journalist Michael Drosnin released their findings in a best-selling book.  Problems abound within the theory itself; but scientific method aside, the “secret code” again relies on a specific printing of a specific version of the Bible (the King James), or else the letters won’t fall into the correct order.  I think by this time, everyone except a few Oprah! fans have recognized the flaws in the theory and have moved on.

So back to the O Antiphons.  They are beautiful prayers, rich with expectancy, with anticipation of the coming Christ, and they are well worth our attention in these days leading up to our celebration of His birth.  The Antiphons refer to Old Testament prophecies of Isaiah, pointing to the coming King.

But the “secret message”?  You can decide for yourself.  In order of their appearance in the prayers for each day, the O Antiphons are as follows:

*Remember that Emmanuel means “God with us.”  And so He is.

Enjoy this last week of Advent.

December 19, 2015
LOOKING BACK: Eight Really Big Stories from "Seasons of Grace"
Next Post