Behind the Scenes at Vatican II: Yves Congar Captures a Historic Moment

Yves Congar was a complex man.  The New York Times, in his obituary, called him a “vigorous ecumenist” and a “promoter of the laity.”  His life in the Church toggled between acclaim and rejection.

So who was this controversial figure who played such a large role in the Second Vatican Council?

Ordained to the priesthood in France in 1930, Congar served from 1931 to 1954 as chair of theology and apologetics at the Saulchoir, the Dominican seminary just south of Paris, where he taught on the defense and proofs of Christianity.

Congar was drafted into the French Army and served as a chaplain during World War II.  He was captured by the Nazi regime in 1940 and spent five years as a prisoner of war.

His life story seems to be a string of controversies:

The Ecumenical Movement.  Yves Congar was a defining force of the ecumenical movement within the Catholic Church.  Before his time, the movement had been seen as a largely Protestant enterprise; but in 1936, Pere Congar preached a series of sermons on the subject in Paris.  The following year, he attended ecumenical conferences in Oxford, England, and Edinburgh.  His enthusiasm for ecumenism remained a central focus in his speaking and writing throughout his life.

The French priest-worker movement.  Pere Congar was one of the leading proponents of a missionary movement in France which encouraged Catholic priests to take up work in factories, and in this way to experience the everyday life of the working classes.  A worker-priest supported himself exclusively by his own earnings, and was freed by his bishop from parochial work, in order to live and work alongside the common man.

Prohibition from Preaching.  The Vatican disapproved of the worker-priest movement, citing the critical need for priests to serve in an ecclesiastical capacity.  Worker-priests, the Vatican feared, would be led into trade union affiliations and would be subject to too many secular temptations.  Pere Congar was severely chastised for his espousal of the controversial movement.  For two years during the pontificate of Pope Pius XII, he was forbidden to teach, lecture or publish;  and he was reassigned to posts in Jerusalem and Rome, where his influence on the French Catholic Church would be severely restricted.

Winning the Confidence of Pope John XXIII.  By 1960, as the Second Vatican Council opened the door to ecumenism, Congar’s life work was once again received favorably by Pope John XXIII.  He was summoned to Rome in 1960 as Consultor to the Theological Commission, in which role he exerted a significant influence over the direction of the Second Vatican Council—leading to a shift toward modernism.  Throughout the Council, Congar served on a number of committees that worked on drafting conciliar texts.  The daily journal which he kept during that time records events and developments at the Council which would otherwise be forgotten.

The Collegiality of the Bishops and the Diminution of the Papacy.   Pius IX, together with the First Vatican Council, infallibly defined that “Peter alone was honored with the true and proper primacy of jurisdiction, to the exclusion of the other Apostles, be they considered individually or as a group” (De Ecclesia Christi of June 18, 1870, DR 1822). Fr. Yves Congar and other progressive theologians opposed this doctrine and argued that the papacy is collegial—with primacy deriving instead from the full College of Bishops, as successors of the College of Apostles.  In 1975, Congar’s book Jean Puyo Interroge le Pere Congar opposed the concept of the Pope as the Vicar of Christ.  Explaining his position, he wrote:

“Some say that only the Pope has universal jurisdiction in the Church, and that the jurisdiction of the Bishops proceeds from him. In my opinion, this thesis is absolutely unacceptable. It has the advantage of being simple and coherent, but it turns its back on many texts and facts of early Christianity.

“In the opposite sense, there is the thesis that affirms the power in the Church, even the power of the Pope, would always be collegial. The Pope would always act as ‘head of the College.’ He could not act by his own power as ‘Vicar of Christ’ (I place the last words between quotation marks because I am not comfortable with this expression, which I personally avoid using). ….

Despite the controversies which surrounded his theology and his ecclesiology, Pope John Paul II—in recognition of his lifework—named him to the Cardinalate in 1994.  He died the following year in Paris, at the age of 91. 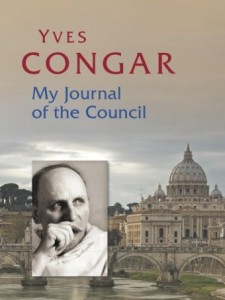 Just in time for the Year of Faith and the 50th Anniversary of Vatican II, Congar’s journal—originally published in French in 2002–has been released by Liturgical Press in an English-language edition.  Yves Congar: My Journal of the Council is an exhaustive (979-page) and frank backstory of the Second Vatican Council.

In this intimate peek into the workings of the great Council, the reader senses Congar’s joy:

I received from Fr. Chenu the draft of a preliminary declaration.  It seemed to me there and then that this initiative was INSPIRED, that it was THIS that was NEEDED!  (p. 81)

As well as his deep frustration:

….I listened to the speeches for a while, but it was so boring that I left the tribune.  Each one speaks from his own idea of the Breviary; they should put all that to a commission composed of competent people.

Names now familiar to scholars roll off Congar’s pen in syncopated rhythm:  Suenens, Rahner, Bea, Ottaviani, Ruffini, König, Lefebvre, Schillebeeckx, Silva, Ratzinger….  Oh, and Father Ratzinger—the future Pope Benedict XVI—shows up with regularity, and the reader sees his disciplined style and his devotion to the Church.  I laughed at one time when Congar wrote of a lengthy discussion during a private dinner with a group of priests and dignitaries, including Ratzinger; Congar called the dinner and his dining companions “pleasant but insignificant.”

At one point, Congar worries that things are moving too quickly, and that more study is required.  He writes:

I am not an integrist, as people in France say that I am.  I have spent my whole life studying and serving theology.  All these matters are difficult ones.  That is why I consider that the Council is too hasty.  I have said so to the Pope.  We ought to take much more time.  We cannot be finished by Wednesday….  (p. 275)

Pere Congar was a strategist:  When he learned that 98 bishops were in residence at the Domus Mariae, he went there; and in a short space of time, he met with ten of them.  Monsignor Helder, secretary of CELAM (the Latin American Episcopal Conference), arrived.  Of this opportunity for discourse, Congar wrote enthusiastically:

It is extraordinary:  only today, at lunch-time, they had spoken of me and had said that they ought to bring me to see them.  After chatting for a while, we went into a room where about a dozen young bishops joined us.  They asked me questions, Mgr Helder led: not only is he a very open man, but he is full of ideas, of IMAGINATION and enthusiasm.  This is what is lacking in Rome: ‘vision’.

And on it goes:  Congar’s detailed reminiscences of small spats and his deep disappointments; his candor regarding his own limitations, and his fear that he’d accepted more editing and writing responsibilities than he could fulfill; his reflections on the papacy, the Mystical Body of Christ, and the archeological treasures in the catacombs.

More than a log of the official proceedings, Congar recounts conversations in hallways, on doorsteps, and in the back seats of cars.

There is no way to briefly summarize the contents of this weighty tome—chock full, as it is, of weighty ideas.  But despite the serious topics he undertakes, Congar writes simply and clearly, and his reflections are accessible to all who enjoy the give-and-take of doctrinal reflection and ecclesiastical vision.  For the serious scholar of Catholicism and the Council, this new volume contributes immeasurably to the understanding of Vatican II.  It’s a worthy and wonderful project to undertake during the Year of Faith. 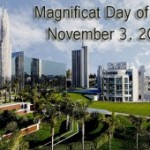 November 5, 2012 PRAYER BEFORE AN ELECTION
Recent Comments
2 Comments | Leave a Comment
Browse Our Archives
Related posts from Seasons of Grace