The meeting began with a presentation of the just-released report by CARA (the Center for Applied Research in the Apostolate), entitled “Catholic New Media Use in the United States, 2012.”

The researchers interviewed 1,047 self-identified Catholics in September 2012 on the topic of their media use.    There was some concern that the Church may not be connecting with its public as well as it might be.  As evidence, presenter and study author Dr. Mark Gray cited CARA’s research in 2012 which, when compared with a 2004 study, showed a decline of 37% in Google searches using the word “Catholic.” 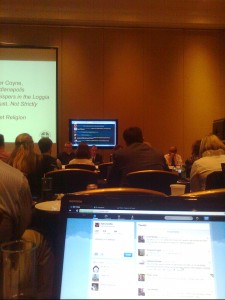 The  jury’s still out on the report, I think.  I raised my eyebrows at several of its findings; for example, I was surprised by the claim that most people turn to their parish bulletin as their primary source of information about the Catholic faith.  More about this later, once I’m back in the relative calm of my home office.

Four excellent panelists responded to the study’s findings:  Bishop Christopher Coyne, Rocco Palmo, Mary DeTurris Poust and Terry Mattingly.  Then the floor was opened to comments and questions: bishops to bloggers, and bloggers to bishops.  The dialogue was energetic and productive.

How fitting for a merry Band of Bloggers:  We ended the afternoon ended with an early dinner at the James Joyce Irish Pub, near our hotel.

Elizabeth Scalia, missing because of a delayed flight, how we missed you!

Thanks to Lisa Hendey, my roommate from the Vatican Blogfest last May and again this year, and to Tom McDonald (God and the Machine) for sharing their excellent photos.

November 12, 2012 Heavy Topics in Baltimore; and a Great Concelebrated Liturgy
Recent Comments
0 | Leave a Comment
Browse Our Archives
get the latest from
Catholic
Sign up for our newsletter
POPULAR AT PATHEOS Catholic
1

Ta-da! Janetheactuary.com is here!
Jane the Actuary
Related posts from Seasons of Grace