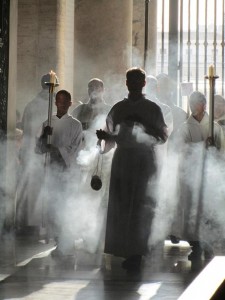 This morning in Rome, French Catholics processed into St. Peter’s for the morning Mass, smoldering incense rising like our prayers toward heaven.  Friend Monsignor Richard Soseman—a priest from the Diocese of Peoria who is an official in the Congregation for the Clergy in the Vatican—was on hand to capture this inspiring photograph.

But why do Catholics use incense, anyway?

In the ancient world, incense was frequently used in religious rites.  The Assyrians, the Babylonians and the Egyptians all used incense, purportedly to ward off demons.   The Israelites burned incense in Temple rituals, along with their thanksgiving offerings of oil, grain, fruits and wine (Numbers 7:13-17).  Moses, in the book of Exodus, erected a golden altar for the burning of incense at the entrance to the meeting tent where the Ark of the Covenant was kept (Exodus 30:1-10). And today, Catholics and some other faith traditions use incense in their worship, adding mystery and formality to the liturgy.  The aromatic smoke signifies our prayers, which rise to heaven and to the ear of God.

In the Book of Revelation, incense is used in the heavenly worship before the throne of God:

“Another angel came in holding a censer of gold. He took his place at the altar of incense and was given large amounts of incense to deposit on the altar of gold in front of the throne, together with the prayers of all God’s holy ones. From the angel’s hand, the smoke of the incense went up before God, and with it the prayers of God’s people.”

In the Catholic Church, the GIRM (the General Instruction of the Roman Missal) specifies when incense may be used during the liturgy:

The priest may also incense the Crucifix and the Paschal Candle. During a funeral liturgy, the priest incenses the coffin—both as a sign of honor to the deceased, and as a sign of the faithful’s prayers for the deceased rising to God.

April 29, 2013
Pope Francis' Prayer Intentions for May
Next Post