On Thursday mornings, a group of Polish worshippers gather in the St. Sebastian Chapel, just inside St. Peter’s Basilica on the right side.  There, at the tomb of Blessed Pope John Paul II, they attend Mass and receive the Eucharist.

This morning, it was Pope Francis himself who celebrated the liturgy in the St. Sebastian Chapel.  Vatican Radio reported on his homily, which focused on the love of God, and on two powerful images illustrating the different ways this love may be received:  the apostle Paul, and the city of Jerusalem.

On the one hand, he said, we have the certainty of the apostle Paul: “no one can separate me from the love of Christ”. Paul lived through persecution, through illness, through betrayal, but the love of Christ was always at the centre of his life. On the other hand, Pope Francis continued, we have the sadness of Jesus as he looks upon Jerusalem, the unfaithful. And the heart of Jesus wept for this city that didn’t understand the love of God, for this love that was not received.

Pope Francis contrasted the two images – Paul, who feels he is a sinner, but finds strength in the love of God, and Jerusalem, with its people who don’t accept the love of God, or worse, who half accept it, depending on their own convenience. So let us ask ourselves, Pope Francis concluded – do I have a strong love, like Paul, or do I have a tepid heart, like Jerusalem?

In May 2011, I was in Rome for the Vatican Blogfest and the Beatification of Pope John Paul II.  The beloved Pope’s body had, until that time, lay buried in the crypt level of St. Peter’s.  For the Beatification though, his simple wooden casket was removed from its marble tomb and he was moved to the dais for the Beatification ceremony; then for a day or two, his casket was placed inside St. Peter’s Basilica, where the faithful passed in silent prayer and reflection.  Finally, he was reburied in a more prominent place, under the altar in the St. Sebastian Chapel, where it would be easier for the faithful to find his tomb. 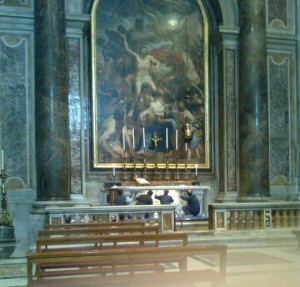 I was still in Rome and happened upon a crew of workmen, sealing the new tomb.  Here [right] is my photo of the tomb being sealed.

The following morning our friend, Monsignor Richard Soseman, an official with the Congregation for Clergy, had offered to celebrate Mass for our group of American bloggers in St. Peter’s Basilica.  While waiting to make our connection, we saw Cardinal Stanisław Dziwisz, Archbishop of Krakow and former private secretary to Pope John Paul II, who was passing through the Basilica on his way to celebrate the first Mass at the tomb.

October 31, 2013 A Happy Ending to USF “Priest=Toilet” Controversy
Recent Comments
0 | Leave a Comment
Browse Our Archives
get the latest from
Catholic
Sign up for our newsletter
POPULAR AT PATHEOS Catholic
1

A Reflection on Church Closures, Passover & Healing...
It sure is a strange time to be alive. In the wake...
view all Catholic blogs
What Are Your Thoughts?leave a comment
Copyright 2008-2020, Patheos. All rights reserved.