“Heaven Is For Real” Movie Is Coming to Theatres at Easter

“Heaven Is For Real” Movie Is Coming to Theatres at Easter November 20, 2013 Kathy Schiffer

Three-year-old Colton Burpo underwent emergency surgery in 2003, following a burst appendix.  On the operating table, Colton had a brush with death, and lay unconscious for 17 days; and doctors told his family that he was not expected to live.

But Colton did survive—and several months later, he began to tell stories that shocked even his family about the time while he lay unconscious.   He described events about which he could never have known, and people whom he had never met.  He described a sister who had died, although Colton’s parents had never told him about his mother’s miscarriage.  He remembered meeting his great-grandfather, “Pop”, who had died 30 years before Colton was born.  Colton recognized Pop’s photo; not the photo of Pop from his later years, but as a younger, robust man.  People in heaven, Colton explained, were never old and never wore glasses; they were all strong and healthy, all in their 20s or 30s.

Colton had other stories, too:  About sitting on Jesus’ lap while the angels sang songs to him.  About meeting John the Baptist, and two of the apostles.  About Mary kneeling before the throne of God, and at other times standing beside Jesus.  About Jesus riding a rainbow-colored horse.

Colton’s father Todd, a Christian pastor, recounted the story of his son’s near death experience at Crossroads Wesleyan Church in Imperial, Nebraska, where he serves as pastor.  Word of the story spread, and eventually Todd Burpo was invited to collaborate with co-author Lynn Vincent to write a book Heaven is for Real: A Little Boy’s Astounding Story of His Trip to Heaven and Back

. The book, published by Thomas Nelson Publishers, was released in November 2010 and within three weeks, it had reached #3 on the New York Times bestseller list.  By January 2011, there were 200,000 copies in print, and the book was a #1 bestseller.  By April 2012, over one million e-books had been sold.  Heaven is for Real

remains #12 on the NYTimes best seller list for the week of November 24.

Colton Burpo is eleven years old now, and his story is being told in a much-anticipated movie.  The movie version stars Greg Kinnear (“Little Miss Sunshine”) as Todd Burpo, Kelly Reilly (“Flight”) as his wife Sonja Burpo, and first-time actor Connor Corum as the winsome Colton.  Heaven Is for Real will open in theatres April 16, 2014.

The trailer for Heaven Is for Real has just been released.  Watch it here.

If you like Colton’s story, you’ll like another story I told about Dr. Eben Alexander, an atheist who also had a near death experience.  Dr. Alexander was converted by the experience, and retold his story in a book Proof of Heaven:  A Neurosurgeon’s Journey Into the Afterlife.  Here is his story. 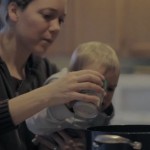 November 20, 2013 What Do Stay-at-Home Mothers DO All Day?
Recent Comments
1 Comment | Leave a Comment
Browse Our Archives
get the latest from
Catholic
Sign up for our newsletter
POPULAR AT PATHEOS Catholic
1