OH NO! Hours After Pope Francis Departs, Church of the Nativity Is Damaged by Fire

A fire broke out early Tuesday in the Church of the Nativity, on the traditional site of Jesus’ birth.

Pope Francis visited the Bethlehem church on May 25.  The pope had left the Holy Land only hours before the fire was discovered at 4:30 a.m. Tuesday by a security guard who smelled smoke.

Apparently, the fire was accidental–starting when an oil lamp fell over, damaging some fabric wall hangings insid the Grotto of the Nativity itself.  The Lebanon Daily Star reports

Bethlehem Governor Abdel-Fatah Hamayel told AFP it was a small fire that had broken out accidentally when an oil lamp fell over just before dawn, causing some damage to fabric wall hangings inside the Grotto of the Nativity itself.

“It was an accident that started when an oil lamp fell over. The fire started on its own, then burned itself out,” he said.

The fire, which was discovered at around 4:30 a.m. (0100 GMT) when the security guard smelled smoke, broke out in the cave underneath the 4th-century basilica where Christians believe Mary gave birth to Jesus.

Inside, the charred remains of several brightly-coloured wall hangings hung limply against the cave walls which were blackened with soot. Two ornate icons of Mary holding Jesus sustained smoke damage.

“We have asked those who work there many times to put out the oil lamps and candles when the church closes at 6 p.m.,” Hamayel said, adding that similar accidents had happened in the past.

This is not the first time that fire has damaged the historic church.  The basilica, which is constructed over the site that is believed to be the birthplace of Jesus, was originally commissioned by the Emperor Constantine and his mother Helena in 327 A.D.   That original basilica was completed in 339 A.D., but was destroyed by fire during the Samaritan Revolts in the sixth century.  A new basilica was constructed by the Byzantine Emperor Justinian in 565 A.D.  Since that second construction there have been numerous architectural additions, including its bell towers.

Due to its cultural and geographical history, the site holds a prominent religious significance to those of both the Christian and Muslim faiths.  More than a million pilgrims visit the basilica each year. 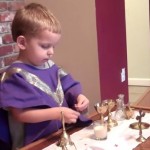 May 27, 2014
Future Priests? Around the World, Children Playing "Mass"
Next Post

May 27, 2014 ANOTHER FIRE in a Jerusalem Church on the Heels of Pope's Visit
Recent Comments
1 Comment | Leave a Comment
Browse Our Archives
get the latest from
Catholic
Sign up for our newsletter
POPULAR AT PATHEOS Catholic
1

Catholics: They Are Not Coming Back...Unless...
Thin Places
Related posts from Seasons of Grace

Demonic Possession or Epilepsy? (Bible & Science)
Matthew 17:15, 18 (RSV) “Lord, have mercy on my son, for he is...
view all Catholic blogs
What Are Your Thoughts?leave a comment
Copyright 2008-2020, Patheos. All rights reserved.