Dean Koontz’ “THE CITY” May Be His Best Novel Yet 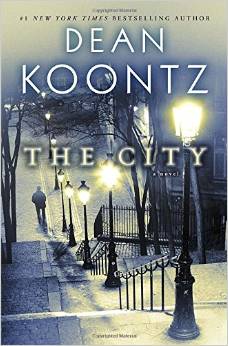 If you are a regular reader of this blog, you may know that I am a huge fan of Dean Koontz.  I’ve written before about his best-selling mystery novel Innocence

–and, at the same time, told you of my affection for Odd Thomas

, Koontz’ 19-year-old fry cook whose story has become a popular series and a film.

I believe, though, that Koontz’ newest novel, The City

, has the potential to overtake even his blockbuster Odd Thomas series  in popularity.

That’s because The City

is perhaps the most philosophical of Koontz’ novels to date–remarking, as it does, on the intrinsic value of the human person, the existence of good and evil, the strength of family.  It showcases the droll humor of Koontz’ prose, his quick turn of a phrase.  But while it does have a characteristic element of mystery and magic, it’s not so heavily laden with the supernatural that the realists in the room will raise an eyebrow when a small green space creature runs through the backyard, as one may encounter in some of his earlier novels.

takes place in a mythical metropolis, not unlike New York, which Koontz first created for his novel Innocence

.  (Spoiler:  There will likely be one more as-yet-unnamed novel which takes place in the same city.)

The story is told through the eyes of nine-year-old Jonah Ellington Basie Hines Eldridge Wilson Hampton Armstrong Kirk.  Named for a long line of late great jazz musicians, young Jonah also displays a musical talent which inspires Koontz’ other characters.   Jonah has a mother whose steadfast love will be an inspiration to mothers everywhere.   His father, on the other hand, is a hapless dark villain, his life a gallimaufry of death and destruction.

“As if my spinal fluid had been replaced with  a refrigerant, a chill climbed vertebra to vertebra from the small of my back to the base of my skull.”

And in the voice of an insightful nine-year-old boy, Koontz the Philosopher writes things like this:

“…two things matter more than anything else, truth with a lowercase ‘t’ and Truth with an uppercase ‘T’.  You have to tell the truth, demand the truth from others, recognize lies and refute them; you’ve got to see the world as it is, not as you want it to be, not as others who wish to dominate you might say it is.  Embracing truth frees you from false expectations, fruitless pursuits, disappointments, pointless anger, envy, despair.  And the bigger kind of Truth, that life has meaning, is the surest source of happiness, because it allows you to recognize your true value and potential, encourages a humility that brings peace.  Most important, the big-T Truth makes it possible for you to love others for who they are, always without consideration of what they might do for you, and only from such relationships arise those rare moments of pure joy that shine so bright in memory.”

There is Faith, the strong reliance upon God which is a matter-of-fact part of Jonah’s existence:

“Perhaps I feared to speak because words mattered in our family–in the beginning was the Word–and when I spoke, thereafter would come conversation and with conversation the reality, the ‘why.'”

And there is Hope.  Koontz remarked in an interview that there are so many crises facing our nation and our world today; yet when he researched the tumultous ’60s for this book, he found that it was no different–that everything seemed to be falling apart then, as now.  We survived the ’60s; and that gives us a confidence that we can survive the current era, with the help of God.

August 20, 2014
James Wright Foley: A Strong Faith in a Strange Land
Next Post