The Pope is coming to America!

We knew there was a good chance that Pope Francis would attend the World Meeting of Families in Philadelphia, which had been established by his predecessor; but we had no assurance until now.

On Monday, November 17, Pope Francis made the announcement at the Colloquium on Complementarity of Man and Woman.  He said:

“I wish to confirm according to the wishes of the Lord, that in September 2015, I will go to Philadelphia for the World Meeting of Families.  Thank you for your prayers with which you accompany my service to the Church.  Bless you from my heart.”

You can see the agenda and the list of speakers confirmed to date here.

And here is the official Prayer for the World Meeting of Families. 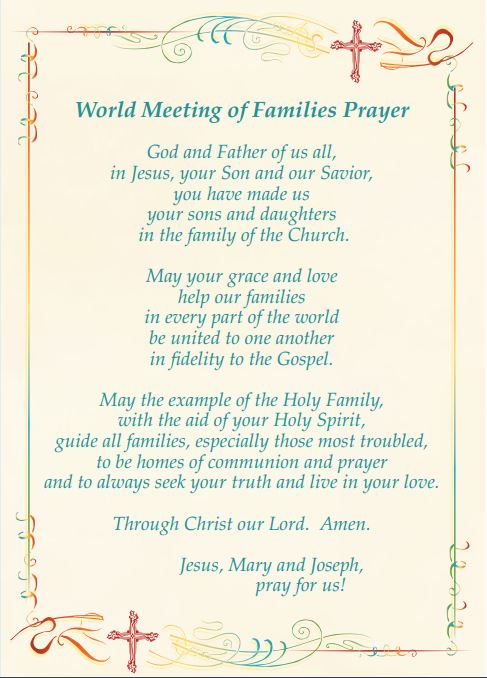 November 18, 2014 God and Abraham Playing "Theological Chicken": Spitzer and Dershowitz Face Off in Mock Trial
Recent Comments
6 Comments | Leave a Comment
"I'll follow you over Kathy. I was probably in more sympathy with your point of ..."
Manny Parting Is Such Sweet Sorrow…. My ..."
"If you're at all interested in knowing . . . the Catholic Dogma . . ..."
M. Bizzaro Parting Is Such Sweet Sorrow…. My ..."
"Thank you, Mrs. Harris! Christmas blessings to you. I hope to see you over at ..."
kathyschiffer Parting Is Such Sweet Sorrow…. My ..."
"Let's defer to the experts (namely, the tract writers (tractors?) at Catholic Answers) for a ..."
BadinageBoy Heaven Is For Real: Secrets Colton ..."
Browse Our Archives
get the latest from
Catholic
Sign up for our newsletter
POPULAR AT PATHEOS Catholic
1

St. Maximos, The Will, And Universal...
A Little Bit of Nothing
Related posts from Seasons of Grace