Atheist’s “Modern Christmas Carol” Is an Indictment of Social Media

Bob Seidensticker, who writes at the Atheist Portal at Patheos, is a sparring partner and a friend.  Our paths don’t cross on a daily basis; but when I write to counter some aspect of atheist thought, Bob is sure to pop in at my combox or on Facebook and tell me why I’m wrong.  He is always polite, and he helps to clarify why I’m actually quite right.

Somehow, Bob has never appreciated the logic of a worldview that presupposes the existence of a Creator.

And I, for my part, have not enough faith in serendipity and happenstance to believe that tree frogs and salamanders and pupillary light reflex just popped into existence on their own, without the initiation of a divine Being who holds the earth in balance.  I think of this humorous argument for special creation:

Anyway, Bob invited me to read and review his book A Modern Christmas Carol–I think in the unfounded hope that I might give it a positive review and, better still, see the folly of my [Christian] ways and burst onto the Atheist Portal. 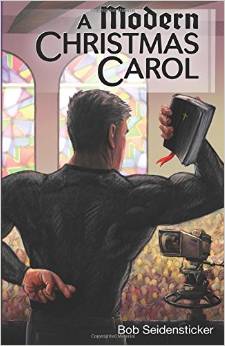 A Modern Christmas Carol is a short retelling of Dickens’ classic that examines the fictional life of Nathan Thorpe, a Christian televangelist.

As readers, we are invited to walk with Thorpe as he moves from a shallow, half-hearted existence to a more fulfilled life marked by caring and honesty that had previously been absent in this life.

Along the way, assisted by the vision of his former business partner and three ghosts, Thorpe undergoes a radical transformation of character as he moves from a Christian faith to Agnosticism at the brink of Atheism.  In what must surprise absolutely no one who is familiar with Seidensticker’s background, Thorpe’s conversion of heart and mind coincides with his movement away from traditional Christianity.

Whether Seidensticker’s work achieves its purpose is debatable.

This book is filled with caricatures and clichés, and seems totally incapable of seeing the forest (Christianity) for the trees (including, but not limited to, theodicy–the study of the problem of evil).

In fact, before Thorpe can make the jump from page 1 to page 2, he has already been exposed as materialistic, uncaring, and alienated from his wife.  And it goes downhill from there.  We also learn that Thorpe is manipulative, self-absorbed, cynical, unfaithful, power-hungry and hypocritical.  And those are his better qualities!  It’s no wonder no one wants to be a Christian!

As Seidensticker’s story progresses, we are treated to other insights that help us to “realize” the strengths of Atheism in the face of Christianity’s weaknesses.  Terrible injustices (e.g., 20 million slaves who are mistreated, crippled and repeatedly raped) are laid at the feet of organized religion; and the incompatibility of faith and reason is a common theme.  People of intelligence, don’t ya know, are attracted by evidence, not by faith.

Perhaps Seidensticker hasn’t yet had an opportunity to read St. John Paul II’s “Fides et Ratio.”  Perhaps he hasn’t had an opportunity to converse with the majority of scientists who believe in a personal God or in a higher power.  Perhaps he is unaware of the scientific accomplishments of believers such as Monseigneur Georges Lemaître, who proposed what became known as the Big Bang Theory.

Perhaps it would surprise Seidensticker to learn that among many Christians, there is no conflict between science and faith, either in the Bible or anywhere else in their religion.

Seidensticker is more interested in promoting an atheistic moral relativism as the solution to all the world’s problems.  Go figure.

So you get the idea:  I didn’t love the book or accept its premise.

But let’s stop for a minute to consider WHY Bob Seidensticker thinks so poorly of Christians that he could imagine an unsavory character like Reverend Thorpe.

See, I think part of the problem is that Bob’s experience with Christians has exposed him to people who, if not as corrupt as Thorpe, are deeply flawed and who fail to demonstrate the love of Christ in their interactions with him.  As I said, he has commented on my blog, and his views–while contrary to mine–have always been expressed with courtesy.  But while some readers are willing to engage Bob in the realm of ideas, his carefully stated ideas draw fire from abrasive readers who say things like this:

“In a fit of solipsistic butthurt, you blocked me from your blog several months ago, thereby fulfilling the true ‘spirit ‘ of your worldview.”

NOW I ASK YOU:  Is this the kind of retort that’s going to score points and win hearts and minds to Christ?

Because you know, that’s what we’re all called to do.  Not to hurl the sharpest knives in an on-line argument, but to mirror Christ’s love, to propose the idea of faith and to make it seem attractive by our own compassion and thoughtfulness and strong character.  By being truly “Christian” in our interactions with others in the world, we can be the magnet that draws others to seek, as the apostle Paul writes, the reason for the joy that is within us.

Why does Bob Seidensticker–and why do others on the Atheist Portal and out there in the greater society–fail to understand the Faith that’s been handed down to us from the Apostles?

But perhaps–and I fear that this is too often the case–the Christians they have encountered on-line and in daily life are poor ambassadors for Christ, braggarts and windbags who hurl insolent arrows of disdain, who take no prisoners in the conversation about First Things.

For the hurts which have been inflicted by self-aggrandized Christians, Bob, please accept my sincere apology.  But please don’t let the fractious arguments of a vocal minority represent the Faith.  Please consider the more respectful apologists for Faith, and open the pages of C.S. Lewis’ Mere Christianity

or Lee Strobel’s The Case for Christ

or Josh McDowell’s Evidence That Demands A Verdict

As for my readers:  I really do try to maintain some decorum in my combox, and I deeply regret that the harsh words of some are so off-putting.  Please, dear readers, criticize IDEAS and not PEOPLE.

And so, as Tiny Tim observed in Dickens’ immortal work, “God bless us.  Every one.”

December 21, 2014
God Showed Up in Our Neighborhood
Next Post

December 23, 2014 Liberal Blog's Diatribe Against the Knights of Columbus
Recent Comments
32 Comments | Leave a Comment
Browse Our Archives
get the latest from
Catholic
Sign up for our newsletter
POPULAR AT PATHEOS Catholic
1