In a press conference Monday, September 28, scientists from the National Aeronautics and Space Administration confirmed that they have identified liquid water flowing on the surface of Mars. NASA researchers, using data from an imager aboard the Mars Reconnaissance Orbiter, confirmed that the dark streaks on the planet’s surface advance and recede, depending on the season. It’s now believed that what scientists are seeing is running water. And this finding increases the likelihood that there could be living organisms on the red planet.

James L. Green, director of NASA’s planetary science division, discussed the possibility. “We haven’t been able to answer the question ‘Does life exist beyond Earth?’” Green said during the news conference. “But following the water is a critical element of that. We now have, I think, great opportunities in the right locations on Mars to thoroughly investigate that.”

NASA researchers regard their discovery as “cutting edge”; but on the contrary, science is pondering a potentiality which has long been considered by the Catholic Church. Jesuit Brother Guy Consolmagno, director of the Vatican Observatory, seems to have beaten NASA to the punch in imagining “Brother Extraterrestrial.” Brother Guy, who was named Director of the Vatican Observatory by Pope Francis in September 2015, has already thought about the ramifications of finding intelligent life on other planets. What if you met an alien from outer space? Would you welcome him into your RCIA program and baptize him at the Easter Vigil? 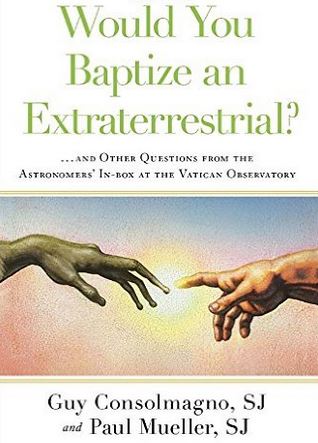 Brother Guy explored the issue of life on Mars and more in his book Would You Baptize an Extraterrestrial?, which he co-authored with Father Paul Meuller, S.J. Together, the Jesuit scientists looked at serious and humorous questions from the astronomers’ in-box at the Vatican Observatory, and revealed how science and faith look at the same issues in different but complementary ways.

Pope Francis raised the issue in a homily in May 2014, asking, “Imagine if a Martian showed up, all big ears and big nose like a child’s drawing, and he asked to be baptized. How would you react?” The point he was making is that everyone has the “right” to receive the Holy Spirit—even if, as in the case of scary green creatures from outer space—they seem quite different from us.

Imagine that the Mars Rover, NASA’s automated motor vehicle that propels itself across the surface of the planet, encountered real live beings on its route. American scientists would have some difficult decisions, such as whether to invite the spacemen back to our planet for a visit. But the Catholic Church, for its part, stands ready to welcome the stranger—and to make him feel right at home.

October 2, 2015
Vatican Now Distancing Itself from Kim Davis?
Next Post

October 3, 2015 Happening Now: Join in the Prayer Vigil for the Synod
Recent Comments
1 Comment | Leave a Comment
Browse Our Archives
get the latest from
Catholic
Sign up for our newsletter
POPULAR AT PATHEOS Catholic
1

From Founding a Startup to Deloitte...
Through Catholic Lenses
Related posts from Seasons of Grace