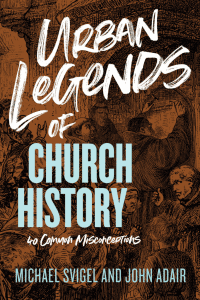 Nerd alert: History is fun! My History of Christian Thought class at LSU stands out as one of my top 3 classes there. At seminary, I took all the church history classes I could fit into my program. Combine all of that with a myth-busting formula, it’s no wonder I jumped at the chance to read this new book, Urban Legends of Church History: 40 Common Misconceptions.

Both authors are professors at my alma mater, Dallas Theological Seminary (and one of them was my classmate many years ago). They were kind enough to answer a few questions about the book.

By writing a myth-busting book, you are guaranteed to step on toes and invite hate mail. Why did you do it?

Yes, we expect we’ll step on some toes—but probably with equal pressure across denominations and traditions (our own included)! We like to say that history is a stubborn thing—it doesn’t like to change. So, we try to let the history itself do the offending. Hopefully, we present the myth-busting with enough facts, finesse, and footnotes so the people whose toes get stepped on will realize it’s because they had stepped across the line. Maybe instead of hate mail, they’ll thank us!

Why did we write it? This book is actually the third in a series by B&H, which started with Urban Legends of the New Testament by David A. Croteau (2015) and Urban Legends of the Old Testament by David A. Croteau and Gary E. Yates (2019). Some years ago, I (Svigel) wrote a blog post correcting the top ten myths of church history, and I had even put together a preliminary proposal for a book-length treatment of some of these. But I put it in deep freeze as I worked on other projects. In God’s providence, though, David Croteau approached me at a conference and asked if I’d like to do the Urban Legends of Church History volume for the series. It all came together when my friend and colleague, John Adair, agreed to work with me on the book.

As seminary professors, what sort of historical awareness have you seen through the years? Which urban legend surprised you the most?

We teach at an interdenominational seminary with a lot of free church, Bible church, and evangelical students. Though students have a lot of interest in church history, oftentimes it seems to many that evangelical church history is the study of how everybody misinterpreted the Bible until we came along! The lack of a broad and deep knowledge of the history of the church—the good, the bad, and the ugly—does leave a vacuum often filled with myths, legends, or misunderstandings. Hence this book—it not only corrects the errors and inaccuracies, but it also presents what we believe is a better picture of the history of the church.

Probably the most surprising urban legend of church history, given our tradition’s great regard for the Bible, is the confusion about the canonization of the New Testament. We’re constantly bumping into believers who believe the Da Vinci Code narrative that some church council, Pope, or emperor chose which books to include in the Bible and which to set aside—centuries after the books were written. When we show that the bulk of Old and New Testament books had been simply received as canonical and authoritative from the start and that only a handful were disputed by some, it’s often an eye-opener for a lot of our students. But it’s really an important issue for those of us who have a very high regard for the authority of Scripture as the final authority in matters of faith and practice.

September 28, 2020
Marriage: A Covenant of Partnership or Power?
Next Post

October 13, 2020 What Amy Coney Barrett and I Have in Common
Recent Comments
0 | Leave a Comment
"What a fantastic opening for open relaxed family conversation about these matters. As a mum ..."
Kathryn Farrell Did He Really Just Ask That ..."
"Misty,What a thought-provoking poem about this past year. It captures so many of the thoughts ..."
Christine Langford 2020: A Poem
"Thank you sincerely for this. I will continue to work toward learning in this. Your ..."
JustinTBC Why ‘All Lives Matter’ Misses the ..."
"Kelley, thank you so much for this wonderful review! I so appreciate it!"
Glenys Nellist Read This Book: ‘Little Mole Finds ..."
Browse Our Archives
get the latest from
Kelley Mathews
Sign up for our newsletter
POPULAR AT PATHEOS Family
1

5 Tips for to Help Your Children Become...
Many studies show that being raised in a high-conflict divorced family can cause children...
view all Family blogs
What Are Your Thoughts?leave a comment
Copyright 2008-2021, Patheos. All rights reserved.
error: Content is protected !!