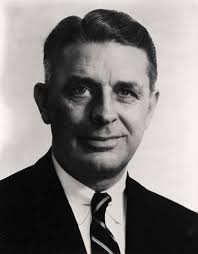 Joseph C. Dey, Jr., (1907-1991, pronounced “die”) was born in Norfolk, Virginia. He grew up in New Orleans, Louisiana. After graduating with a degree in journalism from the University of Pennsylvania, Joe first worked as a sportswriter in Philadelphia. Then he served as the executive director of the USGA for the next thirty-five years, from 1934 to 1969. During that time, no one in golf had a better reputation for personal integrity and upholding the integrity of the game of golf than did Joe Dey.

Joe Dey was a handsome, distinguished looking gentleman about six feet tall and with slightly graying hair when I knew him. He talked like a judge and looked like a judge. In the U.S., Mr. Dey knew the rules of golf better than anyone, thus including the PGA Tour pros and any of the PGA Tour rules officials. Everyone regarded Joe Dey as the ultimate referee for rules decisions in our game. He became known as “Mr. Rules of Golf.” Joe Dey was such an appropriate, gentlemanly fellow to serve as the top rules official in “the gentleman’s game.”

In Adam Schupak’s book, Deane Beman: The Driving Force (2011), he relates that 13-year old Jack Nicklaus was almost late to his 7:00 o’clock starting time in the 1953 match-play U.S. Junior Amateur Championship in Tulsa, Oklahoma. Joe Dey was there at the first tee when it happened. Schupak quotes Nicklaus, saying, “‘Joe Dey gave me a good lacing down,’ Nicklaus recalled. “‘“Young man, 30 seconds later and you’d be starting at the second tee 1 down,” and so on. That was my introduction to Joe Dey. I was a 13-year old kid mind you, and that made me remember him pretty well’” (p. 35). Adam continues quoting Jack, “‘Joe was in many ways like a second or third father to me,’ Nicklaus said. ‘From the moment I met him I could tell he was in charge of the game of golf. Every time I had a question or a problem about what was right, I always picked up the phone and placed a call to Joe. I knew I would always get the right answer, whether it was what I wanted to hear or not’” (p. 37). Nicklaus eulogized Dey, saying, “Outside of my father and (instructor) Jack Grout, Joe Dey was the most influential person in my life” (p. 48).

One year during the first round of the Bing Crosby Clambake Pro-Am, which was always held in Monterey, California, I was playing the par-four fourteenth hole at the beautiful, famed Cypress Point Golf Club that lies alongside the Pacific Ocean. (I don’t recall what year it was, but Joe Dey was the Tour commissioner.) My second shot barely missed the right side of the green and kicked hard right. After I pitched my third shot onto the green, a spectator told me that a few minutes earlier a golf fan had parked his car on the grass nearby, to which he pointed. The guy explained that before the driver did that, he got out of his car, pulled up an out-of-bounds stake, tossed it well to the side, and parked his car right where that stake had been stuck in the ground. This spectator then added, “If you had hit your ball here thirty minutes ago, you would have been out-of-bounds.” Although that might sound funny to some folks, it didn’t make me a happy camper.

I promptly had to stop play and “call for a ruling.” Our rules official Steve Shaballa appeared and directed me to finish the hole with my original ball, which I one-putted for a four. In unusual situations, golf rules officials sometimes require that the player play two balls. So, Steve then had me go back to the place in the fairway where I had played my second shot, play a second ball from there and finish the hole with it. I did and made a five with that second ball. Steve then ruled this second ball as my real score. But he then added two penalty strokes for my ball being out-of-bounds, giving me a seven as my official score on the hole.

I objected and asked for a second opinion from his boss—our PGA Tour tournament director Jack Tuthill. That’s the only time I ever did that in my golf career. When I completed that round, Jack declared that Steve’s ruling was correct. I complained that that was unfair since there weren’t any out-of-bounds stakes for me to know that my ball was out-of-bounds. So, I asked Jack Tuthill to phone Joe Dey and ask him if he thought that was the proper ruling in that situation.

Friday and Saturday went by, and I wasn’t getting an answer to my question. But when I arrived at Pebble Beach Golf Links Sunday morning, where we always played that final round of the Crosby tournament, Jack Tuthill came to me and said that Joe Dey ruled this morning that my official score on the fourteenth hole on Thursday was the four I made with the first ball. Jack said Joe explained that because of the situation he was invoking “the rule of equity.” I never even knew there was such a rule, and none of the other Touring pros I talked to knew about it either. I think Jack said it was in what was called “the big black book.” That book consisted of a record of golf rulings made over many years that addressed all kinds of strange and weird situations that can happen in our most beloved game. I never heard of any other Touring pro getting “the rule of equity” invoked for him. I say it was absolute justice, but some say it was pure grace.

In 1969, Joe Dey was asked to become the PGA Tour’s first commissioner. Many golfers, especially officials in the USGA, were surprised he accepted this offer. For a long time there had been some tension in the relationship between the USGA, which was considered the watchdog for keeping the amateur ranks free of filthy lucre, and the PGA Tour, which was trying to commercialize the game.

So, Joe Dey jumped ship and ran the PGA Tour for a five-year term, from 1969 to 1974. His presence on the PGA Tour as its commissioner seemed to simmer the raging fires that had been blazing out of control between the PGA Tour and the PGA of America. (See the post “The Short-lived Association of Professional Golfers.” At that time, the PGA Tour was called the Tournament Players Division within the PGA of America.) They had settled their dispute and arrived at an agreeable formula for allowing a few local club pros to enter and compete in PGA Tour tournaments.

At the end of Joe Dey’s five-year tenure as the PGA Tour’s commissioner, he retired. Joe had devoted forty years of his life to being sort of a CEO of two of the three premier organizations in American golf—one in amateur golf and the other in professional golf. The PGA Tour conducted a nice celebration in Joe’s behalf. I attended the affair. Just prior to the banquet commenced, Joe and I were talking privately. He divulged to me that he was nervous at being honored that evening. As if quoting from the Rules of Golf, Joe quoted Jesus from the New Testament wherein he said to his disciples concerning some self-righteous Pharisees, “Beware when all men speak well of you.” I was impressed with this humility and that Joe knew his Bible.

As both executive director of the USGA and commissioner of the PGA Tour, Joe Dey often wore a dark blue blazer coat if weather permitted. It seemed fitting for this true gentleman. And those who knew Joe Dey well knew that he always carried two small books in the two inside pockets of his blazer: the Rules of Golf and a New Testament.

Yes, Joe Dey was a Christian man. He once told me something that few people in our world of golf knew about him. It was that for many years he was a member of the board of Union Seminary in New York City. That is one of the oldest, most prestigious theological seminaries in the U.S. Except for the Library of Congress, I think it used to possess the largest theological library in the U.S.

One time, Joe Dey said something to me that was profoundly theological. During the early 1970s, PGA Tour pro Bruce Crampton, a former Australian, was ranked among the top five pro golfers in the world. He won fourteen tournaments on the PGA Tour, but he never won a major championship. Coincidentally, Crampton was runner-up in four majors, from 1972 through 1975, and Jack Nicklaus won all four of those. Crampton, immediately after one of those losses, told the media that winning golf tournaments was “fate,” that is, it was predetermined. That got reporters’ attention. They soon asked Jack Nicklaus about that, and he said “you have to make it happen.” These certainly were two opposite philosophies about winning in sports, if not being successful at life in general.

The next morning, I read this in the newspaper as I was leaving that tournament and flying home. In the airport I ran into Joe Dey, who was then our commissioner. I mentioned these remarks by Crampton and Nicklaus and asked Joe what he thought about it. I may have mentioned to him that in the PGA Tour Bible Study, this was a most pressing question which attending Tour pros through the years would ask: “Does God hit the golf ball or does it only have to do with you?” To many folks, this question probably seems bazaar. Yet, it relates to an important theological issue called “predestination,” a word that is in the Bible. I thought Joe’s answer was most profound. He said, “I don’t think God is much interested in who wins golf tournaments. But he is most interested in how people live their lives.” I thought, “credit another mark for Mr. Rules of Golf, the greatest judge in golf.”

November 14, 2013
Since God Almighty Is Invisible, Jesus Being God Is Impossible
Next Post

November 21, 2013 What Are the Claims of Christ?
Recent Comments
0 | Leave a Comment
Browse Our Archives
get the latest from
Kermit Zarley Blog
Sign up for our newsletter
POPULAR AT PATHEOS Progressive Christian
1

Evangelicals, you have some denouncing to...
Grace-Colored Glasses
Related posts from Kermit Zarley Blog 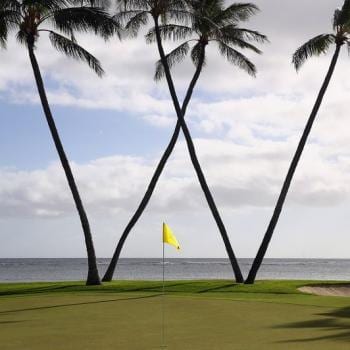 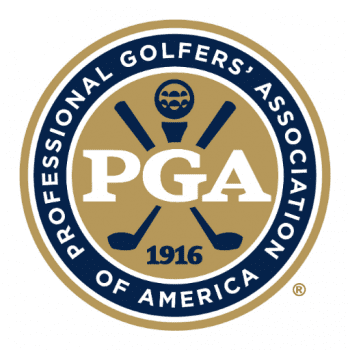 Progressive Christian
The PGA of America Pulls the Plug on...
Kermit Zarley Blog 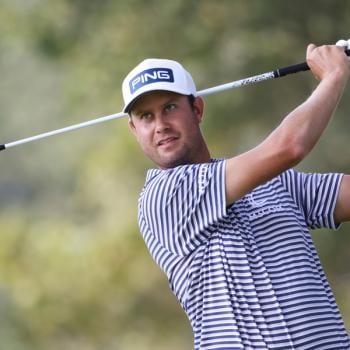 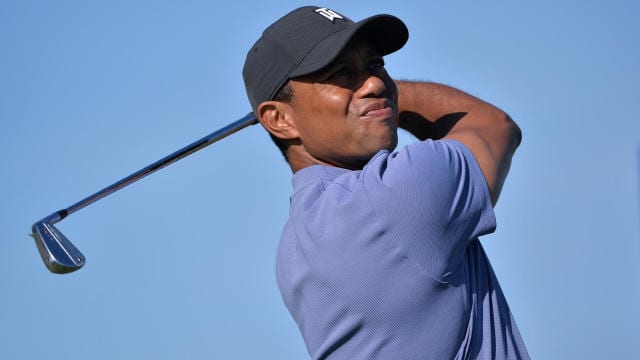