Copts Need to Get It Right about Jesus

In the past almost six months, ISIS has conducted four massacres in Egypt against innocent Coptic Christians, resulting in over 100 deaths. In the first such assault, on December 11, a Coptic church was bombed, resulting in 24 casualties. Most recently, on May 25, ISIS ambushed a Coptic church bus convoy, killing 30. Those terrorists stopped the convoy in the desert and told its riders to switch their religion to Islam or die. Obviously, they refused and became martyrs of Christianity.

Since 2013, when Muslim Mohamed Morsi was removed as president of Egypt, dozens of Coptic churches have been bombed, usually when parishioners were attending a worship service. Morsi was a leader of the Muslim Brotherhood, and it has condemned these ISIS bombings. Egypt is practically under siege by such Muslim radicals. Several times in the past few years, I’ve posted about this happening in Egypt’s Northern Sinai.

Egyptians overwhelming support current President El-Sisi, a former military general who is Muslim. Sisi does not tolerate persecution of Christians and thus affirms religious liberty for all Egyptians. He seems to think the Qur’an is partly to blame for this terrorism. He therefore implicitly has called for a revision of the Qur’an regarding its texts which clearly advocate violence against non-Muslim religious people. Also, see my post, “Are Muslims Being Radicalized with the Qur’an?” This subject about the Qur’an is being discussed by Muslim scholars, at least in Egypt, at the highest levels.

Egyptian, Coptic clergymen generally are calling their parishioners to not retaliate violently regarding these ISIS attacks. Some claim Copts forgiving such terrorists is having a positive impact on Muslims respecting Christianity.

On the other hand, regarding the most recent assault, thousands of Copts reportedly attended funeral services in protest. They chanted, “We will avenge them or die like them.” They also chanted in opposition to Islam’s creed, “There is no god but God, and the Messiah, he is God.”

In my opinion, that last clause–which means Jesus is God–is unbiblical. It has been the primary, theological roadblock established by Christians that divides them from Muslims. The Qur’an constantly, and rightly so, denounces the Christian teaching that God is a Trinity of divine persons and that Jesus therefore is divine and/or God. On the Muslim side, the primary roadblock they establish with Christianity is that Jesus is not God’s Son and was not crucified. Now, Coptic Christians saying Jesus is God did not originate with them but long ago with church fathers, thus before Islam ever existed.

Coptic Christianity claims a most intriguing origin as the oldest church denomination in the world. It traces its beginning to the Ethiopian eunuch mentioned in the book of Acts in the New Testament. Luke, who wrote the Gospel of Luke, also wrote the book of Acts. In it, Luke relates that he accompanied Paul on some of his missionary journeys.

Luke tells about Philip, who was not an apostle, preaching the gospel in Samaria with blessed results (Acts 8.1-25). Then we read in the NRSV, “Then an angel of the Lord said to Philip, ‘Get up and go toward the south to the road that goes down from Jerusalem to Gaza.’ (This is a wilderness road.) So he got up and went. Now there was an Ethiopian eunuch, a court official of the Candace, queen of the Ethiopians, in charge of her entire treasury. He had come to Jerusalem to worship and was returning home; seated in his chariot, he was reading the prophet Isaiah. Then the Spirit said to Philip, ‘Go over to this chariot and join it.’ So Philip ran up to it and heard him reading the prophet Isaiah. He asked, ‘Do you understand what you are reading?’ He replied, ‘How can I, unless someone guides me?’ And he invited Philip to get in and sit beside him” (vv. 26-31).

This man was reading Isaiah 53, about God’s righteous, suffering servant being killed like a sheep being slaughtered (Acts 8.32-33). We read next in Acts, “Then Philip began to speak, and starting with this scripture, he proclaimed to him the good news about Jesus. As they were going along the road, they came to some water; and the eunuch said, ‘Look, here is water! What is to prevent me from being baptized?’ He commanded the chariot to stop, and both of them, Philip and the eunuch, went down into the water, and Philip baptized him. When they came up out of the water,… the eunuch … went on his way rejoicing” (vv. 35-39). Copts claim their faith originated with this Ethiopian.

Today, Ethiopia is located south of Egypt. These two countries in Northeast Africa are separated by a portion of the nation of Sudan. Coptic Christianity is most prevalent in Northeast Africa. Copts are the largest Christian group in Egypt, Libya, and Sudan. In Egypt, Copts represent 10% of the population. Ethiopia likely is the oldest nation in the world–more than Armenia that makes this claim–to have accepted Christianity, which was in the first century. Ethiopia has several branches of Christianity that are quite old.

The viewpoint that Jesus is God cannot be linked to the earliest Christianity in Ethiopia or in all of Northeast Africa. The earliest extant patristic writings that clearly identify Jesus as being God are the seven epistles of Ignatius that he wrote in about 110 A.D as he was being taken as a captive to be executed at Rome. Ignatius claimed to be the bishop of Antioch, Syria. That city had soon become the second earliest center of Christian faith, with Jerusalem being first.

However, it is anachronistic to call the earliest believers in Jerusalem “Christians.” The book of Acts identifies those Jewish believers only as “Nazarenes,” meaning followers of Jesus who was called a “Nazarene” by both his apostles and enemies (Ac 2.22; 3.6; 4.10; 6.14). So, applying the word “Nazarene(s) to either Jesus or his Jewish disciples should not be deemed pejorative. Even the risen Jesus said to Saul/Paul, “I am Jesus the Nazarene” (Ac 22.8). On the other hand, the believers in Antioch, which apparently very early consisted of both Jews and Gentiles, were the first to be called “Christian(s)” (Ac 11.26; 26.28). And the faith is repeatedly called in Acts “the way” (Ac 9.2; 19.9, 23; 22.4; 24.14, 22) and once “the sect of the Nazarene” (Ac 24.5). Apparently, in time the word “Christian” was applied to both Jewish and Gentile believers (1 Peter 4.16).

In extant patristic literature produced in North Africa, I think Jesus is first identified as God by Tertullian. (But I stand to be corrected on this.) Tertullian does so especially in his hersiology book Against Praxeas, which is preeminent among his several extant books. Tertullian is attributed as the first to use the word “trinity,” actually trinitas (the Latin word for “trinity” since he wrote mostly in Latin), in reference to God. Thus, Tertullian is credited as the first to develop a, not the, doctrine of the Trinity. That is, it was not the so-called orthodox doctrine that the Catholic Church later made official in 381.

Tertullian taught that God is the Father and that he, the Son, Jesus, and the Holy Spirit (who is prosopon, meaning person) are all three divine and together make a trinitas, which is the Latin word for “trinity.” Yet Tertullian viewed the divinity of the Father as being greater than that of both the Son and the Spirit. So, he viewed the divinity of these three in descending order, respectively. Thus, Tertullian believed in essential subordination of the Son to the Father. Tertullian also did not believe the Logos-Son preexisted for all eternity.

In contrast, the later, official church doctrine of the Trinity, which remains supreme today among almost all Christians, is that God is a Trinity of three co-equal and co-eternal persons: Father, Son, and Holy Spirit. Thus, most Christians speak of “the triune God,” with which Tertullian certainly would disagree. That is why Arius in the fourth century could rightly cited Tertullian in support of Arius’ view that “there was a time when the Logos-Son did not exist.” 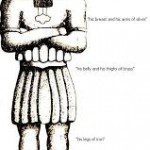 June 1, 2017
Will Terrorism Factor in Daniel's Last World Empire Made of Iron?
Next Post