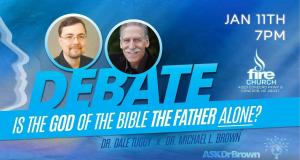 On January 11, 2019, Dr. Michael Brown and Dr. Dale Tuggy spent nearly two hours debating the question, “Is the God of the Bible the Father Alone?” Then there was Q&A with the audience for almost an hour regarding this Trinity Debate.

Dale Tuggy is a friend of mine. We believe alike on this question–that the God of the Bible is indeed the Father alone. Our #1 Bible text for this is Jesus’ saying in his so-called High Priestly prayer right before his capture, interrogation, condemnation, and crucifixion: “Father, . . . this is eternal life, that they may know you, the only true God, and Jesus Christ whom you have sent” (John 17.1, 3).

So, Dale and I believe God is a single person, thus not a triune personality as the institutional church teaches with its doctrine of the Trinity. Thus, we believe Jesus was a man and not God. Both of were taught the doctrine of the Trinity many years ago in our churches. Over time, we both came to the conclusion, before we ever knew each other, that the Trinity doctrine is not a biblical teaching. I guess we have two minor differences about this.

Concerning John 10.33-36 (NRSV), Jesus’ Jewish opponents accused him of “‘making yourself God.’ Jesus answered, ‘Is it not written in your law, “I said, you are gods”? If those to whom the word of God came were called “gods”–and the scripture cannot be annulled–can you say that the one whom the Father has sanctified and sent into the world is blaspheming because I said, “I am God’s Son”?”‘ So, Jesus says no more about himself here than what he has been saying occasionally, that he is the Son of God. This is indicated automatically whenever he calls God his “Father.” For more click here.

In Jn 10.34, Jesus cited Psalm 82.6. God therein says concerning Israel’s judges, who were men, “I say, ‘you are gods, children of the Most High, all of you; nevertheless, you shall die like mortals.'” Verse 1 establishes the identity of those to whom God is speaking, here. Many contemporary scholars believe it was angels, which they often call “gods.” However, I like the NASB rendering of Ps 82.1, “God takes his stand in His own congregation [referring to Israel]; He judges in the midst of the rulers.”

In the Hebrew text (Masoretic Text=MT) of Ps 82.6, the word here translated “gods” in most versions is the usual word used for “God/God/gods, which is elohim. In other texts, the MT sometimes applies elohim to angels, men, and the king of Israel. Here, I believe the author, Asaph, refers to the rulers/judges of Israel and not God’s heavenly council of angels, as some scholars suppose. So, I do not think Asaph intended to identify these rulers of Israel as “gods” in sense that we English speakers use that word. Rather, elohim and el, its shortened form, can mean “strong one” or “strong ones” or the like. El is often used in ancient Semitic languages to mean “strong” or “mighty.” For instance, Isa 9.6 calls Messiah el gibbor, which I think should be translated “mighty one” or “mighty warrior,” rather than the common rendering by English Bibles here, which is “Mighty God.” For more on this click here.

For example, the foremost Old Testament lexicon, Brown-Driver-Briggs (p. 43), has four categories for elohim. The first category says, “a. rulers, judges either as divine representatives at sacred places or as reflecting divine majesty and power.” Of course, this can be men. It also says elohim is sometimes applied to “angels.”

Then there is the Apostle Thomas’ confession in John 20.28: “my Lord and my God.” I believe Thomas did not mean to identify Jesus as “God” but that it was a recognition of God dwelling in Jesus, just as Jesus had taught Thomas days earlier, in John 14.1-11. For more on this click here.

As for the other issue, Dale said something in the debate that caused me to think he said Jesus preexisted. I don’t think that’s what Dale meant. That subject can involve some nuances, especially due to the logos teaching in the Gospel of John. I don’t believe John meant the logos as a personal being. And regarding such texts as Jesus “coming down from heaven,” in John 6, I think John meant that metaphorically, just as he most certainly did about the drinking his blood and eating his flesh.

Michael Brown is a very experienced public speaker and debater. He is particularly skilled at debating this subject since he has done it a lot. To me, he is such an anomaly. Michael Brown is Jewish; yet, as a Jewish Christian he believes God is three persons. In contrast, Dale and I are Gentiles, yet we believe like religious Jews, that God is a single person. Maybe you could say Dale and I are anomalies also.

In this debate between Dale Tuggy and Michael Brown, I thought Dale was easier to listen to. But his presentation would have been better if he had used more scripture. Dale is a Christian philosopher who is especially skilled at presenting arguments, perhaps more so than being a Bible expositor.

Michael Brown just flat threw the whole kitchen sink at Dale and therefore listeners. I mean he talked a mile-a-minute and used so many scriptures and arguments that you couldn’t possibly take notes. I thought it was overwhelming. As a former Trinitarian for 22 years, I believe Tuggy’s position is convincing and Brown’s is not.

For Christians, discussing or debating this subject is more important than any other. So, it is worth the time to listen to this debate.

January 19, 2019 God Gives His Glory "to no other" than his Righteous Servant
Recent Comments
0 | Leave a Comment
Browse Our Archives
get the latest from
Kermit Zarley Blog
Sign up for our newsletter
POPULAR AT PATHEOS Progressive Christian
1