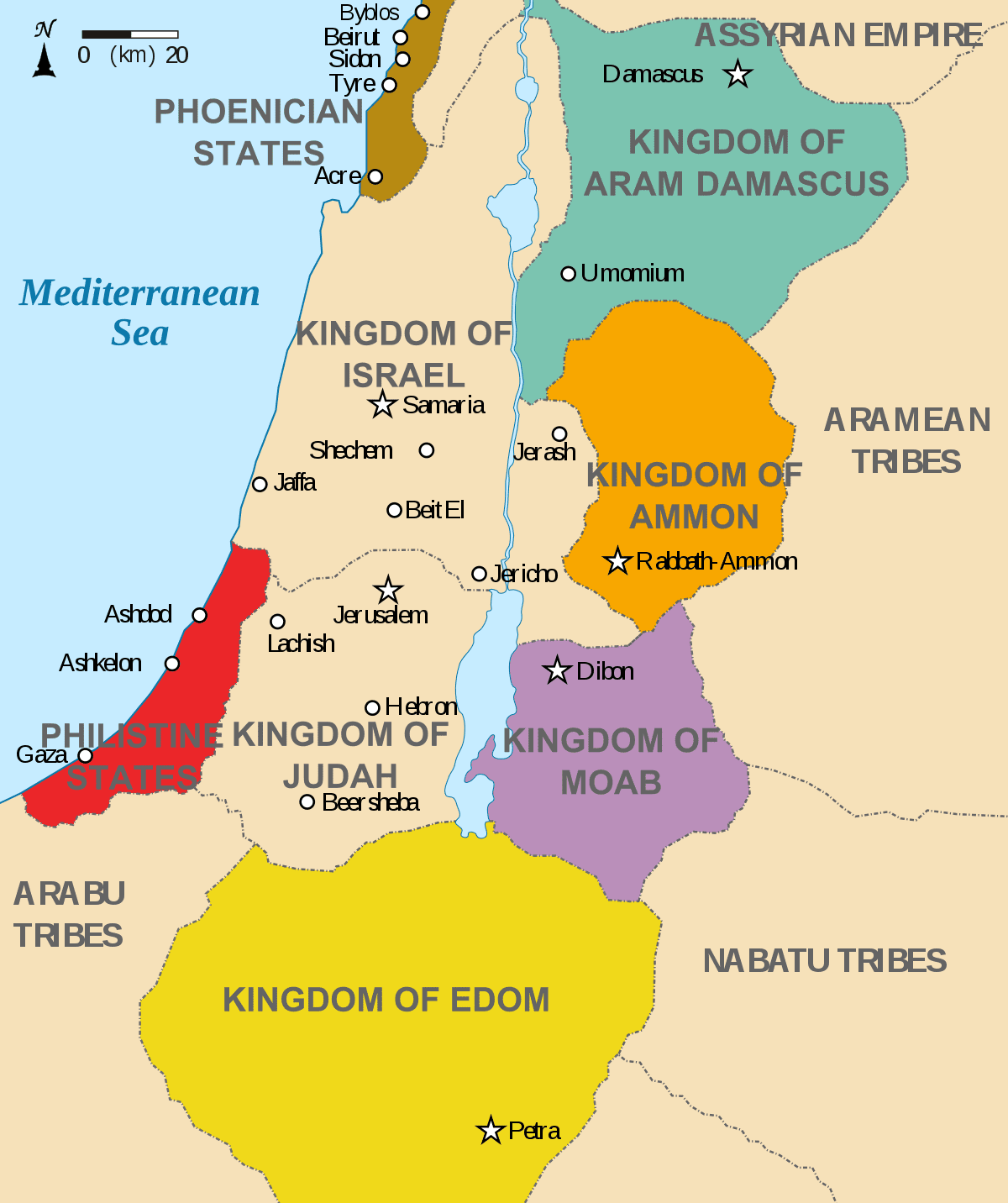 Archaeologists have discovered the famous copper mines of Edom, proving the Bible right. Professor Erez Ben-Yosef of Tel Aviv University’s Department of Archaeology and Ancient Near Eastern Cultures and Professor Tom Levy of the University of California, San Diego, USA, have just revealed the results of their Central Valley Timna Project at the Timna site in Israel and the nearby Faynan site in Jordan. Their archaeological team discovered substantial deposits of copper slag indicating that the civilization of Edom existed there and that it had a thriving copper industry from about 1,300 to 800 BCE.

The Bible’s book of Genesis tells about Abram/Abraham, Isaac, and Jacob–the three eldest patriarchs of the Hebrew people (Genesis 11.26–25.26). Jacob had a twin brother named Essau. He actually was born only seconds before Jacob, making Essau the eldest (Gen 25.26). Then the Bible says, “Essau was a skillful hunter, a man of the field, while Jacob was a quiet man, living in tents” (v. 27). Essau came in from the field hungry one day and foolishly sold his birthright to Jacob for a pot of stew (vv. 29-34).

Jacob became the son of the covenant God made with Abraham and his descendants. And they got Jacob’s wife Rebekah from their own people. In contrast, “Essau took his wives from the Canaanites” (Gen 36.2). The Bible then begins a list of Essau’s progeny by saying, “These are the descendants of Essau (that is, Edom)” (Gen 36.1). So, Essau’s descendants were called Edom or Edomites. They established a significant kingdom in today’s southeastern Negev in Israel and southwestern Jordan. The Bible introduces a list of Edom’s kings by saying, “These are the kings who reigned in the land of Edom, before any king reigned over the Israelites” (v. 31). And among Edom’s clans that are enumerated, Timna is mentioned first (v. 40).

Professors Ben-Yosef and Levy have published their findings in the archaeological journal PLOS One. They explain that due to Edom’s abundant supply of copper ore, Egyptian pharaohs had a major influence in turning the kingdom of Edom into “a copper powerhouse.” Copper was the most important metal in the ancient world for making tools. Copper was a necessary element in the making of bronze, which is stronger than copper. The Bronze Age preceded the Iron Age, which began in about 1,200 BCE.

Before the Hebrews ever entered the Promised Land, Moses told them that it was “a land where you may eat bread without scarcity, where you will lack nothing, a land whose stones are iron and from whose hills you may mine copper” (Deuteronomy 8.9). It is believed that Israel’s King Solomon extracted large amounts of copper from mines in or near the region of this archaeological dig by these two  professors.

Until their discovery, archaeologists and historians had thought that the Kingdom of Edom and its copper industry did not begin to exist until hundreds of years later than the Bible relates. Ben-Yosef relates, “We were able to identify and characterize the emergence of the biblical kingdom of Edom. Our results prove it happened earlier than previously thought and in accordance with the biblical description.”

In my book, Palestine Is Coming: The Revival of Ancient Philistia (1990), the main biblical text I cite to support my biblical interpretation that today’s Palestinians have a stronger genetic link to the ancient Philistines and that the Bible indicates the Palestinians will get their own state in the coastal region which was Philistia, is Isaiah 11.14. To understand this text, you must first understand all of what precedes it in Isaiah 11.

Isaiah 11 has been understood by both Jews and Christians as a messianic text. It begins by saying, “A shoot shall come out from the stump of Jesse, and a branch shall grow out of his roots” (Isaiah 11.1). Jesse was the name of King David’s father. The Bible often indicates that the one-of-a-kind Messiah (Anointed One), whom God promises to the Israelites, will come through the line of David. Thus, the Messiah is called “the son of David.” And “branch” is a metaphor for this Messiah in both the books of Isaiah and Jeremiah.

Then Isaiah predicts concerning this branch (descendant) of Jesse, “he shall strike the earth with the rod of his mouth, and with the breath of his lips he shall kill the wicked” (v. 4). The Septuagint–the third century BCE translation of the Hebrew Bible into Greek–translates “wicked” as “wicked one.” The Apostle Paul alludes to this text by writing concerning the yet future Antichrist, “And then the lawless one will be revealed, whom the Lord Jesus will destroy with the breath of his mouth, annihilating him by the manifestation of his coming” (2 Thessalonians 2.8).

After this happens, Isaiah further predicts, “The wolf shall live with the lamb, the leopard shall lie down with the kid, the calf and the lion and the fatling together, and a little child shall lead them” (Isa 11.6). The prophet continues describing what is called the messianic kingdom and what Jesus called “the world to come.”

The biblical prophets prophesied thematically in their writings way more than chronologically. Thus, Isaiah later returns to his theme of the Messianic Destruction by saying of the Jews who will join the Messiah in battling their enemies, “But they shall swoop down on the backs of the Philistines in the west, together they shall plunder the people of the east. The shall put forth their hand against Edom and Moab, and the Ammonites shall obey them” (Isaiah 11.14). Thus, Isaiah refers to the enemies living to the west of the nation of Israel as Philistines, and he refers to Israel’s enemies living directly to east as Edom, Moab, and the Ammonites.

So, I interpret in my Palestine Is Coming book, published almost thirty years ago, that these “Philistines” refer to modern Palestinians. Now, to be consistent in interpretation, if I’m going to interpret “Philistines” as Palestinians, should I not also interpret “Edom, Moab, and the Ammonites” as descendants of these ancients as well? I do not say this in my Palestine book, but I have at least one chapter on this subject in my next Still Here book (Book 3), which I expect to be published next year. In this book, I claim the Bible indicates that at the end of the age, many peoples living in The Levant will be to some extend descendants of their ancient forebears. I believe this will be true of “Edom, Moab, and the Ammonites” mentioned in Isaiah 11.14.

Most people push back on me about this biblical interpretation. But I said in my Still Here Book 1 that the end of the age, and thus the simultaneous second coming of Christ, will not happen for at least a couple of generations. I say it will occur between the years 2070 and 2250. But in my next book, I narrow those parameters slightly, extending beyond the year 2070. The reason for this is that many unfulfilled prophecies in the Bible about the end times will take a substantial amount of time to develop.

One these phenomenon indicated in the Bible is this transfer of people to live where their forebears lived. For this to happen, DNA must be able to trace people’s ancestry back thousands of years. So, I believe that will happen so that many people who have a significant genetic link to the ancient Edomites, Moabites, and Ammonites will settle in their ancestral lands. And this archaeological discovery about the ancient Kingdom of Edom by professors Ben-Yosef and Levy and their team will contribute to establishing the exact location where these descendants of the Edomites will live in the future.

September 20, 2019
Trump Is a Bozo about Climate Change
Next Post

September 25, 2019 IMPEACHMENT--This Time It's Serious
Recent Comments
0 | Leave a Comment
"Sarai Becerra: "Why the change? Could it be that the name of the Father, the ..."
Debunker Can Genuine Christians Be Trinitarian or ..."
"I am not trying to prove to you or anyone the efficacy of Hydroxy. Wait ..."
Bob Shiloh Trump Believes in Kook African Preacher-Woman ..."
"Nica, I replied but it is in "approval mode.""
Bob Shiloh Goodreads Bogus Review of Warrior from ..."
"Why is it important to me? I should think that all responsible citizens expect their ..."
Nica Trump Believes in Kook African Preacher-Woman ..."
Browse Our Archives
get the latest from
Kermit Zarley Blog
Sign up for our newsletter
POPULAR AT PATHEOS Progressive Christian
1