Straight Left Arm at Impact Is Not a Golf Myth 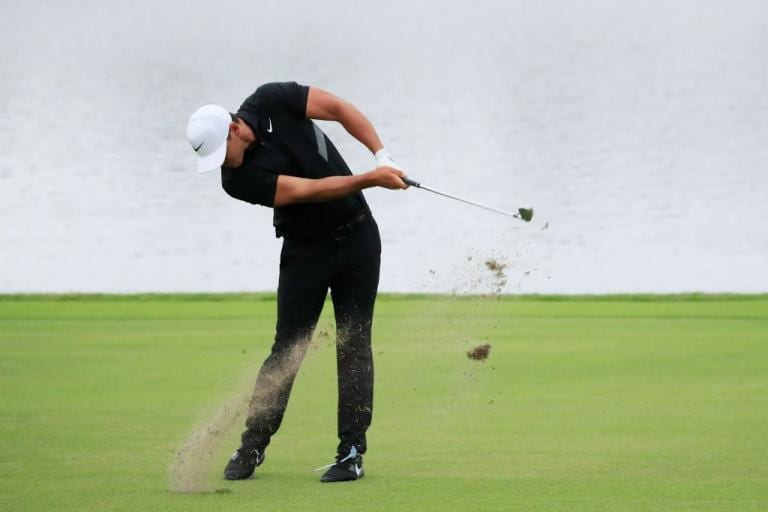 Golf.com has an article today that is written by PGA (not PGA Tour) golf swing instructor Baden Schaff entitled “Teacher: Why keeping your arms straight is one of the biggest myths in golf.” He writes, “One of the most common concepts I hear and see is ‘make sure you keep your arms straight!’ But this can actually be quite a dangerous concept: Straight arms can often lead to loss of power, over-active wrists and an over-active body.” I think that’s all bogus!

First of all, Schaff is unclear. He seems to mean keeping both arms straight at impact. But that’s not what he says. A golf novice could think he means to keep both arms straight throughout the entire swing. My dear friend, Karsten Solheim–owner and founder of PING who is now deceased–actually believed in that type of swing. I used to laugh watching him swing almost his entire swing with straight arms. He only bent his right arm a little on his backswing and then finished his swing with both arms straight and pointing up to the sky.

Second, Schaff posits a straw man argument by saying, “keeping your arms straight is one of the biggest myths in golf,” that is, if he means at impact. What many outstanding golf swing instructors have taught is, for right-handed golfers, to keep the left arm straight at impact. Most pros on the PGA Tour do that while their right arm is usually bent slightly at impact.

Schaff tries to prove his point by citing other sports. He says tennis players, shot putters, javelin throwers, football quarterbacks, and boxers don’t make their motion “with straight arms.” Of course not! With some exception with tennis players, they all make their action with ONE ARM, not two!

Schaff goes from bad to worse in his argument. He asserts, “You don’t arm wrestle with a straight arm.” Excuse me! Wrestling is irrelevant to golf. Then he states, “at impact your right arm should feel exactly the same way [as in wrestling], bent at almost 45 degrees.” No way hosea!

Schaff cites my friend, TV golf commentator, swing analyst, and former PGA Tour player Brandel Chamblee, about this. I don’t know what Brandel says about this. But Schaff seems to claim Brandel says a golfer with shorter arms has more leverage and power than a golfer with longer arms. I disagree with that as well. Brandel and I have talked about the golf swing before, with him asking me some questions about it.

Ben Hogan (5′ 8-9″ tall) and Gary Player (5′ 6″ tall) were two of the greatest golfers to ever play the game. Both men had long arms for their short height. I think my friend Gary has told me it helped him having longer arms. Another South African who played the PGA Tour, Bobby Cole, had very long arms for his height, and everybody always said it helped him hit it long. My friend George Archer, the tallest great player to play the PGA Tour in my day, used to always say that someday a guy seven feet tall with long arms was going to play the PGA Tour and drive the par fives.

Now, in this article by Baden Schaff there is a photo of PGA Tour Brooks Koepka to prove Schaff’s point. But the photo is misleading. Koepka is the hottest player in pro golf, winning four majors in the last three years and being chosen Player of the Year this year. In this photo, Koepka is hitting an iron shot, his hands and club are waist-high into his follow through, and his left arm is severely bent. Koepka obviously took a huge divot on that shot. Koepka is what you call “a digger” as opposed to “a sweeper.” That is, he hits his iron shots with more of a descending blow to the ball than most players do. When you do that, as Koepka did on this shot, you usually take more divot and it can cause your left arm to bend more after you hit the ball than the left arm does at impact.

However, I need to explain something else about Koepka’s swing. He has what is called a “shut-to-open swing” or “closed-to-open swing.” That means he closes the club face very noticeably on his backswing and “blocks” the shot on his follow through, thus restricting the club face from rotating as much on the follow through as most players do. If Koepka didn’t block somewhat on his follow through, he’d be hunting for his pellet all day long in the left weeds! That is, blocking is an effort to keep from hooking which is caused by a closed club face in the backswing.

It is indeed a myth, however, about the necessity of having a straight left arm at the top of the backswing. Many great pros have proved this a fallacy. Curtis Strange, who won two U.S. Opens, wrote an article in Golf Digest about that. Curtis was an outstanding ball striker. He had a very bent left arm at the top of his backswing. But he had one of the straightest left arms you will ever see at impact.

I learned about this early in my career. In my first year on the PGA Tour, I bought a regular-eight movie camera and took movies of many of the best players on Tour. I was the only player who did that for many years. At some point I discovered that the more a player bent his left arm at the top of his backswing, the more his left arm usually was straight at impact.

Arnold Palmer was one of the few really great players who sometimes (everybody doesn’t always swing the same way all their lives which I can prove by my hundreds of films) had a bent left arm at impact. But again, Arnold swung closed-to-open or maybe it would be better to say closed-to-block. That’s why he had what most people thought was an odd-looking finish.

Players who have lots of arm swing on their downswing and release the club a lot with their hands have a very straight left arm at impact. I think Rory McIlroy is an example of this. The result is that they can hit high shots. Most pros who block hit the ball low. Ben Hogan hit the ball low without blocking. He just kept the club head from releasing much on his follow through. But like I said, Ben Hogan had a very straight left arm at impact, and there’s never been anyone (not even Moe) who could hit the ball as straight and far as Hogan could.

September 8, 2019
Will Democracy Last? Daniel Says It Will
Next Post