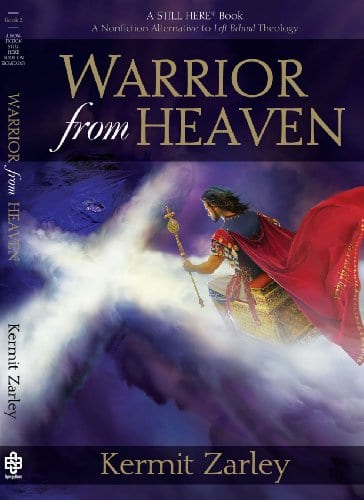 I just discovered an eleven-year old Goodreads book review by Sarah Sammis that I believe grossly misrepresents my book Warrior from Heaven, which is Book 2 in my Still Here series on biblical eschatology. Book 3 in this series, Moses Predicted COVID-19, was just published this month with KDP and is available at amazon.com.

Goodreads is a social cataloging website that mostly lists, reviews, and recommends books. It was founded in 2006 and acquired by amazon.com in 2013. Last year, Goodreads claimed it had 90 million members who are book readers. Goodreads has guidelines for its reviewers. It says reviews will remain on their website and never be removed unless they violate those guidelines. But they do not prohibit reviewers from misrepresenting a book or being hostile to the book’s subject matter. And such organizations, including amazon, provide no recourse for authors to refute misrepresentations.

BookPros published Warrior from Heaven in early 2009. Apparently, BookPros sent an unsolicited copy of the book to Goodreads and their reviewer Sarah Sammis received it. She says in her review, published by Goodreads on March 18, 2009, that the book “has my blood boiling.” She adds, “My initial impulse was to recycle the book without acknowledging its arrival but I feel its [sic] better to let my readers know just how terrible this book is.”

In my opinion, this shockingly negative review misrepresents my book several times, a unique book that represents fifty years of study of end times Bible prophecies. It appears from Sammis’s review that she either dislikes or hates Christianity. I object to Goodreads having someone review a book who hates its subject matter, which is the second coming of Christ and all Bible predictions after that event. For example, if such an organization has someone review a book about domesticated dogs, why would they have a dog-hater review the book? Such a decision discredits that organization.

Sarah Sammis begins her review by saying, “There is a small minority of Christians who are obsessed with Revelations and the so-called ‘end of days’ prophecies.” I disagree with that. The Apostles Creed and all major church creeds mention belief in the second coming of Christ. And Sammis does not identify “Revelations.” The Bible is full of “revelations.” She seems to refer to the last book in the Bible, titled Revelation, not Revelations, which she calls “the most whacked out book in the New Testament.”

Sammis then quotes from my Preface, which says biblical prophecies “are the most difficult portion of the Bible to interpret.” She then says, “Of course, though, this book will be able to accomplish that Herculean task!” This is an unjustified statement that further reveals her hostility. I make no such claim. I merely attempt to interpret these prophecies just as any Bible interpreter does. Everyone who reads the Bible tries to understand its meaning, and in so doing they are interpreting it.

Sarah’s next paragraph begins, “The very first chapter starts off with Christianity’s biggest flaw, namely, that only Christians will make it into Heaven at the end of days.” My first chapter is not about that subject at all, and this statement suggests that she has not fully read the book. The subject of God raising people from the dead to meet Jesus in the air at his second coming is in Chapter Three. Furthermore, not only does my book not say Christians go to Heaven then or any time, I don’t believe any human beings, except Jesus, have ever, or will ever, go to heaven. Rather, the book says the resurrected people of God will go into the “holy New Jerusalem,” which comes down from heaven near earth at that time (Revelation 21-22). And Sarah then confuses this issue by referring to this as the earthly “Jerusalem,” which I clearly differentiate.

Sarah then says, “The book tries to dance around the unpleasant truths of Christian hatred to non-Christians.” This subject does not appear in the book whatsoever, so that she introduces this hotly debate issue without justification.

Sarah’s next paragraph says, “The book goes on to explain how we should be wary of a [sic] peace talks in the Middle East.” The book does not mention this subject either. Sarah seems to refer to a belief held by Christian Zionists. I wrote a book, published thirty years ago, on the Israeli-Palestinian conflict that has a chapter refuting their viewpoint on this, in which I support a two-state solution, thus talks.

Ms. Sammis then adds to her above sentence, “the man who brings them together (and will be from there) will be Gog (Anti-Christ). The book does not say this at all, which is a view Christian Zionists often trumpet. Neither does the book say the Gog the Antichrist will originate from the land of Israel. The book does say “Gog” in Ezekiel 38-39 is the Antichrist. But the book says his place of origin will be central Turkey. These misrepresentations of the book suggest that either Ms. Sammis did not fully read the book or she purposely falsifies what the book says.

Sammis’ last paragraph alleges that my book is an “incoherent rambling of the most whacked out book of the New Testament,”which  obviously refers to the book of Revelation in the Bible. My book has very little material about Revelation, such as its seals, trumpets, and bowls of judgment; rather, the book treats mostly end times prophecies in the Old Testament. Sammis says the book has “long quotes from the Bible slapped right onto the page with little thought to formatting.” I disagree. She further alleges “the ranting tone of the message.”

Some people do object to Warrior from Heaven because it portrays the returning Jesus as a warrior-king who destroys his enemies who have been executing perhaps billions of Christians and many Jews. (Their concept of the loving Jesus who, tells us to love our enemies and turn the other cheek, does not allow them to conceive of Jesus as a warrior-king. But Jesus, like God, responds to human beings according to existing circumstances.) Yet Ms. Sammis never even says she dislikes the book due this thesis.

In sum, I think Sarah Sammis’ review of my book, Warrior from Heaven, indicates that she has a strong dislike, if not hatred, of Christianity.