Trump and Jesus on Being a Loser: Part One of Three

Trump and Jesus on Being a Loser: Part One of Three November 29, 2020 Kermit Zarley

Republican President Donald Trump cannot accept losing the presidential election held nearly four weeks ago. Democratic President-elect Joe Biden gained nearly 7 million votes more than Trump did in the popular count. But that doesn’t count in the USA’s electoral system. In what counts–the Electoral College–Biden tallied 306 electoral votes to Trump’s 232. Biden only needed 270 electoral votes to win. Biden’s 306 electoral votes is the same number Trump garnered in 2016 in defeating Hilary Clinton to gain the presidency. Trump had called it “a landslide” victory; but now, he says Biden didn’t even win.

President Trump still repeatedly alleges that the election was a “fraud;” yet he is unable to provide any substantial evidence to prove such an unprecedented allegation in which he unashamedly undermines our elections and thereby our very democracy. In Trump’s efforts to overturn this election, he has filed about two dozen lawsuits against various states by charging fraud and has lost all but one of them. And it concerned a menial issue that had no effect whatsoever on the outcome of the election.

So, President Donald Trump refuses to do the traditional and right thing in U.S. presidential elections by conceding defeat to the obvious winner Mr. Biden. The reason is that all throughout Donald Trump’s life, he reportedly has refused to admit that he ever was a “loser” at anything. Moreover, we have seen him as president call various political opponents, or merely people who disagree with him, “a loser.”

Jack O’Donnell managed Donald Trump’s Atlantic City casino for years. The New York Times reported Friday about an interview it conducted in which O’Donnell said of his former boss, “The first thing he calls someone who has wronged him is ‘a loser.’ That’s his main attack word. The worst thing in his world would be a loser. To avoid being called ‘a loser,’ he will do or say anything.”

Donald Trump’s presidency has been a real life story playing out before us that demonstrates some profound teachings of Jesus of Nazareth that are in such vivid contrast to Trump’s philosophy about life. Put another way, Trump is such a prominent figure in our time who typifies the antithesis of some of Jesus’ teachings. For example, Trump refuses to admit losing because for him, winning is everything. As we sometimes hear, “the world loves winners.” Trump seeks the adulation of the world, and to him he gets it by winning.

In the eyes of the unbelieving world, Jesus was no more than a great big loser. He had been the firstborn of a large family who lived in a small village in the tiny country of Judea in the land of Israel (Luke 2.7; Matthew 12.46-50; John 2.5). [Contrary to Roman Catholicism, “firstborn” indicates Mary had other children,] He had no formal education and thus no training in rabbinical schools (Matthew 13.54-56). Jesus was just a, nationally, unknown carpenter until about age thirty (Luke 3.23).

Then Jesus decided to leave home to conduct an itinerant ministry, traveling about only in his tiny country without hardly any financial support as a sage and a healer. Although he chose twelve apostles, gathered some large crowds, and created quite a reputation for himself, his mission only lasted about two or three years. And during this brief time, he never did the main things that make people famous. For instance, he never traveled far, never held a public office or religious position, never marshaled an army, and never wrote a book.

According to the New Testament gospels, the official, religious council at Jerusalem, called The Sanhedrin, collaborated with Roman political authorities to have Jesus arrested. The Sanhedrin then examined him through the night and judged him, according to their Law, as a blasphemer deserving of death. They convinced Governor Pontius Pilate to have him crucified, and that’s what happened.

Thus, like a common criminal or slave, Jesus died a horrendous, dishonorable, and scandalous death on a cross. The Romans crucified tens of thousands of such people every year throughout their empire for many decades. Jews later wrote in their Talmud about this Yeshua the Nazarene, “He practiced sorcery and enticed Israel to apostasy” (Sanhedrin 43).

Indeed, everyone should do themselves a favor by pondering the wise sayings of Jesus. Some of them may be difficult for us to understand because they go against what we have wrongly thought about life. But I believe Jesus’ sayings indicate so convincingly that he was sent by God.

Now, we are seeing how being a loser and finishing last, as Jesus had taught, are being played out before our eyes in the life of Donald Trump. For Trump, being a loser is the worst thing of all. But for Jesus, anyone who is a loser for his sake in this world will be a winner in the world-to-come. 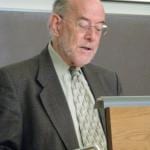 December 4, 2020 Dunn on Jesus' "I Am" Sayings in John
Recent Comments
0 | Leave a Comment
Browse Our Archives
get the latest from
Kermit Zarley Blog
Sign up for our newsletter
POPULAR AT PATHEOS Progressive Christian
1