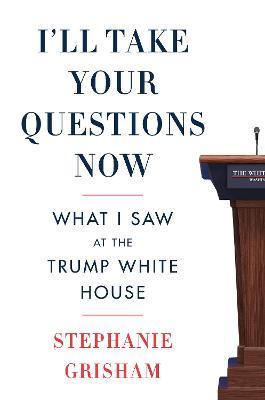 I have been perplexed by the title of the book about to be released entitled, I’ll Take Your Questions Now. It is by former President Trump’s communications director and press secretary Stephanie Grisham. She was known for never conducting a televised press event with reporters. But now she will do it with this book. Why?

She reveals in the book, “I knew that sooner or later the president would want me to tell the public something that was not true or that would make me sound like a lunatic.” Ha! That is funny. Makes sense. Her publisher, Harper Collins, calls the book “The most frank and intimate portrait of the Trump White House yet.”

So, another Tump book. How many are there? Here comes another one next week by Yours Truly with a spin I don’t think anyone has:

September 30, 2021 Vaccine Mandates Are Working, Moral, and Legal
Recent Comments
0 | Leave a Comment
"Good article, shame the rest of your articles are filled with servile and/or symptoms of ..."
TakeYourFreedomsBack Is Charlie Munger Right about Elon ..."
"I like the fact that the 1600 year old Roman religion they cobbled together in ..."
rationalobservations? Review of Jeff Deuble’s Book, “Christ ..."
"You said, "Jesus appeared to Mary Magdalene late on Sabbath evening as recounted in Matthew." ..."
Bob Shiloh The Historical Reliability of the Gospel ..."
"You cannot read very well can you? All four Gospels agree that Mary and the ..."
Bob Shiloh The Historical Reliability of the Gospel ..."
Browse Our Archives
get the latest updates from
Kermit Zarley Blog
and the Patheos
Progressive Christian
Channel
Related posts from Kermit Zarley Blog