Franklin Graham is right, there is sin in the homosexual lifestyle

The other day Franklin Graham, in a self-righteous, power-coveting, ignorance-laced, fear-inducing rant on Facebook garnered over 147,000 likes, 58,000 shares and 18,000 comments by with a post about the sin of homosexuality.

And after much soul searching, prayer and study I’ve decided it’s time for me to tell the truth about the sin of the homosexual lifestyle.

Now hang on, I’m not saying what you may think I’m saying or what the Franklin Fundiepants might hope I’d be saying.

The sin of the homosexual lifestyle is being in the closet.

The sin of the homosexual lifestyle is others expecting us to remain in the closet.

No – there is only sin, which is being in a state of separation from others, self and God.

Over half a century ago Christian theologian and philosopher Paul Tillich wrote and preached a sermon called You Are Accepted.

“Do we realize that sin does not mean an immoral act, that “sin” should never be used in the plural, and that not our sins, but rather our sin is the great, all-pervading problem of our life? Do we still know that it is arrogant and erroneous to divide men by calling some “sinners” and others “righteous”? For by way of such a division, we can usually discover that we ourselves do not quite belong to the “sinner,” since we have avoided heavy sins, have made some progress in the control of this or that sin, and have been even even humble enough not to call ourselves righteous…

…this kind of thinking and feeling about sin is far removed from what the great religious tradition, both within and outside the Bible, has meant when it speaks of sin…

But there is good news. Coming out is holy!

“…separation among individual lives…” begins to dissolve when we come out to, bring our whole, true selves, to others.

Some folks will accept us, some will reject us. Eventually, I got my mamma back, but my Uncle Jimmy chooses to remain in a state of separation. The key is that we are honestly, fully giving ourselves in a way that separates no part of our truth.

“…separation of self from self…” ends when we come out to and learn to love ourselves.

Over time and with years of soul-searching, prayer and study I have not only been reconciled with myself, I have learned to love the body, mind and spirit I have been given in this lifetime.

“…and separation from the Ground of Being” is replaced with grace when we love God with our whole hearts, minds and souls, and our neighbors and ourselves.

Coming out has been a long, ongoing, daily process. It involves an iterative acceptance of who God created me to be, saying to those I love and to the world around me, “here I am, just as God created me, how can I help?” Both of these moves have, for me, been grounded in a palpable love for God and finally an acceptance of God’s unparalleled grace.

But really, I can’t say it better than Tillich, so let us return to his sermon. I pray that you can hear it. Really hear it.

“He who is able to love himself is able to love others also; he who has learned to overcome self-contempt has overcome contempt for others. But the depth of our separation lies in just the fact that we are not capable of a great and merciful divine love toward ourselves…In our tendency to abuse and destroy others, there is an open or hidden tendency to abuse and to destroy ourselves. Cruelty to others is always also cruelty towards ourselves.”Thus, the state of our whole life is estrangement from others and ourselves, because we are estranged from the Ground of our being, because we are estranged from the origin and aim of our life. We are separated from the mystery, the depth, and the greatness of our existence.”

He later goes on to say:

“Grace is just as difficult to describe as sin…In grace something is overcome; grace occurs “in spite of” something; grace occurs in spite of separation and estrangement. Grace is the reunion of life with life, the reconciliation of the self with itself. Grace is the acceptance of that which is rejected. Grace transforms fate into meaningful destiny; it changes guilt into confidence and courage.”

Hang in there, here’s the crux of the matter…

Sometimes at that moment a wave of light breaks into our darkness, and it is as though a voice were saying: “You are accepted. You are accepted, accepted by that which is greater than you, and the name of which you do not know. Do not ask for the name now; perhaps you will find it later. Do not try to do anything now; perhaps later you will do much. Do not seek for anything; do not perform anything; do not intend anything. Simply accept the fact that you are accepted!”

If that happens to us, we experience grace. After such an experience we may not be better than before, and we may not believe more than before. But everything is transformed. In that moment, grace conquers sin, and reconciliation bridges the gulf of estrangement. And nothing is demanded of this experience, no religious or moral or intellectual presupposition, nothing but acceptance.”

Sin is a state of separation from others, self and God. Thus, hiding from others, ourselves and God in the dark and lonely closet that denies a beautiful and blessed aspect of our sacred worth, is sin.

Coming out is grace.

Coming out is holy.

PS – Speaking of Franklin Graham…legalistic, power-hungry religious elite in collusion with the political state whipping the masses into a fear-based, murderous frenzy…where have I heard that story before? What could possibly go wrong? 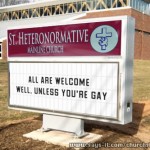 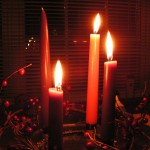 December 7, 2015 Advent Reflection in a Time of Terror: God is Waiting for US
Browse Our Archives
Related posts from Kimberly Knight