What ever happened to Hagoth?

What ever happened to Hagoth? February 19, 2012 Gina Colvin 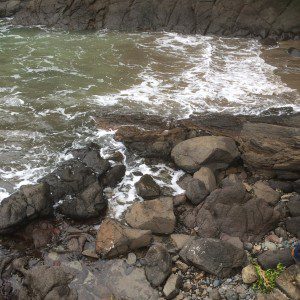 Last week I took a  group of teacher education students to one of our local marae.  Marae are uniquely Māori places which usually consist of a meeting house featuring ornate curve linear carvings that  tell stories of ancestors and their alliances.  Many marae  have  painted kowhaiwhai and weaved tukutuku (Google it) and are aesthetically unique and beautiful.  They are sacred venues involving a complex ritual of welcome and belonging.  This makes it  an ideal site to unsettle the ground of many non-Māori New Zealanders,  and have them confront some of the taken for granted assumptions about Otherness that is the terrain of being a  mostly white 7th generation settler class, who are largely oblivious to New Zealand’s indigenous and settler encounter history.

On this marae visit I shared with them a quote by Victor, a black man speaking to Dave, a white man,  in the documentary film by Lee Mun Wah, The Color of Fear (1992) who said:

‘Don’t expect me to trust you unless you are willing to be as changed and affected by my experience as I am daily by yours..’

The privilege of  being a racial, ethnic or cultural group at the political, economic, linguistic and social centre of society is that you can enjoy the illusion that what you are doing is ‘natural’ and ‘normal’, and you can choose or not  choose to be conscious of how you are seen or how you affect those at the social, political, cultural periphery.  I suggested that those at the periphery, including racial and ethnic minorities,  don’t have that privilege.   Rather, the periphery needs to deal with what WEB duBois argues, is a double consciousness.  As a black man he bore the weight of knowing who he was but was also burdened by the weight of consciousness as to how he was seen by white folk.   And that is at the heart of racial politics in the West.  As indigenous or ethnic minorities we have to know  how we are seen by the  dominant majority because it helps us to anticipate problems, it keeps us safe,  and in this day and age it keeps us off potential terrorist lists!

We at the periphery are used to being seen, evaluated and assessed, and so I  asked them if they would mind swapping places for a time.  Aside from a bit of resistance from one student who wept as she attempted to give me her CV of cultural competence and argued that it wasn’t necessary, most of the students were up to it and somewhat excited by the prospect.

As the small group of Māori and other ethnic minorities got together to respond to the question here are some of the things they came up with:

The groups who were responding to the question,  ‘How do you think you are seen by those at the periphery?’  were well off the mark.  They responded with things like:

The difference in the answers was a point for further discussion.  What appeared to be happening was that the dominant majority was suggesting that what they found to be the most socially reprehensible characteristics within their own group, was naturally how they would be evaluated by those on the outside.

Every social group manufactures its own rules and consents and characteristically there will be social trends across time that tests these boundaries. But that was wholly missing the point.    The fact of their intransigence and obliviousness at the centre was experienced as the most deeply problematic for those at the periphery, not errant social behaviours or lapses in personal standards.  Every social group has their intragroup issues and  it seems a natural consequence of the human condition, regardless of your social group.

At the heart of what we were talking about however was the need for the centre to become conscious of themselves as a force  that is not ‘normal’, ‘cultureless’, and ‘natural’, and that there is a necessity to apprehend and be aware of the centre’s effect on the periphery in what might seem the most innocuous and innocent of contexts.

It is with this in mind that  I wish to talk about Hagoth.

The Mormon’s weren’t the first people to  come up with this idea of a semitic origin for Māori.  Samuel Marsden, the first CMS missionary to New Zealand was touting it back in 1814.  This idea of being ancestrally related to an oppressed class of Israelites roaming landless in the wilderness was a compelling one,  particularly when settlers began appropriating Māori land through legislative violation in the 19th century.  Māori adaptations of the Christian/biblical tradition were extraordinary and are worth studying in their own right.  But the Mormons bought their own brand of relevance to their 19th century Christian preachings.  Not to be outdone by the Anglicans, Methodists,  Ratana  and Ringatu,  the missionaries adapted the story of the Book of Mormon to give  it some compelling local relevance.  In doing so they hit on the story of Hagoth.  A 55BC ship builder who sailed off the coast of America never to be heard of again.

We can probably thank the inimitable Matthew Cowley for the myth of Hagoth.   He was known for his theological creativity.  He had all kinds of transcendent experiences with Māori and for Māori which floated back to America, and before you know it a slew of General Authorities where coming to the Pacific Islands and saying such things as:

We humbly thank Thee that this building is erected in this land, so that those faithful Maoris who came here in early days, descendants of Father Lehi, may be remembered by their descendants.  (Hugh B Brown, closing prayer at they laying of the cornerstone of the New Zealand Temple.)

At the dedication of the New Zealand Temple on April 20, 1958 Gordon Hinckley stated:

“And so it seems to me rather clear that your ancestors moved northward and crossed a part of the South Pacific. You did not bring your records with you, but you brought much food and provisions. . . .I would like to say to you brethren and sisters of New Zealand, you are some of Hagoth’s people, and there is No Perhaps about it!’ “

So I grew up feeling somewhat proud of Native American connections and studied Thor Heyerdahl  and those of his ilk religiously in my 20’s.  Yet this active pursuit of an understanding as to the ancestral origins of Māori has not over the intervening years lead me to Israel or South America at all, rather it has lead me to the Lapita culture of the Bismark Archipelago, to Melanesia, a West- East migration from Asia (including Taiwan) to  Fiji, Samoa and Tonga. And an eventual migration from Eastern Polynesia where the roots of the typically Māori material and linguistic culture began to take hold.

So this puts me in an interesting position.  None of these stories of Hagoth have been officially repudiated.  In the LDS News it was stated that these stories of Hagoth are not official statements of doctrine, and I suppose that’s an out (albeit a bit of a Johnny-come-lately one).  So, on the one hand there is this lingering story of Maori semitic origins the likes of which Herewini Jones touts,  and on the other hand there is some strong and compelling evidence which suggests there to be a flowering of a unique Polynesian linguistic and material culture and tradition from traces around the North and Eastern Pacific rim.

I’m certainly not insisting that a nice chap called Hagoth didn’t jump into a boat and run into an atoll and have his way with some lovely wahine.  I’m simply saying that once again the centre has sought to appropriate the cultural histories and ancestries of the periphery in order to harness our loyalty and to colonise our identity.  Most evidence suggests that if there was a Jew floating in the Pacific sharing his love about then his genetic legacy is not that pronounced and that Hawaiki is probably not Jerusalem.

As a Māori woman I’m called upon to carefully navigate the terrain of  my religion,  my  intellectual pursuits, and my cultural identity and none of them are a neat fit.  As I resist the popular representations of my religious tradition I risk rendering myself a ‘spiritual’ outsider by neglecting  or even challenging what has become a sacred and beloved account of my origins.  The hardest part of this is that the centre is oblivious to the tensions their historical pronouncements have created.  Nobody can hold them to account for the pronouncements and they simply don’t have a ‘those guys were wrong’ or ‘perhaps they spoke hastily’ in their religious vernacular.

The Hagoth myth is as intransigent as the Great Fleet myth and the Moriori myth.  All of which have been largely discredited or bear some very prominent question marks over them. However, all of  them have held because they serve some function in either the cultural politics of New Zealand or the religious politics of  the Church in New Zealand.

While we have a cultural centre in our religious tradition, while we have chains of command, and while we are dominated by a religious oligarchy that disavows the claims of the periphery (including an intellectual tradition)  by the maintenance of an impenetrable discursive fortress, we will always have to battle with our own double consciousness.  Mormonism has a rich and expansive religious tradition to offer, but until our cultural centre is as willing to be changed by the experience of those at the periphery, as we are everyday by those at the centre, both trust and relevance will continue to be tenuous.

And so, I salute Hagoth and his ancient seafaring expertise.  It sounds like those of my ancestors who came from the other direction and made their way into Te Moana Nui a Kiwa!  I wonder if they met up?

February 12, 2012
Why its better not to be so certain that 'the church is true'
Next Post

February 22, 2012 One year on, one Mormon and one hell of an earthquake
Recent Comments
0 | Leave a Comment
"For tough times? This was made a year ago. Has the Church donated billions in ..."
Spencer Hoarding the Sacrifices of the Ordinary
""Kiwimormon" So called intellectuals are pretty ignorant. May 2021 Gates couldn't save their marriage. How ..."
Once were warrior Hoarding the Sacrifices of the Ordinary
"The BoM account in Alma 63 doesn't mention the destination of those "ships", indeed, whoever ..."
Douglas Self What ever happened to Hagoth?
"There's no certainty that Hagoth himself was aboard any of these ships; nor that the ..."
Douglas Self What ever happened to Hagoth?
Browse Our Archives
get the latest from
KiwiMormon
Sign up for our newsletter
Related posts from KiwiMormon