Utah: Where being a brown brother with a pen can cost you your life

Utah has one of the most sizable Pacific Island populations in the United States of America outside of California.  In Utah the most significant Pasifika communities are Tongan and Samoan.  Where New Zealand and Australia both have substantial Polynesian communities, migration to Utah has had an appeal for Mormons inasmuch as families have seen it as an opportunity  to maintain close ties to their religious community, as well as pursue what they see as broader economic and education opportunities.

However, pursuing opportunities is one thing, but doing so in an environment that is largely white, patriarchal and conservative is another.  And predictably the education system is one of the most effective sites in communicating to young minority men that they are seen as a threat to the order of social things.    In Salt Lake City the Polynesian community is largely located in and around West Valley City (the South Auckland of Utah), and it is here that Pasifika youth tribes (gangs)  have emerged out of the perfect cocktail of poverty, social, cultural and linguistic alienation, and institutional racism.  In these gangs they turn their fury in on each other providing for their members both a place of belonging, and a front for social resistance and economic contest.   Their methods are crude and anti-social, but that’s what happens when you fail to give minority kids the language they need to make sense of the broader reality of their lives,  you strip away their cultural and economic capital and you make their material presence a matter of loathing.   They get pissed off. 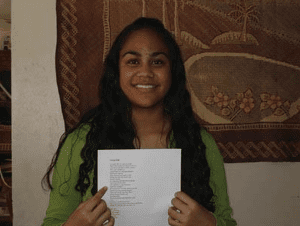 Moana Uluave (Tonga) grew up in Glendale, Utah.  Today she is a Bill Gates Millennium Scholar at Harvard University.  Moana served her mission in Auckland, New Zealand mostly assigned to the South Auckland area and maintains a huge affection for the country that challenged her to understand her Tongan and Pasifika identity in new and empowering ways.  But it was also  in New Zealand that she noted some of the similarities between South Auckland and West Valley.  What follow’s is Moana’s (cross-posted) letter to Siale Angilau who was shot two weeks ago in court because:

‘He had rushed towards the witness with a pen in an “aggressive, threatening manner”.’

A U.S. marshal shot and killed a Pacific Islander gang member Monday when the defendant tried to attack a witness with a pen inside the new federal courthouse in Salt Lake City.

Siale Angilau, 25, a member of the Tongan Crip Gang, was shot several times in the chest about 9:25 a.m. MT after charging the witness [a fellow TCG member] in an “aggressive, threatening manner,” the FBI said. He died several hours later at a hospital. –USA Today

It’s been ten years since we attended high school together—the high school we were bused to on the rich white East side of Salt Lake City.  We hardly knew each other. I was always tucked away in a corner writing in my black and white speckled notebook.  You were surrounded by boys who respected and girls who crushed.

You died this week.  Shot eight times by a courtroom marshal when you reached for a pen at the defense table. And you weren’t even supposed to be there. Your guilty plea had already been heard at the state level, but the federal courts wanted you too. Wanted you and the whole Tongan Crip Gang. So they used as a witness, a brother turned foe, and riled you up, then took you down.

While you lay heaving on a gurney, I sat in a lightly air-conditioned classroom at Harvard University where I was learning how to save black and brown poor kids from their own selves. “Give them a pen,” I say, “it’s the only way to save them.” I dreamt of coming to Harvard ever since I was a kid and my mother gave me a pen and paper and said, Go and write the world.  I thought if I can just get there, just get here, it would mean something—I would mean something. I could re-write the narrative of the working-class brown kids from the Westside of Salt Lake City who were all bad and no good.

But it’s the pen that killed you. The media took your image, plastered it across the country, called you a “known danger,” made you a footnote to the story everyone already knows, evidence of the pathology of brown bodies.

They say you were the problem. They say now that you’re gone our Salt Lake City community is safe from the savage gangsters, safe from hate, safe from violence. But what about the ones who shot you? We Westsiders hide from their bullets guided by the narrative that brought you down. We hide our boys that look like you deep in our hearts so they won’t get them too.

Most accept the narrative that tells us that killing brown-skinned men like you will save the family, the community. But few seem to notice the dismantling of our family–the Tongan family. It has been unraveling since we came to this country. When our mothers became maids and caregivers, our fathers, landscapers and builders of other people’s homes and other people’s dreams, and we had to be grateful because we believed it was just a matter of time when it’d be our homes and our dreams.

Years later, when our parents, sick and tired, turned back to repair their own disintegrating homes, we were gone. We already found out those homes and dreams were never going to be ours. So we took to the streets.

Siale, is that why you reached for the pen?

We underestimated the story behind the bullets. You knew you did some bad things and you weren’t trying to excuse yourself. You lunged forward knowing the punishment was never going to match the crime. Was it worth the risk? I wish I could’ve written you into a more submissive part in the story. Head down, your please and thank yous in place. Be friendly, but not too friendly—lest they misread your kindness for trickery. Cover your tattoos with white collared shirts. Behave for the teacher, then the police officer, and finally the judge.

But your spirit was too big, too strong, too knowing of injustice. You had to do things your own way.

I followed the narrative, stayed in my corner, in my books. Started on my way to suburbia—separate, token, gritty, lucky, and afraid.  Afraid that you might be right, that three letters behind my name wouldn’t change the fact that I was a working-class kid from the Westside of Salt Lake City and will always be. And I needed to own it, not re-write it.

My Facebook feed is filled with your image. I’m reconnecting with our old high school friends. Sharing story and struggle, the beautiful and the difficult. The Tongan family is mourning together; we’re seeing each other, again. No news coverage here. We will write the wrongs on our timeline.

Funny thing though as skewed as the news is they got one thing right about you, the judge, the marshal, the jury too. The most dangerous person in the United States of America is a brown body armed with a pen.

And from one  brown sister to another dead  brown brother:

April 16, 2014
Reflections after Temple Square: Furious musings from the periphery
Next Post

May 5, 2014 Mormon mystics and managers: The traces of Joseph and Brigham in us
Recent Comments
0 | Leave a Comment
Browse Our Archives
Follow Us!