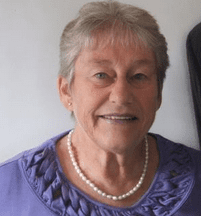 My mother-in-law, Shirley, died a week ago.  At the same time as we have been processing her death and all that it means to our family, hovering over me has been the shadow of a different kind of death – the excommunication of Kate Kelly, of Margaret Toscano, of Lavina Fielding Anderson and all of  those women who dared.

As we gathered our sons around Shirley’s still warm but lifeless body, my 10 year old clung to me and sobbed,

“I want my nana back, bring her back, make her alive again!”

“I can’t do that son, nobody can, she’s on her way.  Dying is something that we are all born to do, her time on earth with us is over, as ours will be one day.”

My fellow sisters and I had the privilege of preparing her for burial.  We, a few of her closest friends and loved ones, dressed her body, garment upon garment, each layer a tender reminder that while death is deeply sad, it is also sacred.   This one final act of grace and compassion for our sister reverently performed by women’s hands, with prayers upon women’s lips, songs sung in women’s voices, we clothed Shirley in the robes of the holy priesthood.

And then she was brought back to our home on Sunday where the women’s calls, the karanga, reached out into the cool evening air penetrating the veil bringing her body and her lingering spirit into our house.  There she lay amidst  the scent of flowers, the flickering of candles and the photographs of those who had gone before as we sang to her and spoke to her, our tears running freely as we clung to each other in a bond of love and grief.  And for two days people came, to cry and remember.

On Monday morning Finn emerged from his bedroom,

“Is she still dead?”  He asked, keen to know if there had been any change in Shirley’s situation.

“Because its our spirits that keep us warm, and alive.  If our bodies give up on us, our spirits move on.  Nana’s heart gave up on her, and her spirit left.”

On Tuesday, immediately before her funeral, we gathered around her,  gazed upon her face through eyes wet with tears, one final time, drew down her temple veil, closed the coffin, while my sons each took a shining silver handle and guided her into an overflowing chapel where we recalled with great fondness and affection the life of Shirley Kaye Rosalie Van Ballegooie, nee Lucking, formerly McCluskey.   In her eulogy, Raylene, our relief society president, concluded,  “Was Shirley perfect?  No, she wasn’t.  But she was perfect for us.”

Against this scene of physical death, narratives about spiritual death have been playing out in my heart and mind over the last week.  In experiencing so viscerally the pain of physical death, I have had cause to wonder why anyone would choose to inflict a spiritual death upon another soul?  Why would anyone choose to end, of their own volition, another’s connection to their spiritual home, their people, their community. The harder I have felt Shirley’s physical death, the more painfully I have felt for those cut off from the body of Christ and the more sickened I have been at those who have cheered and celebrated this act of spiritual violence with such delight and pleasure. And I wonder, is this what the body of Christ has become?

I wept as I told my son that I couldn’t bring his nana back to life, and I weep again as I proclaim.

“Kate Kelly, Margaret Toscano, and Lavina Fielding Anderson, you are not excommunicated. You are my sisters, utterly, fully, and magnificently in full fellowship with me and mine. And I choose to act upon the basis that you, each of you, is spiritually alive in Christ, a member of the body of Christ, a member of my church. I claim you as my sisters, and I hereby unexcommunicate you all.”

I do this because each spirit who loves the Lord, who loves their fellow sisters and brothers are needed to keep the body of the church alive in Christ.  Each spirit is needed, the rowdy and rebellious ones like me, the loving and gentle ones like Shirley, those who ask for fairness and justice like Kate, those who point out ecclesiastical abuse like Lavina, those who argue for the divine feminine like Margaret.  All who have chosen the road less travelled are needed to keep the body of Christ alive, meaningful and vital.

I didn’t tell Shirley that I was going to Temple Square in April to walk with my OW sisters and brothers.  She thought I had gone for a conference trip and was in Salt Lake to attend the inaugural Women’s session, but as the photographs came through on Facebook she put two and two together and had worked herself up into a bit of a lather by the time I returned back to New Zealand.  “What’s this all about?”  She demanded gently but with a furrowed brow.

I sat down with her and we talked while she asked questions.   I told her that while I wasn’t entirely sold on the ordination of women, I did support any action to end inequality against women in the church.

She was thoughtful for a bit.  “Quite right dear!  Those men get away with far too much in the church and they jolly well need to listen to the women much more than they do!  Good on you dear, good on you!”

July 8, 2014 Saving Zion from America: Theorizing in the aftermath
Recent Comments
0 | Leave a Comment
"Spencer I would tell you to google what they're doing in the relief space and ..."
Winston McCarthy Hoarding the Sacrifices of the Ordinary
"For tough times? This was made a year ago. Has the Church donated billions in ..."
Spencer Hoarding the Sacrifices of the Ordinary
""Kiwimormon" So called intellectuals are pretty ignorant. May 2021 Gates couldn't save their marriage. How ..."
Once were warrior Hoarding the Sacrifices of the Ordinary
"The BoM account in Alma 63 doesn't mention the destination of those "ships", indeed, whoever ..."
Douglas Self What ever happened to Hagoth?
Browse Our Archives
get the latest from
Latter-day Saint
Sign up for our newsletter
Related posts from KiwiMormon