Saving Zion from America: Theorizing in the aftermath 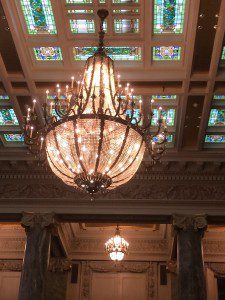 I’ve been thinking about Zion.

I am one of a few fortunate Mormon feminists,   I have a bishop and a Stake President who are first and foremost disposed toward love and mercy before judgment and punishment.   They don’t agree with me on several points, but what defines their ministry is inclusion rather than exclusion.  Despite our differences of opinion on some matters I have never felt unwanted, or unneeded.  I have never seen a flicker of irritation cross their faces, nor have they expressed their love for me through gritted teeth, with words that don’t match the feeling in their eyes.  As a consequence I feel that I belong at church.  They have allowed me to be me, and have genuinely loved and listened to me and my concerns –  and their example has in turn inspired me.  I feel that despite my more radical tendencies, despite the fact that I am admittedly and openly full of challenge, I have a place in the Zion of my dreams.

But I know of plenty of men and women who have lost in the game of leadership roulette.  I also know of many who are suffering because they have no power to influence, talk back to, or question the kind of leadership they are subject to.  Their Zion seems to be predicated only upon obedience or exclusion, deference or excision.

But, while I am currently fortunate, I may not be in the future.  Next month, next year or in the years to come I could have a terrifying bishop, or a misogynistic stake president who love  their authority more than they love me.  In which case my efforts to build Zion will be unwanted and I will be cast aside, my longing for Zion lost in a maelstrom of recrimination.

My question is:  How welcome are those who raise a challenge to the church to be better, to be more like Zion?  How welcome are those who want to make Mormonism a home for the lost and the weary, a place where regardless of class, gender or race  ‘all alike unto God’?  It would appear that some in their pursuit of  Zion believe that it is not necessary to accommodate the outspoken or  those who are no longer satisfied with the status quo.   What follows is a list of practices and procedures currently supported and sustained by the powers that be in the management of the church’s current crisis – perhaps in an effort to establish Zion?:

In my analysis of this situation it would therefore seem that there are enough people in the LDS church who believe that Zion can only come forth in an atmosphere of paranoia, fear, discipline and ecclesiastical terror.

I would however venture to implicate a broader ideological strain in Mormonism for this growing fear.   America, I would argue has spawned this church, it hosts this church, it produces it leaders, and as an institution it is legally  constituted as an American corporation.  Thus, by virtue of America, Mormon culture is afflicted by a tendency toward binary thinking  rather than a broad and nuanced way of imagining a world or a Zion that is motivated toward generating a common social good.  Rather, the tendency toward imagining a world constituted as in-out;  black-white; North-South,; Democrat-Republican; rich-poor; Christian-Muslim; true-false; capitalist-socialist;  straight-gay; patriot–traitor; American- un-American, right-wrong afflicts and binds America to a narrowly defined ideology and a poverty stricken discourse.

Despite that,  I choose to believe in a Zion that transcends binaries and includes rather than excludes, privileges the least of us and measures its social arrangements based upon its ability to respond generously to otherness, individual need, and diversity; a Zion that collapses hierarchies and eschews the age old tendency toward spiritual wickedness in high places.

Historically ‘America’ has been conflated with ‘the promised land’ or ‘Zion’, but as an observer of America for most of my life if America once had some moral high ground to stand on, some justification for calling itself so, I would argue that it can no longer do so with impunity.   The America of the recent past has proven itself to be cruel  in a kind of hokey sort of dangerous, surreal way.  With unfettered access to guns;  a star spangled flag; soaring aphorisms about America this and America that,  the USA has brazenly hitched itself to God.  With this cacophony of maxims and cultural practices at their discursive disposal America can feel justified in bombing a foreign territory to smithereens in the morning and washing all of the guilt down with a, prayer, a hamburger, fries and coke at the end of the day, while watching a favorite Disney movie.  In the same way, the church that calls itself Zion, the church that America spawned can excommunicate a woman for wanting equal rights for females, and the men flicking the switch on her can profess they are doing it out of love  – with a gentle smile and a well-meaning squeeze of the hand.

All of this cultural incongruity coupled with a sprawling sea of untrained, callow and often misguided male guardians of church law and order does not inspire tremendous amounts of faith in the patriarchy we Mormon feminists are supposed to be swooning over in aphorisms of divine deference.   Neither does it inspire faith that Zion is near.   Rather, injustice, exclusivity, and the use of arbitrary and punitive power might make well-suited bedfellows but in the long run they don’t necessarily win one moral authority and respect.  If anything, the LDS church has most recently lost respect in the same way that America has lost international veneration over its devastatingly misguided actions in Iraq and Afghanistan, Yemen, Libya, Somalia etc. etc.  If America is not Zion, and the church is bound up with America, then Zion is not possible without taking the church and Jesus out of America, perhaps physically but definitely symbolically.

All of this comes back to my original point that presently the church doesn’t feel, look or behave like Zion, perhaps in small pockets and places, here and there, but sadly not generally, not universally.

In the church’s unquestioned support for the patriarchal status quo it is has unwittingly confirmed the worst suspicions of its detractors –  that certainty in the status quo is its own form of tyranny, that Mormon women really do have something to complain about, and that Zion is a long, long way away.