A Conversation with Kate Kelly: Feminist and Optimist 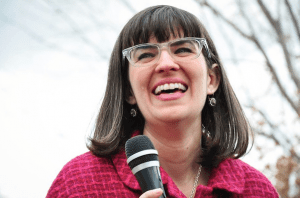 Kate Kelly, a recently excommunicated Mormon feminist, is the founder of Ordain Women. Though she has attracted significant media attention she still remains a bit of an enigma. A staunch apologist for the fundamentals of Mormon theology she holds doggedly to the doctrines of continuing revelation and open cannon. At the same time she is an unapologetic feminist and activist.

In this podcast interview (posted at ‘A Thoughtful Faith‘)  I talk to Kate about her feminist awakenings, the development of Ordain Women, her church discipline and her hopes for the future. An archetypal idealist Kelly’s irrepressible optimism and faith shines. For Kelly the question of equal rights and ordination for women are issues that are far from settled. Kelly’s thoughtful faith is reflected in her belief that her excommunication doesn’t mean the end for her and others’ pursuit for equity and fairness in the church. Rather, her excommunication signals that the conversation is merely at a beginning.

July 8, 2014
Saving Zion from America: Theorizing in the aftermath
Next Post

August 2, 2014 Church Leadership and the Dilemma of Dementia
Recent Comments
0 | Leave a Comment
Browse Our Archives
get the latest from
Latter-day Saint
Sign up for our newsletter
Related posts from KiwiMormon