There are No Gays in Heaven?

Guest post by Mike Cammock – a New Zealand  born Vermont marriage transplant.  He is very determined about not entirely losing his New Zealand accent and he regularly loses his two children in the snow.

For the better part of a decade my broader religious experience as a Mormon has been repeatedly sidetracked by public expression and action against the homosexual community from the highest leaders of my faith. Mormonism has opposed homosexuality as an existential threat, reinforcing homosexuality’s inherent immorality. In addition to existential objections, church leaders have also championed against the rights of homosexual persons by engaging the broader church resources in political and legislative actions that oppose gay marriage.

Mormonism’s insistence that “practicing homosexuality” is sin, especially within the bonds of a loving committed monogamous relationship, is indicative of a theological reality that Mormon leaders clearly believe, but never directly articulate: There Are No Gays In Heaven.

In wrestling with my uncertainty regarding the Church’s position on the issue of homosexuality, I have reflected on Mormonism’s recent history with Civil Rights. In the 1960’s, while some religious clergy from around the United States were throwing off the vestiges of Christian racial prejudice and responding to the invitation to march with Martin Luther King and support equality for African Americans, Mormonism, in contrast, was teaching that “blacks” could only get to heaven as servants. The church was actively restricting black men and women from full membership by prohibiting access to the temple and the priesthood. We were engaged in what appeared to be a doctrinally driven battle against the equality of people of African descent.

As I contemplated and “ponderized” this history I realized that my present uncertainty regarding the church’s stance on homosexuality stems from my religious tradition’s recent history on the wrong side of social change. For many, the LDS church’s historical track-record has lead to an erosion of trust in Mormonism’s credibility and moral authority on issues of social equality and social change. When Mormon members intuition runs contrary to the policies of our leaders many are no longer able to implicitly trust the church’s prejudice over their own conscience. On the issue of homosexuality we are being asked to actively judge another based purely on the content of their sexual identity. We are being asked to teach this judgement to our children. We are being asked to do this based on the doctrinally driven assertion that homosexuality is wrong in the eyes of God.

However, similar to the process employed during “the Church and the Negro” debate, serious theological inquiry and doctrinal effort is distressingly absent from our current religious process. In the current discourse on homosexuality, we appear to be relying on basic scriptural proof texting in defence of a pre-existing bias. This is frequently combined with superficial doctrinal exposition leading to justifications shockingly less well supported than the central religious rationale for the exclusion of blacks from priesthood. It appears that present-day Mormonism has not engaged in the hard theological work required to foster trust in the theological judgements and discriminatory doctrines that we are being asked to accept. Our leaders have not built the relationship of trust required for us walk with them, unquestioningly, as they lead us down the path of prejudice and discrimination, despite their claiming the mantle of theological certitude.

Equally problematic is the recognition that the church has been driven to address the issue of homosexuality, not out of a desire to explore our own theological inconsistencies, nor out of the need to engage the hard question of whether our own bias and culture may have us at odds with Christ. Instead we have arrived in this heated debate driven by the fear that our institutional status quo may be at risk. If the church desires to build credibility regarding it’s theology and doctrine on homosexuality, Mormon leadership must move the discussion past this politically motivated power struggle and begin the hard-work of engaging with the reality that the discourse on homosexuality is a matter of great theological importance, and that there is work still to be done.

Currently the church’s reason for engagement with homosexuality appears very simple: Currently homosexuality is recognized as sin, and all persons “practicing” homosexuality are excluded from our church community. Political change risks that discriminatory authority. The church is protecting it’s right to continue the current exclusionary practices. The Church urgently needs to start engaging in the real substance of it’s present position: We exclude Gays. Christ loves all. What are we to make of world in which Christ’s love and our exclusion coexist. What is it about the ontology of Mormon cosmology that justifies the expulsion of otherwise Christlike homosexuals from heaven? We have not even begun to engage in the hard theological work needed to justify our discriminatory policies.

In the face of a theological and doctrinal vacuum on homosexuality, it appears that some Mormon leaders are opting to sidestep the hard work of real theological inquiry. Instead they are doubling-down by appealing to divine authority, suggesting the status quo is directly from God. Instead of Joseph Smith era revelation where questions and answers were recorded, pondered, and revised, presented to saints and then wrestled with some more, LDS members are being asked to accept a simple, “we know this prejudice is of God, and now you do as well because I have told you”.

The absence of concrete revelatory theology and doctrine supporting this prejudice is simply ignored. There is no self-reflexive recognition that we are walking the same tight rope today that we did on black ordination, although this time with even less theological and doctrinal impetus. Furthermore, it appears members who are struggling to support the status quo are subtly marginalized as potential victims of the “servants of satan”, while those asking for more revelation and work on this issue are being framed as, “denying the spirit of prophecy and of revelation” and simply not being obedient.

It may be time to ask ourselves if we are holding our theological stewards to the high standard of challenging our bias and bigotry, rather than simply confirming it. When the revelation of today is indistinguishable from the bigotry of our youth we ought to cautiously and respectfully ask for more verification, rather than complacently and gladly accept.

The church’s disposition toward administrative capacity may be choking off the theological life blood of the Mormon church. Instead of the revelatory creativity of Joseph Smith’s restoration, we are settling for institutional security and protecting the status quo, potentially at the expense of urgently needed theological inquiry and engagement. We have played petty politics with this issue too long. There is work to be done to prove the Lord herewith. I believe there is theology to explore, revelation to inquire after, and new sections of the Doctrine and Covenants to be penned. Instead, we are writing legal briefs and playing friends to the court in an effort to protect a right to discriminate that our leaders tell us is essential to our religion, despite being based on limited and incomplete doctrinal and theological grounds.

I do not believe my leaders have done enough for me to walk with them down this road of discrimination and judgement. It feels too wrong, the fruits are too sour. The sacred heart of Mormonism is deeper and better than this. The Christ Mormonism has taught me to love seems diametrically opposed to the continued actions of my church on this issue. 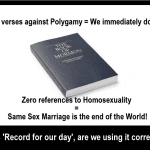 January 11, 2016
God is Silent on Same Sex Marriage – How Opinion Turns into Doctrine
Next Post

January 25, 2016 What will it mean to be Maori and Mormon in 2050?
Recent Comments
0 | Leave a Comment
Browse Our Archives
get the latest from
KiwiMormon
Sign up for our newsletter
Related posts from KiwiMormon