How I Failed My Mormon Sabbatical

How I Failed My Mormon Sabbatical March 25, 2016 Gina Colvin 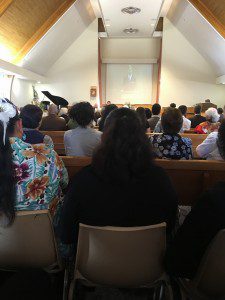 At the end of last year I tearfully thrust my Temple Recommend into my Bishop’s hands, I stopped wearing temple garments and I gave myself permission to walk away.

Like many, I’d had years of feeling like the breath was being sucked out of me as I pulled into the meetinghouse car park; years of feeling as though my head would explode every time I went to sacrament meeting or Sunday School. I’d had years of sorting and sifting and manipulating doctrines, policies, mythologies, cultural practices, silences, spiritual abuses, violence and inequalities. I was choked with years of fury and sadness that the religion that had once had my heart was failing me, failing others and failing itself with its increasing insistence on blind obedience to its leadership, its grudging painful slow creep to historical transparency, its poor theology choked with contradiction, and its operations that seemed to treat the organization first and foremost like a business.

I raised the possibility of resignation with Nathan but I could see the fear, heavy and anxious in his eyes so I put the idea away – ‘for the time being’ – I said to myself.   I wanted it to be over. I wanted to stop thinking, caring, writing and talking about Mormonism.    I’ve always been honest about the fact that I’m a God girl so for me the solution was simple – go and find another religious home and recover from everything that is soul wrenchingly at odds with my desperate wish to spiritually flourish.

Sometimes people call their leave taking a sabbatical when really they don’t want to be known as inactive or they want to use a gentler term with their terrified and confused family members.   While I wanted to run I was happy to keep the door open just a sliver – just incase. But when I published my Open Letter to My Ward I was confident that, that was it.

Almost six months later I’m back at church and have been a regular for the last couple of months. I had to come clean with one of my Facebook communities that I had more or less failed my sabbatical – I’m actually a Mormon regular. Many have asked me how I am making it work. So here’s my explanation.

Firstly, we make a lot of free agency in our Mormon rhetoric but we prefer the use of compulsion.  When I did an inventory of the suite of obligations I was under I realized that I was drowning under the crushing weight of being made to give up my body and my brain to ideas and practices that were increasingly suffocating my spirit’s need for liberation. When I went through the list of controls imposed upon my body, boundaries placed around my intellect, threats upon my spiritual yearnings I decided I had to unravel from the heavy obligation I felt to embody a Mormonism that seemed to make sense for everyone but me. Taking myself back to choice, rather than fear and obligation was emancipating. Yes its risky. Training myself to be conscious of my choices and sorting them into ‘yes’, ‘no’ , and ‘doesn’t matter’ is hard painful work.

When calculating the sheer number of choices we make because of a sense of obligation to a church we entrust with our life direction can be overwhelming.  Newly assessing a marriage made because of some historical spiritual promptings or community pressure in a religious context you no longer trust can be jarring at best and devastating at worst.  Looking at the children you have but being honest about the fact that, that isn’t necessarily how many you wanted or can happily and comfortably manage can be downright disturbing. Assessing education and career decisions made and not made because of an injunction for boys to be lawyers when they wanted to be writers, and girls to be stay at home mothers when they wanted to be physicians can be crushing.  Calculating the cost of a Temple Recommend over the years when you realize that you’ve been funding a multi-billion dollar corporation that has got fat and rich from the sacrifice of its people while all the while you have struggled at times to feed your family can be infuriating.   Realizing that you have been a self-righteous, judgmental, know it all prig with non-Mormon friends who were actually probably nicer than you can be humiliating. Suddenly comprehending that the very truth claims you built your life around were shot through with misrepresentations can cause one to callous over with cynicism.   And watching the Upper Rooms produce and then back a brutal and alienating policy that screams ‘wrong’ can cause you to feel that what you thought was home was actually hostile territory.   Once the patriarchy has been seen you can’t unsee it and this can feel diminishing as a woman.

I’ll be at church on Sunday because I have accepted that for most there isn’t a single story of Mormonism. It’s not all good but its not all bad either and in weighing the balance I’m going for the devil I know. All religions have their awful. The LDS Church is no different. But I do think we have a special kind of good in the Mormonism. There is a strain of generous sociality and spiritual expansiveness that bubbles up from the grassroots and constantly eclipses the shadows. Yes it can be boring, yes it can be oppressive, yes it can be incomprehensibly stupid, but it can also be fascinating, liberating, and wildly interesting as well.

I’ll be at Church on Sunday because as it happens on the eve of my leave taking and by some gift of cosmic generosity I sat down to interview Thomas McConkie, author of Mormon Faith Crisis: A Simple Developmental Map. His was a gentle invitation for me to see my crisis, my need to leave the burning house as it were, not as a spiritually cataclysmic event but a natural part of my growth. He challenged me to hold my own and others’ stages of faith development with patience and compassion.   Having a framework in which I could see my crisis of faith as intuitive and productive was transformative.   Thomas and I have since spent countless hours in conversation growing ideas, challenging each other and enjoying a bespoke camaraderie that has caused both of our Mormonisms to feel more expansive and pregnant with spiritual possibility.

I’ll be at church on Sunday because I belong to support groups that are my soft place to fall – where my journey doesn’t feel so lonely.   There are many, many people who I have met on social media who have become friends in life and for life. We hear each other, we honor each other and we genuinely love and give strength to each other in the most beautifully Mormon of ways no matter where our journey has lead us. These off-beat online Mormon communities might raise the hackles of some General Authorities who see them as a spiritual abyss but they are a boon to those who feel they have struggled alone in the dark for too long.

Sunday will find me on the pews because I’ve been reading, meditating, thinking and engaging with larger ideas about the soul than can be found in the LDS curriculum.  Post-modernity has bought with it a raft of possibilities, questions and concerns about truth, belief, justice, ethics, morality and relevancy for more faith traditions than Mormonism. This moment in time is probably one of the most convulsive in religious history, but its also one of the most powerful as we come to community agreements about who God is to us both collectively and individually.   I accept that I am one person in a tiny faith community within a faith system among faith systems grappling with big, big questions – and that’s electrifying.

I’ll be there on Sunday because I’m not afraid of who I am nor of who I’m becoming. Mie Inouye used the terms Temple Mormon and Zion Mormon in a recent article. I found that useful. For the time being I’m an Independent Zion Mormon. Right now I don’t particularly want to go to the Temple mostly because I don’t have positive feelings about the interview – but that might change.  Besides which I had a fitful start to my newly minted liberation from rule bound Mormonism – one that I’m not entirely proud of and one that stopped almost as soon as it began (my apologies to those who had to witness my plunge) so I’m not sure I’d qualify.  Of course all of this makes me exceptionally hard to use in ward service. But that’s fine. I’ve had years of leadership and teaching – I’m enjoying the break.

I’ll be there because my ward community hasn’t made me feel as though I don’t belong and has given me space to journey – wherever that might lead.  Some have been white knuckled around me but for the most part I still feel loved.

I’ll be there on Sunday because throughout my careening, staggering, and restless spiritual journey Nathan has been my soft place to fall even when his Mormon heart has been breaking. I’ll be there on Sunday to lean my head into his shoulder when the going gets rough, he’ll squeeze my knee with encouragement and we’ll say something silly to each other to relieve the tension – as we always do – and I’ll be assured once again that he chooses me – with, or without the church.

I’ll be there on Sunday because if I’m honest that’s where I belong and that’s where God wants me this week.   Of that I have a testimony.

March 4, 2016
Why this KiwiMormon would Vote for Bernie Sanders if I Could
Next Post

May 1, 2016 Tyler Glenn and Jeffery Holland: The Power and the Limits of Anger
Recent Comments
0 | Leave a Comment
Browse Our Archives
get the latest from
KiwiMormon
Sign up for our newsletter
Related posts from KiwiMormon