Over the years the LDS Church has used the labour and money of poor, brown folk to build temples and schools around the world.  A couple of generations later it is shutting these same people out from the communities they created to make the Church property environs look beautiful.

Here’s a case in point: 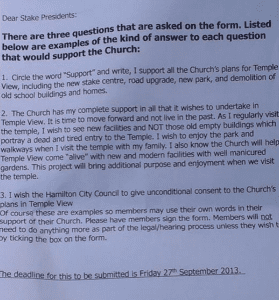 Temple View is the village that grew up around the New Zealand Temple and Church College of New Zealand. In 2009 the College was closed and debates in the community about land and building use on the former school site began to circulate.

The LDS Church Trust Board (as is its legal designation in New Zealand) wanted to develop the school area adjacent to the community, but a preservation society wanted to keep as many of the facilities as they could (which were built by mostly Māori labour missionaries). Soon Temple View was divided between those who supported the Trust Board and those who argued for the CCNZ site as having important historical significance for the people who built their lives around the school and village.

The Trust Board/Church’s goal was to gentrify and beautify the lush semi-rural area that leads up to the Temple and to create a new housing subdivision on the sprawling grounds beneath.  Yet getting there has not been straightforward.  Some brave souls in the local community with strong ties to the area put up a courageous defence against having the historical traces of family and history erased from the landscape in the interests of property development, only to experience a shocking push back.

Some people opposing the Trust Board have been threatened with church discipline, some people have lost homes and jobs. Families have been divided, and a community has been upended.  Sure the Trust Board has offered sweetners, like a brand new multi-stake centre, but it’s also been caught coercing and manipulating folks to get what they want.

Resource consent from the local council is required for the development, and to get this the Trust Board had to show it had support from members of the church. So they held ‘firesides’ in the region in which they lead people to believe that the development was indeed God’s work. They concluded this fireside by asking that people sign council submissions that emphatically gave their support to the church.

The Trust Board is selling lots on the road leading up to the temple but in order to get ‘the right kind of owner,’  they have imposed an impossible list of restrictive covenants (recently released by MormonLeaks) on potential property owners. The reality is that few people could raise a mortgage because of the covenants, so that means only cash buyers will be able to purchase. Breaking the covenants on the land will earn you a $50,000 fine – unless you can get a waiver – for instance, if you were a General Authority…

This long and complicated case is strewn with story after story of ecclesiastical abuse,  nepotism, financial waste, social engineering, community displacement, and the absolute determination of the church, at whatever cost, to turn what has been a largely Māori Mormon community into a White upper-middle-class satellite suburb of Hamilton. Apparently, all of this is done in the service of Jesus Christ and apparently my pointing this out means I’m not sustaining the Prophet, or Jesus as the Redeemer of the world.  For some this has meant a tenuous relationship with their local ecclesiastical leaders, some of whom seem convinced by the Trust Board/Church that God and or His prophet must be a real estate developer.

This case has really hit some New Zealand LDS folk hard. So many Māori lived in unspeakably awful conditions to build the school and the temple, always with the mantra – “Build Now for Eternity”.

Sadly, ‘eternity’ is much too long for LDS Inc. to wait.   As it happens Jesus and his corporate flunkies are more interested in a temple environment that looks high class than they are in protecting the importance of this area to the community; including many of those (mostly Māori) whose families sacrificed to build the temple and CCNZ in the first place.

Can Our Faith Literally Save Us?
Is it possible that our belief in God can help us in...
view all Latter-day Saint blogs
What Are Your Thoughts?leave a comment