On the twists and tangles of church: Reflections on Kirtland

A few days ago I sat in the Kirtland Temple.   It’s currently the only Mormon (or should I say an ‘Expression of the Restoration’)  temple in which I’m permitted entry.  So, it meant a lot to me to be in this place that stands in the cross-currents and energies of a tradition that formed me.

It felt like I was caught in a religious undertow and being there reminded me of where my spiritual roots are buried and where, like a rhizome, they lie in a twisted, tangled, beautiful, terrible web that has imprinted itself upon my soul.

Some Mormons are quick to assume that in receiving an Anglican baptism I’ve separated myself from the LDS church and that I advocate Anglicanism’s teachings.  They call me an apostate.   It is true that I serve my local Anglican community.   It is true that I take the chalice and it’s even true that I’m currently receiving spiritual direction from a Roman Catholic sister as I quietly discern a call to ministry.   But, I’m still very Mormon and I don’t see that changing any time soon.  Sitting in the Kirtland Temple reminded me of that.  I’ve been asked on several occasions whether or not I feel Anglican.  I don’t even know what that means.    I’m Mormon, spiritually birthed in the church’s eddies, its light, and its deep shadows.   As my formation continues in an Anglican community perhaps I will grow branches that are distinctively Anglican but my trunk and its roots will always be Mormon.

The Mormonism that is so much a part of me, got an out-breath sitting in the Kirtland Temple.  I felt in equal measure the horror and beauty of Joseph Smith’s theology, the church’s questionable early beginnings and the untamed wonder and chaos that spilled out into the lives of my tradition’s forebears.   I was equally furious at Joseph for his towering altars that symbolized the church’s ongoing idolatry of the priesthood.  I was also thrilled to know that I was sitting in the same place where early Mormon women sat, even if they were dehumanized by their being rendered currency in a sexual economy that I  disavow.

This sacred space kept so faithfully by the Community of Christ moved me deeply, reminding me that we are always in some flow between humanity’s wildness and humanity’s need for order and structure. 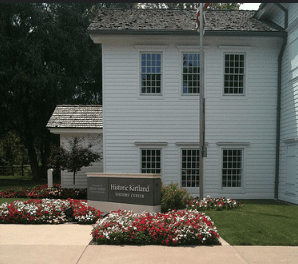 recreate a theology without the messy bits.    The history they told me was so obviously pitted and pockmarked with absences as to make their story incoherent.     Of course, they filled the deficiencies in their retellings with testimony.   That’s the common reflex;  paint over the incompleteness with affirmations of the faith.

I didn’t have the same feeling that I had at the Kirtland Temple.   Instead, I felt a heavy expectation to agree with the ‘clean’ script, to honor the naivete of the missionaries, who escorted me through the site, with nods of agreement.    The story of my faith tradition they told me was unrecognizable, inaccurate and scandalously incomplete.  But at the same time all of this, while cognitively infuriating,  was strangely comforting in its familiarity.

The LDS Church has painted itself into an unforgiving corner of certainty, violently retching out the uncertain as if in doing so they keep Zion ‘pure’ and their power to save untroubled.   But the LDS Church also keeps alive the wildness of it all in its insistence on personal revelation as the final arbiter of its claims.   The Community of Christ in Kirtland has squared up to its troubled past out of a sense of integrity, and in doing so they honor the faith’s past and all of us who are part of the restoration.    But at the same time, it struggles to remain organisationally viable.

I’ve been thinking about all of this in the context of my dual citizenship in two beautiful traditions because I can feel myself growing in this refusal to be wholly claimed by any one church.    One church declares its outrageous certainties without apology but at the same time, it points to the possibility of the wild spiritual more.  The other church walks the center line unashamedly and wonderfully but at the same time struggles to get community traction because of its wishy-washy commitments.  One church offers me a certain metaphor for God that has thick black lines around it, the other refuses to name the face of God as definitive.

Someone asked me recently if I thought the LDS Church was the only true church on the face of the earth.   I told him, “I think it has a place in the Body of Christ, but it’s not the whole body.”     In that way, I have made a  departure from Joseph who wanted to know ‘Which one of the church’s is true?’

But,  Kirtland reminded me that we each stand in the crosscurrents and energies of multiple traditions.  What if we opened ourselves up to the truth and error of it all and let all of their extremes float by while we searched out God in the space between?

What if we stopped limiting the Divine to the collective imagination of our churches?

What if God was more than Anglican, Community of Christ or LDS and our job was to harvest the best of it all?

Wouldn’t that sacred work of weaving and stitching together parts of parts of parts honor both the reformation and the restoration in the best possible way?

Sitting in the Kirtland Temple experiencing the madness and the sublime of the Restoration it occurred to me that truth is both transient and fluid.    Truth is that space in which we hold our own evolving, changing stories of the sacred.   And like the Kirtland Temple, we too need to refuse any single story of our becoming in order to be fully alive to the Divine’s work in us.