Grateful for 82 Years in the “American Miracle” but My Primary Allegiance Is Elsewhere July 3, 2018 Dr. David R. Mains

Discussing the “American Miracle” and our allegiance to it.

In his new book Suicide of the West (2018), Jonah Goldberg’s first sentence reads, “There is no God in this book.”

Defining his position further, he writes, “This book assumes that the Almighty does not guide human affairs…” That being said, I still found what he wrote to be both interesting and helpful.

Goldberg contends that the history of man has not been all that pretty. In fact, life for the vast majority of those on our planet has been more brutal than most realize.

For example, back in ancient days, when human beings were changing from hunter-gatherers to living in more settled agricultural communities, these people opened themselves to roving bandits who swept into their village locations and stole everything: crops, women, children and so on. Being plundered of their food and having their able-bodied men killed was catastrophic for such victims. 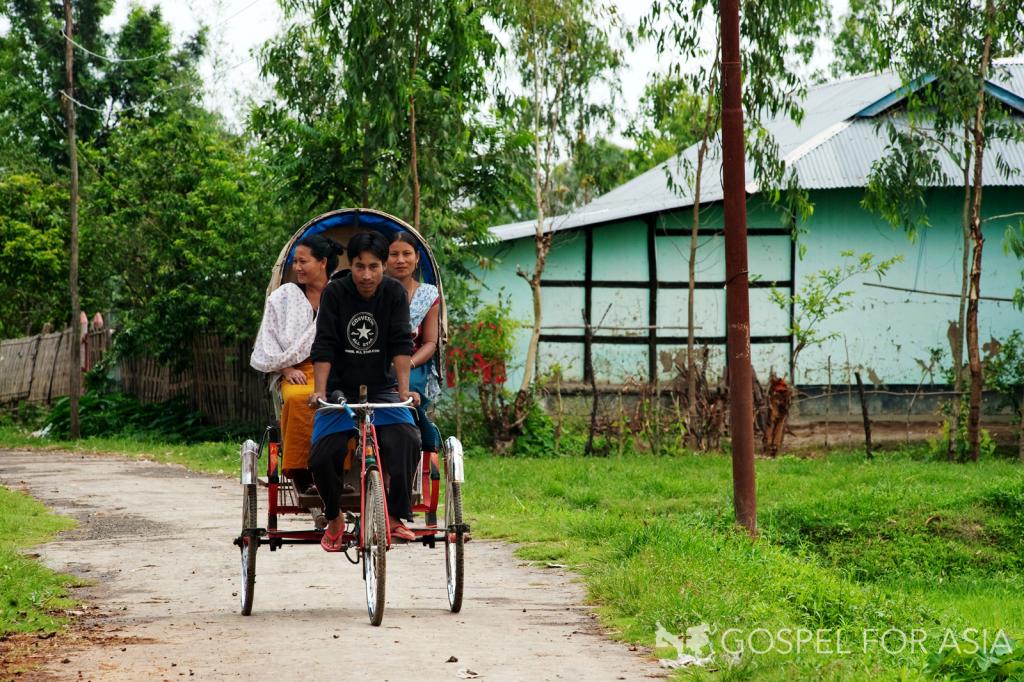 Because recovery took so long, this soon became a problem for the invaders as well. That’s because you can hardly return and attack the same location year after year. Before long, there’s not that much left to take!

That’s when Goldberg explains how the “stationary bandit” eventually became the solution to the problem of the roving bandits. A new insider warlord supposedly provided protection from the outsider bandit, and this introduced stability for the lives of the powerless. Unfortunately, the poor soon realized, given the nature of anyone with power, that they had to pay dearly for this service. Even so, they now believed they would at least have enough to live on and for the most part their lives would be spared. So the stationary bandit or ruler was at least an improvement over what had been before.

Fortunately, over time even these “stationary bandits” came to understand that taking 90 to 100% of a community’s wealth makes the overlord richer in the immediate, but what about next year? So these “protectors” soon learned to plunder a great deal of what was available, but to also leave just enough to make sure there would still be something to once again take for themselves in the following years.

In many respects this is how Goldberg’s tough look at the world’s history reads. Most people who have been a part of it have lived miserable and exceedingly difficult lives. The “haves” are always a relatively small number, and the “have-nots” represent most of mankind.

Part of the reason Goldberg begins this way, and he takes many pages to lay out his case, is to make his argument for how unique what he calls “The American Miracle” was, and how careful we must be to protect it.

Here is a sentence that for me jumped off the page when I read it. “The Americans rejected the perfectibility of man, believing the best government could do was take man’s nature into account and channel it toward productive ends.”

In this short space I fear I have not represented Goldberg’s careful work all that well. But through his  writing I was once again reminded of what an amazing nation America is, and what an incredible debt we owe to our founding fathers.

This 4th of July, when we again celebrate the publication of our Declaration of Independence, I am making it a special point to sincerely thank the Lord for the privilege I have had of living all of my almost 82 years as a citizen of this remarkable nation. It is obviously not a perfect place. But the freedoms and the good life this country has afforded convince me that this birthright of mine is not something to be taken lightly.

Unlike Goldberg, I would have a hard time dismissing for whatever reason God’s touch from the events of our nation, or for that matter from the history of our world. To hold Scripture as dear is to believe in the constant interplay between the divine and the human. It is also to be convinced that whenever or wherever man ignores God and His ways, it is to his detriment. And yes, that results in an existence that is nothing short of brutal.

I believe religion played a vital part in the lives of many of America’s founding fathers. This is not to say they were all devout followers of the Christ. But faith in God and specifically in Jesus and His teachings was often a key motivating factor in the lives of numbers of the colonial world-changers. This has also been true of both well-known and little-known believers down through the generations in ever so many places around the globe.

I would propose that an even more revolutionary world-changing proclamation was the message from Jesus about the Kingdom of God. There is no denying it: From the start, Jesus intended His mission to affect the entire earth for good. Not that He predicted the world would change overnight, or that great numbers would become part of this new kingdom. But He knew that in time His followers would profoundly affect societies everywhere. They were to play a strategic role in improving the well-being of the entire world!

How? Imagine an ever-increasing number of people who, because they bow to Christ as King and obey His will, give food to the hungry; clothe the naked; welcome the stranger; visit the sick; go to those in prison; forgive seventy times seven; love their neighbor as themselves and likewise their enemy; whose word is as good as an oath; who being forced to go one mile, will go two; who won’t commit adultery even in their minds; who are not anxious about material possessions; who don’t judge others; who pray for good; who work for justice; who live as servants; who, with hearts of love, are agents of reconciliation; and on whose lips is the good news of God’s forgiveness. Well … such people will influence their world and profoundly!

You see, Jesus never expected sinful people to maintain a high moral standard. He asked, quite realistically, “Can a bad tree bear good fruit?” But with the proclamation of His Kingdom, He offered hope for the world. Forgiveness for sin was available from God Himself. The lifestyle most beneficial to all was clearly spelled out—love for the Lord and love for one’s neighbor. On top of that, power to enflesh this ideal was available through the Holy Spirit. So Christ’s Kingdom members were to set a whole new standard for fallen mankind.

The truth is, the fate of the world’s goodness literally hinged on the success of this new kingdom. Its members were extremely important because they were society’s hope. And that’s not my idea—it was Christ’s. 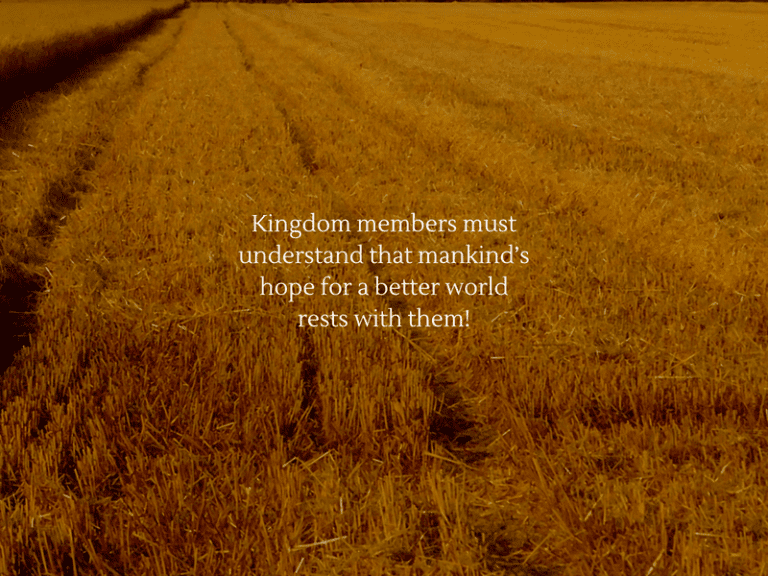 Jesus often made this clear. “You are the leaven,” He said, “that causes the whole of the loaf to rise!” “You are the salt of the earth”; that is, Kingdom members are the preserving element that keeps the world from going bad, or they add that “extra” flavoring that makes life more palatable. He said, “The eye is what lets light into the body. If the eye is bad, the whole body is in darkness.” Kingdom members were the eye of the body of mankind. “You are the city on the hill,” He preached, meaning that we are in a strategic position and cannot help but be seen. He also declared, “You are the light of the world. You illuminate the darkness for the benefit of everyone else.”

Christ was making it clear that Kingdom members must understand that mankind’s hope for a better world rested with them!

I will always be grateful for having been born in the United States of America. It is my native land. But it is not my primary allegiance. As much as I will again be moved this 4th of July by the many displays of the Stars and Stripes, or will feel proper pride when standing at attention while our national anthem is played, or appreciate moving words from an American spokesperson regarding the amazing Constitution that has served us so well all these decades . . . I will do well to keep in mind the incomparable privilege that is mine of being a part of the worldwide Kingdom introduced by the Son of God, a kingdom that existed long before my time, one that provided much of the moral base for this nation, and one I am sure will continue long after I am gone from this world, a Kingdom I feel so, so privileged to be a part of. 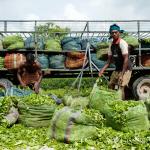 July 11, 2018 Every One of Us is Called by God for His Purposes
Recent Comments
0 | Leave a Comment
Browse Our Archives
get the latest updates from
Living in the Light of Eternity
and the Patheos
Evangelical
Channel
POPULAR AT PATHEOS Evangelical
1

Do "Rights" Limit or Empower the...
Cranach
Related posts from Living in the Light of Eternity