Balms and Kings: The Lectionary for the 18th Sunday after Pentecost

Balms and Kings: The Lectionary for the 18th Sunday after Pentecost September 12, 2016 Eric Smith

What It’s About: It’s funny how some passages of the bible enter into the common lexicon and popular imagination. It’s not always the most obvious parts of scripture that stick in our minds; sometimes it’s something unexpected. Everyone who has spent much time around churches (especially those with, um, traditional music programs) just started humming the tune to There Is A Balm in Gilead after reading that Jeremiah passage. The hymn is also known by its first line, “sometimes I feel discouraged,” and that’s a pretty good synopsis of Jeremiah’s predicament in this passage. The moment has come and gone when the prophet thought redemption might come, but still destruction and chaos reign. Verse 22, which in the NRSV is posed as a question and not as a declarative statement like the hymn, is a defiantly rhetorical question; yes, Jeremiah is saying, we will be comforted. Just not yet.

What It’s Really About: Jeremiah’s prophetic career overlapped with a bunch of traumatic history. Geopolitics conspired to make his life a very interesting one, and not very often a good way. He lived through revolts and uneasy truces, and ultimately through the destruction of Jerusalem by the Babylonians in 586/587 BCE. He saw some stuff in his life. And this lament, probably from sometime in the middle of all those experiences, is the kind of outcry that you might expect from someone asking whether their people will be saved. Is there anyone coming to heal us? Is there any hope?

What It’s Not About: Sometimes laments are not met with relief, and sometimes cries for help don’t get a response. Jeremiah’s words here didn’t bring down thunder from heaven or reinforcing armies from over the hillside. The people ended in destruction and death; Jeremiah saw them enter in to a period of exile and grieving. It’s hard to hear it as we sing the reassuring words of the hymn, but the balm in Gilead didn’t materialize in Jeremiah’s lifetime. A lot of people died. Why that was the case is a question at the heart of religion; why cries go unanswered today is no less difficult a question.

Maybe You Should Think About: These kinds of guttural cries for help, pleas for salvation, still happen today. They happen in war-torn places, in families wracked by violence, in communities plagued by crime, in people’s minds when they are not healthy. It is a foundational problem of Christian theology that most of these prayers seem to go unanswered. Maybe this passage could point us to a way to talk about that, instead of defaulting to the insipid “everything happens for a reason” pseudo-theology that plagues American Christianity. What would happen if we were honest: Jeremiah and many others suffered and died waiting for something to save them, and people still do today. What do we do with that?

What It’s About: If some passages of the bible have hymns written about them, others are somewhat forgettable…and this one from 1 Timothy fits that bill. (Someone will probably write to tell me there are tons of hymns written about this verse…but you get my point). This short section of 1 Timothy is kind of a grab-bag of feel-good ideas: pray for everyone, even kings, recognize Jesus’ role as mediator, lead a dignified and godly life. That’s all great. Perhaps the most memorable thing in this passage is the parenthetical remark about the author telling the truth, which is often a telltale sign that the text is pseudonymous. (Many scholars agree that 1 Timothy is pseudonymous).

What It’s Really About: The Christian tradition has struggled, from the beginning, with calibrating the proper relationship between church and state. Beginning with Jesus’ “render unto Caesar” remark and leading up through present-day Christian communities (Colin Kaepernick is hardly the first one to sit out a national anthem), Christians have tried to find the right balance of recognizing civil authority while also remaining loyal to God above all. Generally speaking, Christian attitudes toward the state got more friendly over the first few centuries of the faith, as it became clear that Jesus’ return wasn’t happening right away and that the church would need to endure. With the reign of Constantine, Christianity reached remarkable accommodation to the empire that had been severely persecuting the religion only a generation earlier. This passage from 1 Timothy was written long before then, of course, but verse 2 suggests a moment of recognition that Christian survival depended in part on getting along with the rest of the world.

What It’s Not About: This isn’t from the time of Paul, but from a slightly later time. When bible scholars say that Paul didn’t write the pastoral epistles (1 Timothy, 2 Timothy, and Titus), some people hear that as a dismissal. What it actually is, is more interesting than that. If this letter isn’t from the time of Paul, then it’s from a later period of Christianity, and it’s important data on what Christians were thinking and doing in those times–probably the early 2nd century. Paul didn’t write it, but some early Christian did, and the attitudes in this letter are fascinating for that reason.

Maybe You Should Think About: Verse 2 might be about church/state accommodation, but verse 5 is a hedge against that. “There is only one mediator” is a pretty strong shot across the bow of kings and emperors who claim to be the mediator for the gods. If there’s only one mediator between the divine and human worlds, and it’s Jesus, then it’s not Caesar. This was a pretty bold claim for that day and time. And although not too many leaders claim to be divine today, it’s still a challenge to civil authority. That’s why Mennonites and others don’t stand for the anthem, and that’s why many ministers (including myself) and congregations don’t allow flags in the sanctuary for worship–because there is one mediator, one ultimate loyalty, and it’s not any particular nation or leader.

What It’s About: Parables are not the most straightforward way of conveying information. Sometimes I wish Jesus had given lectures instead, or maybe handed out photocopied outlines of his positions. Parables are so sloppy; they are open to interpretation, sometimes confusing, and not very tidy as ways of teaching the right thing. But they are very good at provoking questions and interaction, which might be why Jesus used them so much. This parable is about a manager who was about to get fired, and went about forgiving debts so that everybody would like him once he got the boot. Except it turns out that his desperate act of self-preservation was appreciated by his boss, and it seems that all was well in the end. The interpretation of this parable is fairly controversial. Again, we wish Jesus had been a little less coy sometimes. But we’re still talking about it, right?

What It’s Really About: Some say that the manager had simply cut out his own commission from the debts, making them easier to pay and getting his boss his money back. I find that unlikely, given verse 6, where 100 jugs of oil becomes 50. Surely the manager’s cut was not 50% of the product. Assuming that the story doesn’t involve any commission-forgiving, then what is it about? Is the rich man happy at the end, or not? Does he commend the manager for his cleverness and fire him anyway, or does he commend him for getting some return on his investments, and maybe keep him on? Verse 9 seems to suggest that the manager was clever for building himself a golden parachute with all those folks out there with newly cancelled debts; verse 10 might suggest that the manager’s actions were faithful to his boss. It’s a mystery.

What It’s Not About: This is not evidence for a prosperity gospel. The prosperity gospel (the idea that the point of Christianity is that God wants you to be happy and wealthy) is insidious, and it never seems to be eradicated, no matter how many times it’s denounced and disproved. Avoid the temptation to preach this as a “screw people over and get rich in the process” sermon, or even a “work hard and be clever and get rich in the process” sermon. Any such interpretation must founder on verse 13.

Maybe You Should Think About: Verse 13 is the most well known part of this parable, and it’s the line by which Jesus sums up the teaching. “You cannot serve both God and wealth” is as clear as it gets. You have to choose one. 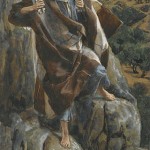 September 5, 2016
Lost and Sinful Things: The Lectionary for the Seventeenth Sunday after Pentecost
Next Post 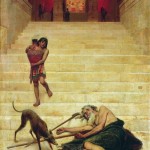