The topic here isn’t movies about zombies. It’s the use of dead actors in movies. Alexi Sargeant explains why digital resurrection is so creepy, using Peter Cushing’s reprise of the role of Grand Moff Tarkin in Rogue One as the key example.

Sargeant isn’t put off by the use of digital resurrections in extremis. If an actor dies mid-production, it makes some sense to finish the film with a digitized character.

Rogue One broke new ground: “There was no overwhelming narrative need to include Grand Moff Tarkin in this Star Wars story. The script has its own cast of bickering Imperial antagonists who could have lost command of the Death Star by the film’s end without the Grand Moff appearing in person to requisition it.”

Sargeant argues that this undermines the basic dynamics of acting: “a world in which dead actors mingle seamlessly onscreen with living ones, though it may sound exciting, denigrates the craft of acting. Acting is the art of presence. A digital resurrection, however well-intentioned or well-executed, has at its heart an absence.”

This is less than persuasive. After all, actors have been inter-acting with non-present monsters and objects for a long time. It might even be suggested that the very medium of film already breaks the link between acting and presence.

He’s on firmer ground when he argues that a digitized actor changes the viewer’s suspension of disbelief: “An acting teacher of mine passed on what she claimed was an old saying, advising actors to be ‘the real frog in the artificial garden.’ This means that the sets and costumes and given circumstances of a fictive world, be they ever so fanciful or abstract, are simply reality for one’s character. One should react as a real person would to these surroundings, telling the truth under imagined circumstances. This is not just a bargain the actor makes with the audience in exchange for the audience’s suspension of disbelief. The actor’s realness helps the audience to suspend disbelief, modeling what it is like to live in the reality of the story.”

How are we supposed to connect to a film where the frog is as artificial as the garden?

Digital resurrection also radically changes the relationship between director and actors. Actors aren’t “puppets of directors.” Sargeant recounts some incidents where Cushing persuaded a director to change a scene. The digitized Cushing won’t be doing that.

The technology in use affects the actor’s performance as well. To insert Cushing into the film, another actor wore a complicated contraption that recorded his facial and bodily moves; Cushing’s face was later superimposed on the results. The actor wasn’t playing Tarkin, or Cushing; he was playing Cushing playing Tarkin. As Sargeant says, “A performance of a performance is not a double remove, but something else entirely. CGI masks collapse the original actor into the role, making their successors not actors but imitators.”

Far and away his most penetrating arguments have to do with the treatment of the dead. We would protest, vigorously, at a director’s play to use the dead body of Cushing in a film. Shouldn’t we have the same respect for the form of the deceased actor, Peter Cushing?

Sergeant realizes that it seems a stretch to call this a violation of a religious taboo against desecration of corpses, but the objection assumes that a human is merely matter and not form: “If we concede that the human body has some sort of dignity, such that it is not appropriate, even in death, to treat it like any other piece of meat, then that dignity does not reside only in the matter or only in the form.”

Specifically, “Peter Cushing’s spare frame, sharp cheekbones, and long limbs are part of what made him him; they are essential to his Cushing-ness. Creating a convincing facsimile of his living, breathing, moving form after his death should not be undertaken lightly, any more than exhuming his corpse should be. The grave-robbing version is surely more egregious.”

The danger goes beyond the mere use of this particular technology. Zombie cinema “accelerates the degradation of the film industry into a soulless factory. And it gives a dangerous tool to purveyors of misinformation and harmful fantasy.”

The same technology is being used on living actors, to create age-variant depictions of the actor. Such technology opens the possibility that, for instance, someone could create a video of Trump calling on nuclear war with North Korea. Could we tell the zombie Trump from the real one?

In sum, “digital resurrection will have a baleful effect on Hollywood. It makes possible post-human performances that accelerate the transformation of film from art to product. There are already many forces within the film industry pushing its movies to be more and more slick, generic, and commercial.” Do we need another technology that will further his transformation? 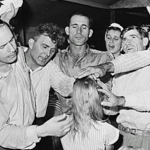 February 16, 2018 God of Metaphysics?
Recent Comments
0 | Leave a Comment
"NOOOOOO 😭😭Z.2633K.US/ab4859Z"
Moon-Lily Tamar the Righteous
"wow! pretty fast, i must sayf.636WN.CO/Nq4859U"
joeman123456 The Hidden One
"I ship them, come at me however u want I don't care. I want them ..."
TheEventHorizon Tamar the Righteous
"After reading it, I couldn't help thinking of my favorite book💯W.GEOGIPHY.COM/R4859m"
FaqSands Divine Simplicity: An Experimental Response
Browse Our Archives
Related posts from Leithart